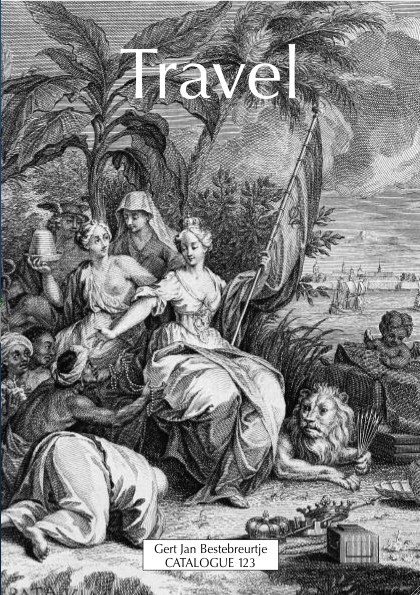 Newly issued Catalogue 123 from Gert Jan Bestebreurtje Antiquarian Bookseller of the Netherlands is now available. Copies may be downloaded directly from their website. The title is Travel, although it really seems broader to me. Having seen other Bestebreurtje catalogues, what surprised me was the quantity of English-language material, and Americana in particular. Bestebreurtje must have come across a collection on American slavery, as there is much material in this field, some of it quite obscure. We will focus primarily on this material because it is of serious interest to many American collectors. Those who do collect in this area should definitely download the catalogue and look through its offerings.

James Redpath was a Scottish immigrant to America who hooked up with the abolitionist movement in his early years. His writings came to the attention of Horace Greeley, who hired him as an editor for the New York Tribune. In 1856, Redpath went to Kansas to report on the battles between abolition and pro-slavery forces, and opened an abolitionist newspaper. It was there that he met John Brown, and became a great admirer of the northern white man who was willing to put everything, life included, on the line for freedom of the slaves. After Brown was executed for his raid on Harper's Ferry, Redpath wrote his biography, giving much of the proceeds to Brown's family. That book is, The public life of John Brown, with an autobiography of his childhood and youth, published in Boston in 1860. Item 152. €125 (Euros, or US dollar equivalent of $155).

Another vehement opponent of slavery was Senator Charles Sumner of Massachusetts. He helped form the anti-slavery Free Soil Party, led a legal challenge against segregation in Boston schools, and, in 1851, was elected to the senate. In 1856, after delivering a speech about the "crime against Kansas," where the slavery-abolition battle was being fought, he was severely beaten in his senate seat by a South Carolina congressman. It was another 3 1/2 years before Sumner was well enough to return to the senate. However, that did not stop his fiery antislavery speeches, or fighting for the rights of freed slaves once the Civil War was over. Indeed, he pushed Lincoln to free the slaves sooner, and once remarked that his opinions and Lincolns were the same, it just took Lincoln a bit longer to reach them. As one of the "Radical Republicans," Sumner led the unsuccessful attempt to impeach President Andrew Johnson. Sumner would become displeased with administration of President Grant, but remained in the senate until his death in 1874. Item 179 is Sumner's The barbarism of slavery...an 1863 printing by the Young Men's Republican Union of an 1860 speech he made on the senate floor. €75 (US $93).