The Islamic World from Antiquariaat Forum and Antiquariat Inlibris 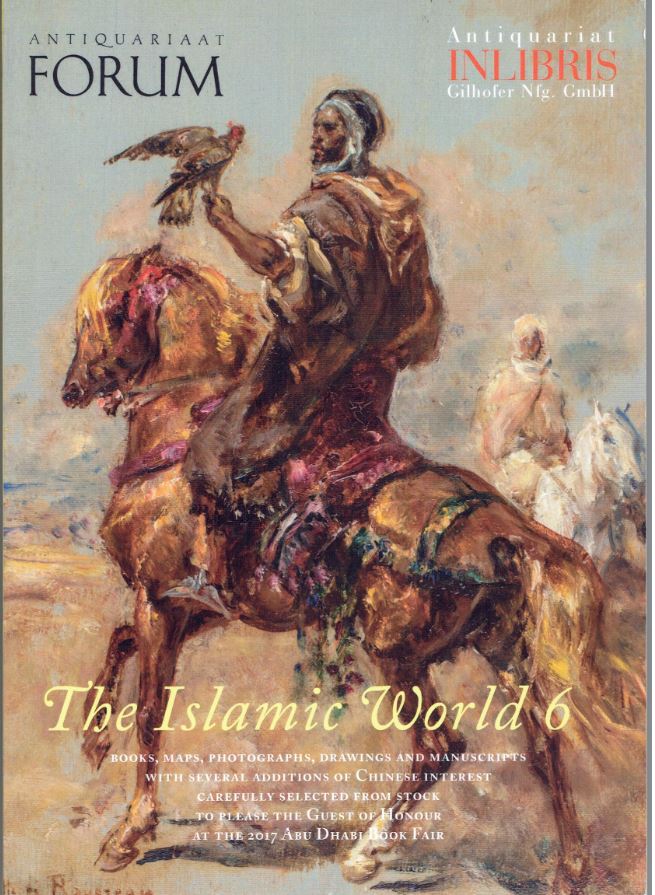 The Antiquariaat Forum, together with Antiquariat Inlibris, has issued a catalogue entitled The Islamic World 6. The "6" refers to the number of catalogues about the Islamic world they have produced. The subtitle notes that there is also a selection of Chinese interest, and that the material has been selected for the Abu Dhabi Book Fair. That explains the concentration of Islamic world material, which is primarily from the centers of that world – the Middle East and North Africa. However, there are also some items that I cannot really connect with the Islamic world – a rare inscribed copy of Marx's Das Kapital, or manuscripts in the hand of Beethoven and Schubert. My guess is they are here as they are of universal interest, even in Abu Dhabi. So be prepared for a few surprises when you open the pages of this catalogue. Now, here are a few samples.

Much of our oldest history emanates from Egypt and the Holy Land, and yet it was mostly a mystery to those in the West. Francis Frith was an early photographer, opening a studio in Liverpool in 1850. He recognized a desire for images more precise than paintings existed among people who never visited far off sights, so in 1856, he set out for Egypt to begin capturing the land on film. He had to use a large, bulky camera and primitive developing methods by today's standards, and yet he was able to capture the land as few had done before. He took three trips to these places and in 1858-59 published two volumes entitled Egypt and Palestine. Photographed and Described. It contains 76 photographs with a separate leaf of text for each. These are some of the earliest photographs of Aswan, Jerusalem, Bethlehem, Damascus, Luxor, Nazareth, Giza, Hebron, and many other locations. Item 55. Priced at €40,000 (euros, or approximately $43,471 in U.S. dollars).

Next is a volume containing the first two books on Arabic ever printed, Arte para ligeramente saber la lengua araviga... and Vocabulista aravigo en letra castellana. The two books are bound together, as they are usually found. These are the first published grammar and the first published vocabulary of the Arabic language. They were written by Pedro de Alacala, a Spanish monk, at the request of the Archbishop of Granada. They were published in 1505. It had only been a little over a decade earlier that Granada, the last Moorish outpost on the Iberian peninsula, had fallen to the Christians. Many of the Moors stayed on, so the Archbishop needed a means of learning their language so they could be converted. Item 128. €250,000 (US $271,815).

Everyone knows the meaning of the word "assassin," but it is unlikely most know where the word originated. The Assassins were an Islamic sect in Persia that formed in the 11th century. They were never powerful enough to form a standing army, but they had a warrior class who would provide sneak attacks on leaders of their enemies, assassinations, if you will. They came to be feared for their tactics. The Assassins' reputation reached the West when they were encountered by the Crusaders, and they were described by Marco Polo. They were eventually wiped out during the 13th century Mongol invasion, though some persisted and acted as mercenaries for some years thereafter. However, the sect's name has lived on as a descriptive word for their type of behavior. Item 66 is Die Geschichte der Assassinen aus morgenlandischen Quellen, by Joseph von Hammer-Purgstall, published in 1818. It is a history of the Assassins. Hammer-Purgstall compares them to fanatics of his own day, something which could be done in our day as well. He writes (translated) his plan is to give "a vivid account of the pernicious influence of secret societies under weak governments, and of the hideous abuse of religion for purposes of committing atrocities of unscrupulous ambition and unfettered despotism." Yes, that does sound familiar. €3,500 (US $3,805).

This next one might be out of your price range, but we will mention it anyway. It is a book of French Renaissance original watercolor drawings of birds, held in a modern box with the spine title Recueil de dessins d'oiseaux (collection of bird drawings). They predate Audubon by roughly three centuries, circa 1550-1560. They are attributed to Pierre Gourdelle. There are 50 leaves, most of which contain a drawing of one bird. A few have multiple drawings, resulting in a total of 58. There are falcons, hawks, eagles, owls, a vulture, numerous water and song birds, a parrot, parakeet and peacock among others. There is even a bat – perhaps he didn't know it was a mammal. A pelican is shown feeding its young with its own blood, a myth believed at the time. There is even a phoenix rising from the flames, one drawing we will assume he did not make from life. Little is known of Gourdelle, particularly at this point in his life. Later on, in the 1570's and 1580's, he was painting portraits and became a printer, along with working for Catherine de Medici. He married in 1583 and died in 1590. He did receive a mention in the book L'histoire de la nature des oyseaux by Pierre Belon, published in 1555. Belon acknowledges an indebtedness or contribution by Gourdelle, and several of these watercolors are close enough to drawings in that book that there is an evident connection. Others are quite different, and there are drawings in this collection and Belon's book not found in the other. Item 57. €2,800,000 (US $3,042,540).

Item 24 is a historic book. It was, appropriately enough, published in that most historic of cities for printing, Gutenberg's Mainz. The title is Peregrinatio in terram sanctum, the author Bernhard von Breydenbach, the publication date 1486 (first edition). This book is notable as the first illustrated travel account ever printed, and the first authentic Western source for the Near and Middle East based on someone who actually visited the area. Breydenbach traveled to Venice to embark upon a trip to the Holy Land with other pilgrims. He brought along two friends, one an interpreter and the other artist Erhard Reuwich. It is Reuwich's artwork that provides the visual documentation of the trip. He has illustrated people, animals, costumes, architecture, and other things he saw. Breydenbach was also able to bring back information from lands he did not visit because they met distant travelers who had also come to the Holy Land. The three set out in 1483 and returned via Egypt in 1484. This copy is not quite complete in its plates, which is why it is much less expensive than complete copies. €45,000 (US $48,904).