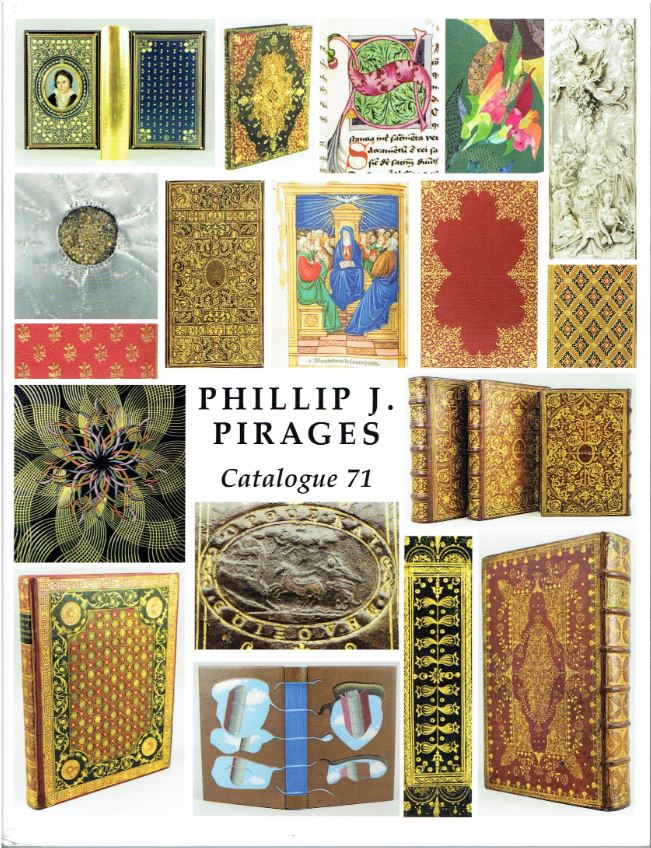 Phillip J. Pirages Fine Books and Manuscripts has issued their Catalogue 71: Historically Significant and Decorative Bindings From the 15th Century to the Present. Words escape me. One can coldly describe the art in terms of tooling and shapes and colors, and it's about as effective as describing the Sistine Chapel by paint types and colors. Something can be red and blue and be beautiful, or it can be ugly, which tells you how useful that information is. Fortunately, the catalogue includes pictures of the bindings, so you can see what the various elements look like as put together by the bookbinder. In most cases, it's spectacular. It's amazing what a skilled artist can produce.

That is not to say the books are not of interest for their text. Many are, a few aren't, but at least textual content is more amenable to textual descriptions than is art.

One thing of note is the evolution of bookbindings. For about four plus centuries of artistic binding, they feature various classically beautiful features in terms of raised bands, colors and gilt, leather and such. In more recent years, the styles have exploded, so that today, the bindings often reflect what is inside. A book on sheep is bound in the shape of a sheep. A Poe book contains a macabre binding. Classicism has been thrown out the window. Here is one final thought before we move to specific examples. No ebook will ever be able to brag of such fantastic bindings. Now for a few samples.

We begin with the oldest book in the catalogue, which is a bound manuscript rather than a printed book. The title is Sententiarum Libri IV, the "Four Sentences" of Peter Lombard. Lombard was a 12th century theologian, at one time Bishop of Paris. This may be the most important theological work of that century, continuing to be widely read until the 17th century. The manuscript itself in very attractive, with careful hand illuminated initials. It contains 288 leaves and was completed in 1463. This copy features a contemporary, unrestored binding, including its original metal fittings. It contains five brass bosses on the cover and raised bands. Item 1. Priced at $85,000.

Item 30 is an unusual book, The Consent of Time, Deciphering the Errors of the Grecians in Their Olympiads, the Uncertaine Computation of the Romanes... published in 1590. The author was Lodowick (or Ludovic) Lloyd, who held a sergeant at arms position under Queen Elizabeth I, and later James I. In this book, he looks at what he determined to be chronological errors made, not just by the Greeks and Romans, but in Persia, Spain, France and Turkey. While Lloyd's method "would not commend itself to a modern scholar," he still felt free to point out the shortcomings of others. Lloyd believed the chronology written in the Bible was infallible, what came later was found wanting. The beautifully bound book still has its original silk ties, and is emblazoned with the royal coat of arms. This leads one to think this book may have once belonged to Queen Elizabeth considering the binding, the royal coat of arms, and the Queen's friendship with Lloyd, though this is not known for certain. $15,000.

The pre-eminent binder of the Arts and Crafts movement would have to be Thomas Cobden-Sanderson. Cobden-Sanderson was encouraged to go into bookbinding by the movement's leading light and printer, William Morris. A total of 167 bindings were known to have been personally produced by him from 1884-1893 when he opened the Doves Bindery. At that point, health issues prevented Cobden-Sanderson from doing the bindings personally, but he brought in some of the most skilled artisans and he continued to design the bindings and supervise their production. Item 185 is The Celebrated Romance of the Stealing of the Mare, by Wilfrid Scawen Blunt, published in 1892, bound by the Doves Bindery. This work is from an old Arabic tale, translated by Lady Anne Blunt, and put to verse by her husband. Wilfrid Blunt wrote a lot of poetry that has been described as "uneven," was ahead of his time in opposing imperialism, which he figured was conducted not to lift up the colonized people but to make the colonists rich, but is mainly known for his numerous amorous affairs. He is said to have left "behind him a trail of seduced women, outraged husbands...and numerous illegitimate offspring." Somehow, Lady Anne, a granddaughter of Byron, put up with him for 37 years before finally separating. $1,950.

This next book comes from the noted English bindery firm of Sangorski & Sutcliffe. It is a third edition (1892) of the two-volume The Poetical Works of Percy Bysshe Shelley. Shelley had a much better reputation as a poet than did Blunt, primarily because of this compilation put together by his widow, Mary Shelley, after he drowned at a young age. There are features to this binding too numerous to mention, but Sangorski & Sutcliffe was noted for their Cosway bindings. These feature an inlaid ivory miniature portrait, in this case within a laurel frame with six semi-precious stones. The portrait is of Shelley. It appears on the doublure of the first volume. For those unfamiliar with the term "doublure," as I used to be, it is a leather version of a pastedown. Item 206. $12,500.

Here is one of those examples of a newer binding. It comes on the book Mr. Chesteron Comes to Tea, by Aidan Mackey, published in 1978. It is from a limited edition of 370 copies and is signed by Mackey. The book includes Mackey's essay accompanying previously unpublished drawings by G.K. Chesterton. Chesteron originally planned to be an illustrator, but later turned to writing. The binding by Angela James features a blue door with a brass knob and hinges on the cover. It can be opened to reveal Chesterton at tea. Item 230. $6,800.

Item 236 is Tales of Mystery and Imagination by Edgar Allan Poe, published in 1919. It is highlighted by an imaginative and macabre binding by Susan Allix. The cover features a silver dagger stabbed through the black leather. There is also an inserted round glass case containing a quail skull. The slipcase displays a mannequin's hand in a lace half-glove, the finger tips holding a rabbit's skull. This is an example of a binding that fits well with its author's work. $5,000.