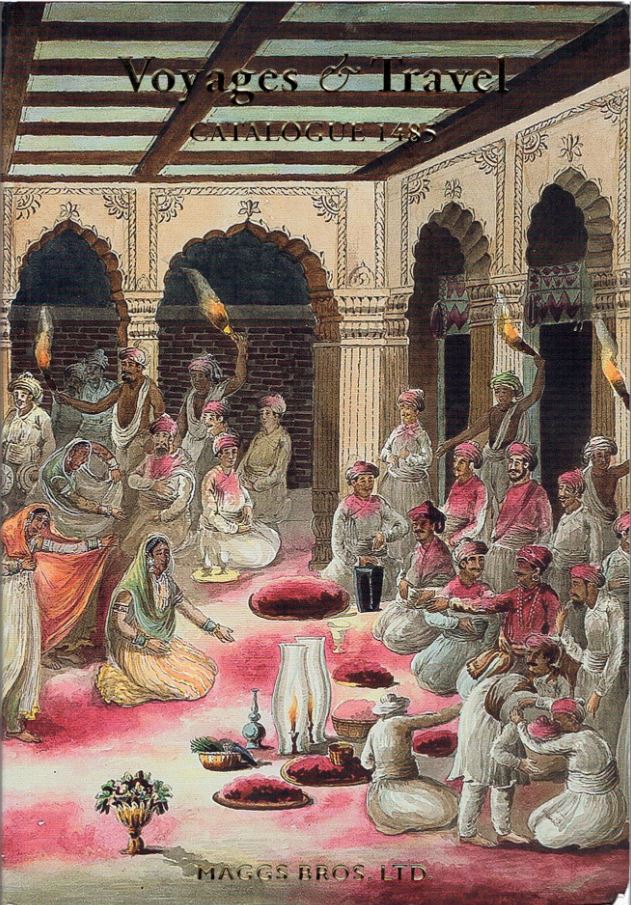 Maggs Bros. Ltd. has published their Catalogue 1485 Voyages & Travel. The catalogue of "fifty or so travel items" (52 to be exact) was issued to celebrate their own move to new premises in London. You can be sure that their move is the shortest among those described in this catalogue. Undoubtedly, it was the easiest too, considering the primitive ships, far off lands, diseases, sometimes restless natives, and other times extreme climatic conditions these travelers endured. The travels are presented in chronological order, ranging from around 1350 to 1922. Naturally, the first account is in manuscript form. The trips described emanated from Europe, but traveled around the globe, as far east as Asia, as far west as the Americas, as far south as Antarctica and north as the Arctic. Have a nice trip! Here we go.

We begin with the first, which is to say the oldest item in the catalogue. It is one of the most famous travels of all. Item 1 consists of two manuscript leaves, circa 1350, from the account of Marco Polo's journey to China. Polo's father and uncle, merchants as was Marco, had already visited China when the three left together in 1269. They returned 24 years later. Other westerners had preceded the Polos to China, but Marco's was the first detailed account of the land by a westerner. The two leaves offered include Polo's description of Tibet. They have some glue residue on the recto of each leaf as they were used as pastedowns in another (unidentified) book. That sounds like a terrible thing to do and yet, had they not been so used, the leaves would not have survived at all. They are written in the Franco-Italic language rather than Latin as most often seen. That is the language in which Polo wrote, indicating it is a very early, and likely most accurate, copy. Polo's original manuscript has been lost. The timing of these leaves, based on expert appraisal, appears to be within a generation of Marco Polo's death. Priced at £200,000 (British pounds, or about $249,629 U.S. dollars).

Marco Polo went east, but Hernan Cortes went west. Less than three decades after Columbus discovered America, Cortes set out to conquer it. Specifically, Cortes, the quintessential Spanish Conquistador, sought to conquer the area he called "New Spain," better known today as Mexico. With an army of about 500 men, he had to conquer an entire empire, plus fend off attacks from his rival, Cuban Governor Velazquez. He succeeded in gaining assistance from some natives unfriendly to the Aztecs, and tore through their territory, capturing the capital city. A great empire quickly fell. Cortes wrote Holy Roman Emperor Charles V describing events in his first letter, now lost. Item 2 is a copy of his surviving Second Letter, a first Latin edition of 1524 (the letter was written in 1520). The Cortes letter is bound together with Peter Martyr's De Rebus... as is usually the case. Item 2. £30,000 (US $37,444).

Henry Morgan is probably the best known pirate ever, which makes this manuscript letter to the Commissioners of His Majesty's Navy all the more amusing and ironic. Morgan's attacks on Spanish shipping made him more of a hero than villain back home in England. In fact, much of his activity was sanctioned by the British government, making him a "privateer" rather than a pirate, though the behavior was similar. Morgan was appointed Lieutenant Governor of Jamaica, and on occasion, such as when this letter was written, he served as Acting Governor. As such, he was called on to deal with... pirates! On July 14, 1681, he writes, "Wee have taken the Sloop of one of Jacob Evertson, a most notorious Pyrate and make use of her to accompany the Norwich in crewsing after the many villainous Pyrates that now infest these coastes." Morgan continues, "I have lately had some Pyrates brought in, whereof one was according to his demerits executed, and one Thoms, a most famous villain, who lately took a Vessell of this island of considerable value, is taken and now under Tryall." Morgan did not enjoy executing pirates and often sought reprieves, perhaps because he had a spark of humanity, or because he could relate to their situation. However, it should be noted that Morgan did not consider himself a pirate but a privateer attacking Spanish shipping on behalf of the British government, which authorized him to do so. Item 8. £40,000 (US $49,926).

Next we have a scarce account of the French and Indian War, one which Howes described as the "best contemporary chronicle of this war": The History of the Late War in North-America and the Islands of the West-Indies, published in 1772. The author was Thomas Mante, who served in the war, though not until its very end and in Cuba. Nonetheless, he evidently had access to many contemporary sources, enabling him to provide detailed accounts of the various actions. Of particular note, he provides a description of Washington's intelligence gathering activities on the frontier in 1753 and his escape from an assassination attempt by his Indian guide. This copy contains all of the 18 maps. Over a century ago in his American bibliography, Sabin wrote, "Copies with all the maps are scarce. It is probable that but few were printed, though the large and beautiful plans and military maps (which gave it so great a value), must have made its production a work of much expense." Item 18. £70,000 (US $87,349).

Here is a personal letter which, like that of Morgan, has a bit of irony. It was written by the noted British Antarctic explorer, Ernest Shackleton, in December of 1909. He notes the dispute between two Americans as to which of them, Robert Peary or Frederick Cook, reached the North Pole first. Today, Cook's claim is dismissed but Peary's is sort of accepted. Writes Shackleton to a Mr. Gwatken, "It may interest you to know that Captain Scott is announcing on Monday that he will lead a new Expedition to the Antarctic next year I am daily in touch with him now. We cannot let America get this South Pole as well." Shackleton and Scott had their issues, but they were united in Britain beating the Americans to the South Pole. And they did. Scott reached it in 1912, before any American. However, it was a pyrrhic victory for Scott, who froze to death on the way back to his ship. And in the ultimate irony, though he beat the Americans, Scott did not achieve the real goal of being first to the South Pole. Norwegian Roald Amundsen beat him there by five weeks. Item 49. £5,000 (US $6,239).