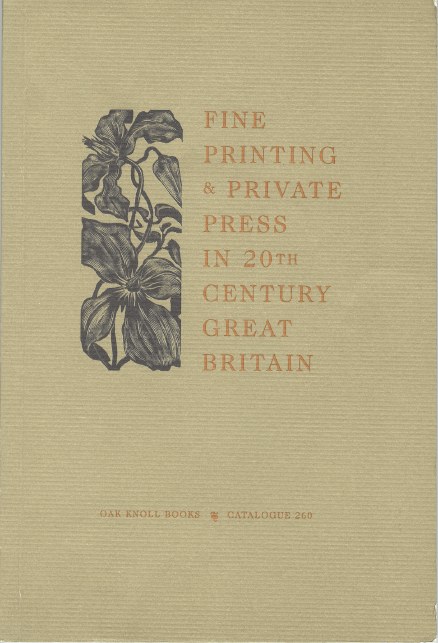 Oak Knoll Books, of New Castle, Delaware, issued two new catalogues this summer. Oak Knoll is a specialist in "books about books." They are one of the premier resources for such items as bibliographies, books about collecting, bookselling, printing and binding, typography, and similar topics. They are also an excellent resource for limited editions, particularly from private and limited run presses, and for books with exceptional bindings, handmade paper, and similar outstanding features. We are not aware of anyone else with such a large inventory of books within this category.

Oak Knoll's catalogue 260 is titled Fine Printing and Private Press in 20th Century Great Britain. A second section within the catalogue is headed, "Books about private press, fine printing, and their creators." This is a surprisingly large collection of British private press works for an American bookseller, with 711 items listed. Normally in these reviews, we select a few examples of the works offered, but mentioning titles misses the point with these works. It's the press, or the printing and binding that is notable more than the particular title. Sadly, this reviewer must admit to a lack of familiarity with British private presses, so it is hard to select which to describe. However, here are a few names whose work even I have heard about: Golden Cockerel Press and Nonesuch Press. There are 29 items offered from Golden Cockerel, and 37 from Nonesuch. However, there are dozens of other, less well-known presses represented, and print runs generally range from a few dozens to a few hundred.

Here is just one example: Beer Will Help Your Shake, the Recollections of a Ninety-Two Year Old Papermaker. Shaking has to do with aligning fibers in the paper, but one suspects the old gentleman was just looking for an excuse to have a drink on the job. This 1990 Alembic Press item records an interview with Harry Glanville, a retired papermaker, conducted by Peter Thomas. It is unlikely you will find anything else written about Glanville's career, and you won't find many copies of this one either, as only 114 were printed. Priced at $125.

The second catalogue, number 261, is not for antiquarian collectors. Its title is Private Press and Fine Printing - 2000 to 2005. This catalogue offers works from both British and American private presses, adding names such as Bird and Bull to the list. Another 144 items are included, all published within the past five years.