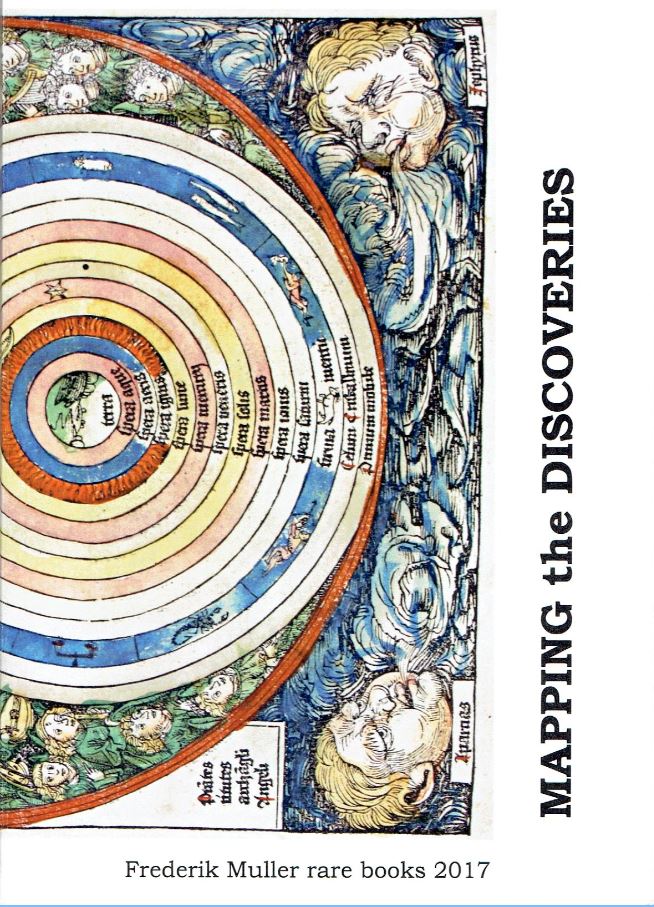 Frederik Muller Rare Books has released a catalogue titled Mapping the Discoveries. It contains just ten items, all maps or atlases. That explains the "mapping" part of the title. The "discovery" part refers to these all being early maps and atlases, from the Age of Discovery. You might get lost if you tried following one of these maps, as they are mostly based on very limited knowledge of the world, generated by early explorers with the tools to only get general pictures of the lands they visited. Sometimes, these travelers had to rely on the words of others, or even their own imaginations. Still, these maps are fascinating today as they give us a look at what our ancestors thought was out there centuries ago, just as their explorations were beginning. Here are a few of these items.

We begin with what is sort of an atlas, though the more accurate term would be portolan. Portolans were sea charts used by navigators, showing directions, distances, harbors and other information essential to navigation. They precede printing, though they became even more important during the age of printing when European sailors explored beyond the limited confines of the Mediterranean, northwest Africa, and Europe, to which they had previously been contained. Item 2 is a specific type of portolan, one known as an "isolario." Isolari were portolan charts of the Aegean Sea, "isolari" referring to the many islands found there, including Cyprus, Rhodes, and many smaller ones. It was a dangerous place to navigate with its rocks and shallow waters if you did not have a chart. This one was produced sometime between 1477-1485 by the Venetian mapmaker known as Bartolomeo dalli Sonetti. His isolario includes 49 charts, showing harbors and obstacles in the sea, along with cities, notable structures, forests and various features on land. Some have been added in manuscript, and this is one of the rare dalli Sonetti isolari to feature contemporary color. Dalli Sonetti's atlas is particularly entertaining as each island has a textual description which is written in verse. He was a mapmaker and poet. Exactly who this Bartolomeo was is unknown, though there are theories. Della Sonetti is not a last name but means "the sonnets," referring to Bartolomeo's poetic skills. Priced at $240,000.

The oldest surviving globe was produced by Martin Behaim of Nuremberg, dated 1492. Obviously, Behaim would not have known of Columbus' discovery of a new world, but he did know that Dias had been able to sail around the southern tip of Africa. Behaim was a merchant who traveled to Lisbon for trade. This was at the dawn of the Age of Discovery and he was intrigued by what was starting to be learned. He participated in a journey to western Africa himself before returning to Nuremberg, where he created his globe. Knowing about Dias' voyage, Behaim was able to show all of Africa as a continent, rather than cutting off its southern half. He had enough knowledge to display Asia reasonably, and he knew of Japan. However, being pre-Columbus, there is no America. Between the Canary Islands and Japan there is only the mythical island of Saint Brendan. In 1730, Gabriel Doppelmayer, also of Nuremberg, created the first map of the world based on Behaim's globe. Of course, it has always been difficult to portray a three-dimensional world on a two-dimension map. Doppelmayer has done it by creating a double hemisphere map. The round hemispheres are surrounded by explanatory text and a portrait of Behaim in Doppelmayer's rectangular frame. The map is called Geographische Vorstellung eines Globi... Item 4. $3,500.

This next item is not an atlas or a map, but belongs here because of its map. Item 5 is Margarita philosophica nova... by Gregor Reisch. This is the May 31, 1512 edition of a book first published in 1503. It was an encyclopedia, called by some the first modern printed encyclopedia. Subjects include Latin grammar, dialectic, rhetoric, arithmetic, music, geometry, astronomy, physics, natural history, physiology, psychology and ethics. Most of the sections are preceded by full-page woodcuts representing the field. This copy includes the folding map, usually missing. It shows Europe, Asia up through India, and the northern half only of Africa. It also displays the "dragon's tail," a connecting strip of land that runs from east of India south through the Indian Ocean, then turns west and connects to Africa. It turns the Indian Ocean into a great inland sea. However, Reisch evidently knew this aspect of the older map was incorrect as the text states (translated): "this is not land but sea wherein a multitude of islands that were unknown to Ptolemy." $48,000.

The first map to depict the New World was published by Martin Waldseemuller in 1507. This map is doubly important since it was the first map to call the new land "America." In 1513, Waldseemuller published an atlas with his world map again displaying America, but this time he called it simply "Terra Incognita," perhaps because by this time he realized it was Columbus, not Amerigo, who discovered the New World. In 1522, Laurent Fries republished what was essentially Waldseemuller's map, except in a reduced size and with a few small changes. In the Fries version, America, which is essentially South America, is shown a little more clearly. It has a definitive southern coast and a western side. Southern and western borders are not visible in Waldseemuller's map which only displays the continent's northeast corner. In this map, Fries has also restored the name "America" to the land. Item 6. $6,000.