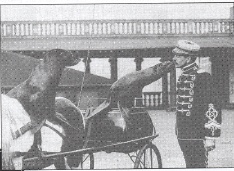 
Item 208 is a large scrapbook kept by inventor William E. Nickerson. Nickerson's name is not well remembered, because the company he was instrumental in forming bears the name of his partner, King Gillette. Gillette had come up with the concept for a thin, disposal razor blade, but the technology was not available for sharpening such a narrow piece of steel. That was where the inventor Nickerson came in. He developed the process for holding the thin steel rigid so that it could be sharpened into a blade. This collection of Nickerson materials includes several patents of his, including an earlier one for manufacturing circular saws. Think of them as giant razors. $1,000.

Looking for some exciting reading? How about the Speeches and Addresses of William McKinley, Mr. Excitement himself? Okay, McKinley was never known for spellbinding delivery, like his opponent, William Jennings Bryan, but he creamed Bryan in two presidential elections. And item 164 is a special copy of McKinley's speeches, as it comes with the President's signed inscription, dated May 24, 1901. Three and one-half months later, he was assassinated. $250.

Item 195 is a most interesting "autobiography," that of Dr. Horace Ackley. Its title is, A Narrative of the Experience of Horace Abraham Ackley, M.D., late of Cleveland, Ohio. Since His Entrance into Spirit-Life. You may wonder how Dr. Ackley wrote this after he entered the spirit-life. I, for one, am very suspicious of autobiographies which are written after the subject has died. The explanation of this oddity is in the subtitle, Received through the Mediumship of Samuel H. Paist. Evidently, Dr. Ackley contacted Paist and requested that the latter publish his experiences as a dead man. At least that was how Mr. Paist explained it. For those interested in what life after death is like, this would seem to be a good resource. However, since the book was published in 1861, I cannot vouch that the afterlife is still the same today. $125.

It may not have been the greatest show on earth, but Professor Webster and His Performing Sea Lions were big enough to play Madison Square Garden, Atlantic City's Million Dollar Pier, and John Robinson's Circus at the turn of the century. Item 75 is four photographs of the good professor and his beached sea lions, including one with a lion giving him a wet kiss on Atlantic City's pier. $225.