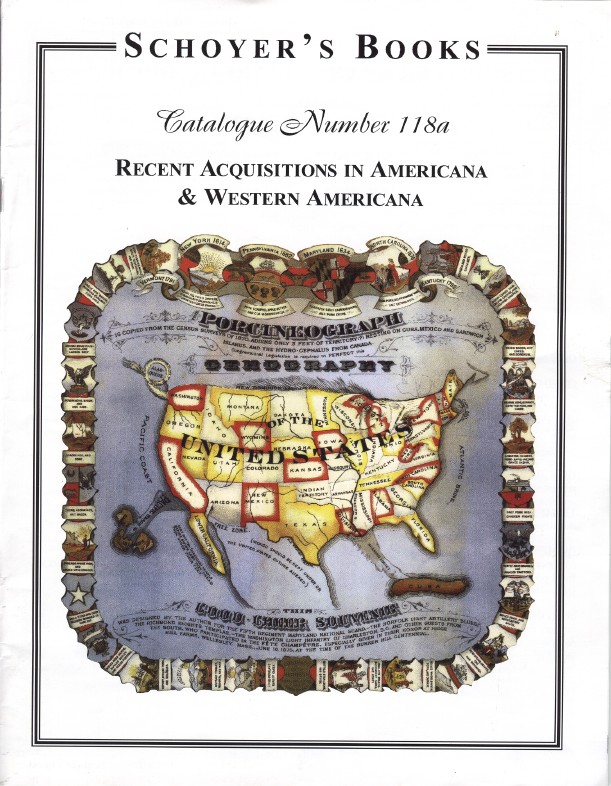 Schoyer's Books of Berkeley, California, recently issued two new catalogues. This month we'll look at the first, catalogue 118a, Recent Acquisitions in Americana & Western Americana. This an interesting collection filled with obscurities from across the country, including many fascinating travel manuscripts which give a glimpse of America in another time. For those who think Schoyer's Berkeley location is a limiting factor, it is not. I grew up in a small town 3,000 miles away, and yet I found several items pertaining to the county in which I was born, or a small city a few miles away. This catalogue comes with a broad reach.

Here is an example of an unusual travel manuscript. In 1935, Esther Smith, a 23-year-old school teacher from Sebring, Ohio, and a group of women took a cross-country bus tour of America. Ms. Smith kept a journal of their travels, while picking up all kinds of brochures, postcards, and taking 76 photographs. She picked up pamphlets from a pottery maker in Colorado Springs, a tourist guide from Spokane, a west coast vacation guide published by Richfield Oil (now the "R" in "Arco"), a report on the climate in Victoria, B.C., guides from Yosemite and Rainier, a Fred Harvey Guide and something on Hopi snake dances. In her journal, she recounts their adventures, including seeing idle men standing around town in Tennessee. Remember, this was the height of the Depression. In a stereotype enforcing comment about going to breakfast in that border state, Ms. Smith says, "we had all we could do to get in a restaurant without tripping over the pigs and hogs that walked all over creation." Item 18. The collection is priced at $500.

A much earlier and different travel narrative was published in London by Rev. William Bingley in 1821. It was called Travels in North America, from modern writers. It was aimed at "young persons," as Bingley hoped to interest British children in American geography. It consists of daily instructions, with the material coming from the then still recent works of Lewis and Clark, Pike, Mackenzie and many others. Item 16. $400.

For those looking to retrace one of America's most historic routes, item 91 is one of those Depression-era WPA (Works Progress Administration) publications entitled, The Oregon Trail, US 30: The Missouri River to the Pacific Ocean. The route runs from Independence, Missouri, to Astoria, Oregon, and the "30" was US Route 30, which roughly paralleled many stretches of the old trail (much of Route 30 has since been subsumed by Interstates 80 and 84). This book includes descriptions of many of the towns along the way, and side roads that can be traveled. Just as in its day the book was intended to help travelers discover an earlier America, it can now help you find western America as it existed during the Depression. $125.