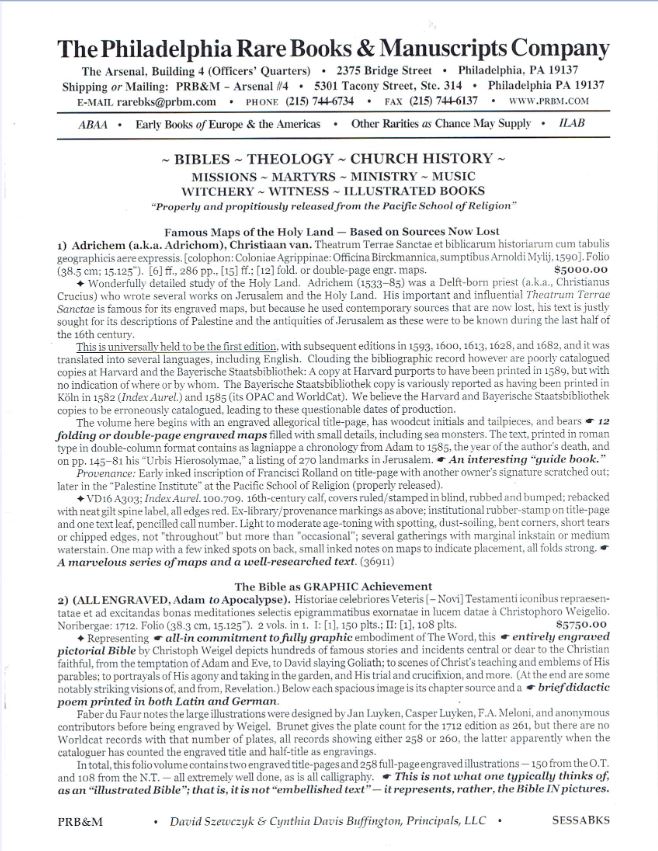 The Philadelphia Rare Books & Manuscripts Company has issued a most devout catalogue entitled Bibles – Theology – Church History – Missions – Martyrs – Ministry – Music – Witchery – Witness – Illustrated Books. These are all still current topics in religion, except witchery, and hopefully not too many martyrs anymore. These books came from the collection of the Pacific School of Religion, all "properly released," PRBM assures us. The Pacific School of Religion was founded 150 years ago to offer theological training for various participating Protestant denominations. It is located in Berkeley, California. Here are a few selections of these mostly quite old books.

We will begin with what PRBM calls "one of the foundational works in any collection of Bibles and Testaments." This one is commonly known as the "Douai Old Testament" for the place in France where it was published, though the official title is The Holie Bible faithfully translated into English, out of the authentical Latin. This is the first Catholic Old Testament in English. With Protestantism having taken control of England, English Catholics needed their own Bible in the language they understood. An English New Testament was printed in 1582, but it took almost 30 years before the Old was published. It was ready much earlier, but funds for printing were not. It comes in two volumes, published 1609-1610. This copy has some fascinating adjustments and annotations. Some pages were removed from Genesis, but the missing pages from a different copy were tipped in. On the front pastedown there is an inscription "Cloister of Nazareth," along with the explanation, "The holy Bible some pages cut out, (for modesty's sake) thro' ignorance yt. each word hear in is sacred, & too sacred for such, as finds thmselves unfit to read it." Evidently the sisters of the Cloister of Nazareth (we are guessing it's the European convent) weren't so prudish that they could not bear to read Genesis. There is also a signed inscription dated 1810 from Rev. Folkins of Derbyshire. The good Reverend had a sense of humor the sisters, and maybe every other woman, might not appreciate. It reads:

"Men have many faults

Women have but two

Nothing wright they say

Nothing good they doo"

Since we had one for the Catholics, here is one for the Protestants. This is not a fair balance. Rather than a Protestant Bible, this is a Protestant attack on the Catholic Church. Item 27 is Acts and monuments of matters most special and memorable, happening in the church, with a universal historie of the same...with the bloody times, horrible troubles, and great persecutions against the true martyrs of Christ... The title is longer but you get the drift. The author was John Foxe, and the book is more commonly known as Foxe's Book of Martyrs. To be fair, Foxe lived in 16th century England, and the battles between Catholics and Protestants in that era spilled much blood on both sides, as each jockeyed for political power. While still in school, Foxe became disillusioned with the Catholic Church. This was the time of the Reformation, so the Church was under much criticism. Meanwhile, King Henry VIII, wishing to be rid of his first wife, but unable to obtain an annulment, led England away from the Catholic Church. This must have influenced Foxe's thought, and the belief that the Church was standing in the way of reaching God, rather than facilitating the connection. All of this became much worse when Queen Mary succeeded the sickly teenage King Edward VI, a Protestant King who had succeeded his father Henry. Mary was Catholic, daughter of Henry's Catholic first wife. And, Mary did not earn the nickname "Bloody Mary" for nothing. She created her share of martyrs for Foxe to write about in his book. However, Foxe, now in exile in Europe, already had a collection of earlier martyrs to the Catholic Church, with Mary providing the coup de grace. The first edition was published in 1563. The edition here offered is from 1641, three large folio volumes printed for the Company of Stationers. It is the first edition to include Samuel Foxe's biography of his father. $7,500.

This next book represents the beginning of Christian archaeology. Antonio Bosio was a late 16th, early 17th century Italian discoverer. However, he did his discoveries under, rather than above ground. Ancient subterranean burial grounds were accidentally discovered in Rome when Bosio was a young man. He decided to find more and explore them. He devoted his life to searching, and when he found them, climbing in and recording what he saw. He used early Christian texts to help locate long forgotten entrances and what to look for inside. He wrote about what he found in the catacombs, though his discoveries remained mostly unknown during his lifetime. The first edition of his account was not published until 1632, three years after he died. Item 22 is a 1671 edition of Roma subterranea novissima... edited by Paolo Aringhi. PRBM cautions that Aringhi added anti-Semitic and anti-Protestant commentary that was not present in Bosio's original. $1,250.

This review would not be complete without something from the category of witchery. This may be the most important such work: A Blow at Modern Sadducism in some Philosophical Confederations about Witchcraft. This is Joseph Glanvill's "proof" of the existence of witches. This one is described as a corrected and enlarged fourth edition, published in 1668. It is actually a much revised version of a book that appeared two years before, and would appear after, under different titles. Glanvill uses both empirical and philosophical arguments to establish the reality of witches. His notable empirical evidence came from the home of John Mompesson of Tedworth. He won a lawsuit against a drummer who supposedly retaliated by having spirits visit the house with drumming noises. Glanvill spent a night at the house and said he heard something too. Others suspect there was fraud, or Mompesson's children playing a prank since the noise often came from their rooms. A philosophical proof, and perhaps the one that most troubled the likes of American Puritan Cotton Mather, the influential clergymen who more or less looked the other way during the Salem witch trials, went like this. If witches are real, then evidently other biblical figures, such as angels and God himself, must be real. If witches are not real, then we might doubt the existence of those other beings as well. Item 30. $1,450.