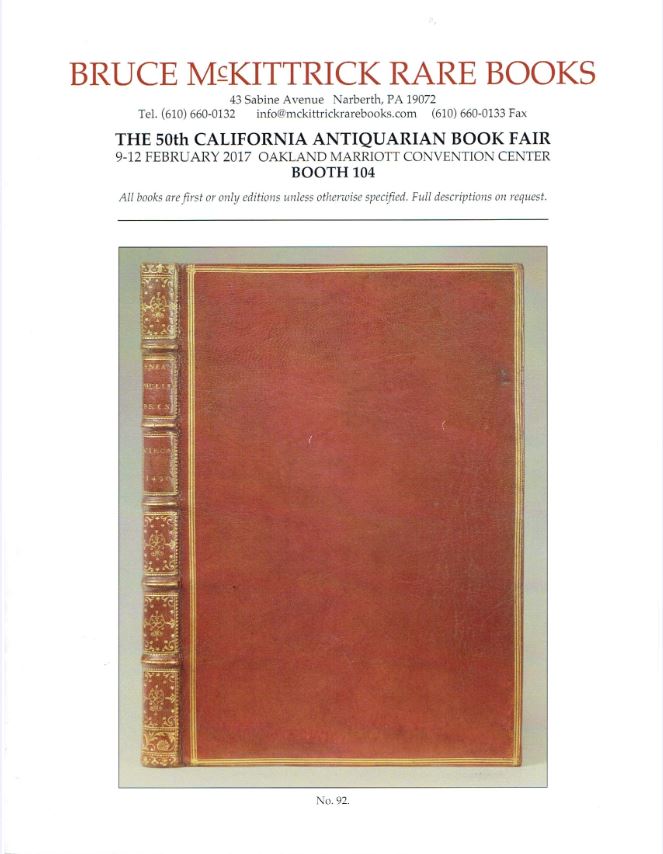 Bruce McKittrick Rare Books issued a catalogue for The 50th California Antiquarian Book Fair. This is not their typical catalogue. Descriptions are at best brief, which is understandable for fairgoers as they can see the book and ask questions in person. I can't, and since most of their books are very old, they are in a variety of languages, most of which I don't understand. This is a challenge. Here are the headings under which they are listed, and then I'll try to describe a few samples: 15ers (15th century or incunabula); Annotated Books; Art, Architecture & Festivals; Bibliography, the Book Trade & Collecting; Bindings & Colored Silk & Paper; Children's Books & Education; Economics & Law; Greek & Latin Classics; Guidebooks & Travel; Music & Theater; Politics & Warfare; Religion; Science, Medicine & Technology; and last but certainly not least, Women.

We begin with one of the items of incunabula, a well-known book published in many editions. This edition of St. Augustine's De Civitate Dei was published in Basle in 1479. McKittrick notes it contains commentary by two Englishmen. By 1479 it was free for anyone to print since its Roman copyrights, if there were such things, had long expired. St. Augustine wrote it over a millennium earlier, 413-427. St. Augustine lived at a time when the Roman Empire was decaying and heading for collapse. In this book, whose title translates to "the City of God," he contrasts two cities, or communities of people. One behaves poorly, the other follows God. Only one merits salvation. We will let you guess which one. Item 1. Priced at $22,000.

One more piece of incunabula – item 2 is De variis vite humane incommodis elegia by Robert Gaguin, published in 1498. This is an elegy for King Charles VII of France. It is a bit on the late side as Charles died in 1461 after a 40-year rule. Perhaps it needed to wait until Charles' son and successor, Louis XI, died, as the two did not get along. This book has spaces between lines for student annotations so it must have been intended for study. Charles VII was a mostly successful king. He inherited the throne when France only controlled a portion of its own territory. The English, with their Burgundy allies, occupied the north, including Paris. Charles, with the aid of a more famous ally, Joan of Arc, was eventually able to drive the English from their land. $6,800.

Speaking of French kings, here is a way to learn about some of them. Item 11 is a print, described by McKittrick as a "monumental print" (I believe this means very, very large). It is La Genealogie...des Roys de France, published in Paris in 1595. It is hand-colored with images and descriptions of many kings. Presumably, the aforementioned Charles and his son are among them as they reigned prior to 1595. You won't have to worry about your friends also having one of these if you make a purchase. This is the only known copy. $45,000.

Here is a book about a woman's estate that was printed by a woman, and it isn't even listed under the category of Women. Instead, it's with Guidebooks & Travel. That is appropriate too, as it is a Description du Chateau d'Anet, by Guillaume Le Marquant, published in 1776. This was the estate to which Diane de Poitiers retired in 1559, and lived until her death in 1566. Miss du Poitiers married the aforementioned King Charles VII's grandson, almost 40 years her senior. It gave her a role in the King's court. It was a secondary role during the long reign of Francis I, but she became a favorite of Prince Henry. He was 14 years old when they met, she a 35 year old widow, her aged husband having died. They got along just fine anyway, and it is believed they had a romantic as well as intellectual relationship. Henry would marry Catherine de Medici, with Diane's approval, and she treated Catherine well. Catherine was likely jealous of the relationship. In 1547, King Francis died, and for the next 12 years, Henry, now King Henry II, reigned. Diane held enormous influence, more at court than did his wife, Henry relying on her for much advice. This lasted until 1559 when Henry died. At that point, Catherine had already had enough with her, so Diane was sent off to the lovely Chateau d'Anet to live out the rest of her life. Item 57. $5,800.

Here is a book for another woman, but one with not so sterling a reputation. Her name, Lucrezia Borgia, still elicits images of sex and violence. In the days before you could virtually witness such behavior on television, rumors about fair Lucrezia provided the populace with prurient entertainment. She had three husbands, one of whom was murdered, a couple of annulments, ten children (possibly more) and countless lovers. It wasn't her fault. Being a Borgia, she was born into it. One wouldn't expect improper behavior from a woman whose father was a Pope, but the Borgias were a special family, and Alexander VI a very a special Pope. Besides which, how many children can say their father was a pope anyway? Lucrezia was said to be a very beautiful woman, and considering all the suitors, that seems likely to be true. However, her marriages were not based on her beauty. They were marriages of convenience, political arrangements engineered by her father and brother. That is why they ended – they were no longer useful to the Borgia family. Her last marriage lasted, and produced eight of her children, but she still found time for several quite passionate affairs on the side. Unfortunately, ten children proved one too many for Lucrezia. She died shortly after childbirth to number ten. Now we come to this next work, Enneas Muliebris (Nine Books on Women), by Lodovico Bonaccioli, and with the preceding history, you can see why it was such a valuable book. Bonaccioli was Lucrezia's physician, and he composed this book in 1502-1503. It covers obstetrics and gynecology. Considering her active lifestyle, she required paying particular attention to both. Item 92. $75,000.