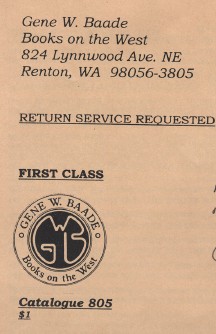 The latest catalogue from Gene W. Baade of Washington State, number 805, has just been published. Baade specializes in "Books on the West," that land of endless vistas, tall mountains, and tall tales. Not even the slickest of eastern city slickers can resist stories of the Old West, and the characters who inhabited this once rough and sparsely populated land. A Gene Baade catalogue will bring you back to these times, with its collection of both renown and obscure western histories.

"Wild Bill" Hickok is one of those old western names most people recognize, though it's doubtful many still remember why. James Butler Hickok was an expert marksman who worked on the right side of the law, though he seemed willing to bend it to suit his needs. He left his family home in Illinois on reaching his majority to work for the stage company in Nebraska. His reputation began when he shot and killed David McCanles and two others who had come to collect payments owed after McCanles sold his pony express station. Hickok was tried for the shooting but acquitted, likely because he was in the employ of the powerful Overland Stage Company. This incident grew into a deed of great courage and skill in later retellings, which while less than accurate, Hickok saw no need to correct. He became a legend. "Wild Bill" would go on to serve as both a local lawman and Federal Marshall, served the Union in the Civil War, and with Custer for a while in the Seventh Cavalry, spent a year as an entertainer with Buffalo Bill's western show, captured a number of outlaws, and became well-known as a gambler. It was an exciting life, though not quite up to the reputation he garnered. However, gambling has been the downfall of many men, and "Wild Bill" was no exception. In 1876, Hickok was playing poker in the gold rush boomtown of Deadwood, South Dakota, his back inexplicably turned to the door. In walked one Jack McCall, a young drifter supposedly seeking revenge for the killing of his brother, but likely trying to make his own reputation. He walked up behind "Bill" and shot him in the back of the head. Hickok died instantly, McCall a few months later at the end of a rope. Now you can read all about this great western character in Edward Knight's 1959 book, Wild Bill Hickok. The Contemporary Portrait of a Civil War Hero, Champion Pistoleer, Deadliest Gunfighter of the Old West. Item 67. Priced at $25.

A westerner that you don't know, but who claimed to know most of those characters you do, "Wild Bill" included, was one Joseph "White Eye" Anderson. Among those "White Eye" claimed to know were Buffalo Bill, Calamity Jane, Deadwood Dick, The James Brothers and Liver-eating Johnson. Supposedly, he accompanied Hickcok on his journey to Deadwood. He describes the older Hickok as having problems with distance eyesight, but still able to see close enough for a draw. Apparently Bill never had to aim; he just drew, fired, and relentlessly hit his target. Anderson also claims that Calamity Jane was one of the parties on the Deadwood trip, but that contrary to certain rumors, there were no romantic links between Jane and "Wild Bill." You can read White Eye's tales, which may or may not be true, in I Buried Hickok. The memoirs of White Eye Anderson. Item 123. $48.50