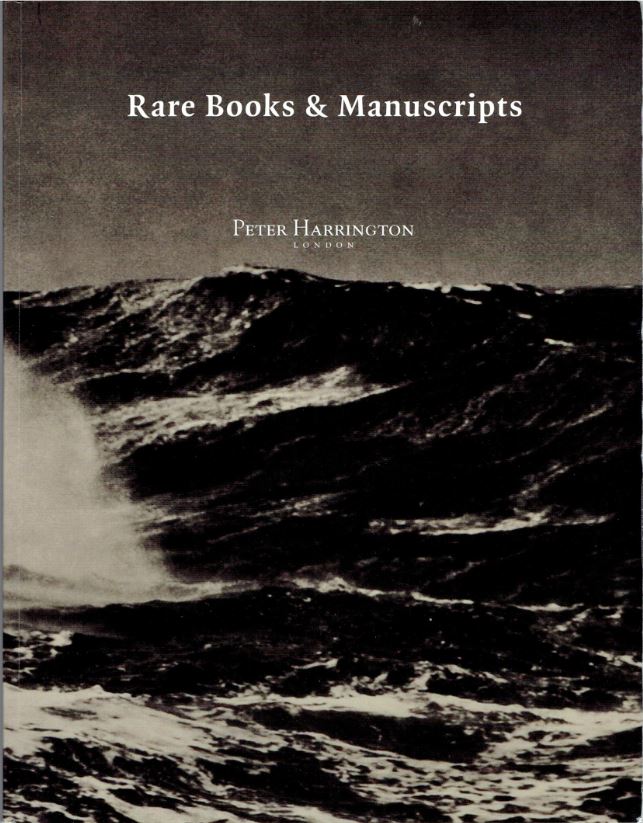 Peter Harrington of London has published a catalogue of Rare Books & Manuscripts. These are important pieces, mostly books this time, though we do find manuscripts from Darwin and Fitzgerald. Additionally, many of the books are inscribed or signed. There are also a couple of collections too large to describe. One contains the polar collection of Antarctic meteorologist Kenn Back, consisting of 52 titles in 61 volumes. Another is a set of 12 deluxe editions of Beatrix Potter stories, The Tale of Peter Rabbit, naturally, being one. Here are a few more items you will find in this new selection.

At first glance, this certainly doesn't look like a special copy of this book: Though the Looking Glass, and What Alice Found There. Sixtieth Thousand. This is an 1893 third edition of Lewis Carroll's (Charles Dodgson) follow-up book, and by the time you get to a sixty thousand copies, they are generally not very special. However, this is one of only four like it, and even that doesn't describe its uniqueness. It is also filled with the author's annotations. Here is the story behind this unusual copy. The tale of Dodgson being upset with the first edition of Alice's Adventures in Wonderland is legendary. He was so displeased with the quality of the printing, he demanded the entire edition be withdrawn. Eventually, the pages were shipped to America to be bound and sold there, where tastes evidently are not so refined. With this third edition of Looking Glass, Dodgson once again was displeased and demanded the edition be withdrawn. Only 60 copies of it went out when Dodgson demanded the rest be destroyed. A later census found only four copies in the original cloth could still be traced, one of which has since been lost. This copy is of particular note because it has Dodgson's annotations, those annotations being his complaints about the printing. He says the paper is too white, 26 pictures were overprinted, and there are 34 comments within the pages pointing out quality problems. Item 30. Priced at £55,000 (British pounds, or approximately $68,784 U.S. dollars).

This is a sixth, though Harrington notes earliest practicably obtainable edition, of Sir Thomas Malory's The Most Ancient and Famous History of the Renowned Prince Arthur King of Britaine... This edition was printed in 1634, the first dating back to Caxton in 1485. King Arthur may or may not have existed in the fifth or sixth century. According to legend, he fought off the Saxons and others and united what would amount to a greater Britain. His story was retold many times, Malory's being one of the most famous. The book was originally titled Morte Darthur (Death of Arthur), and I never understood why, since it is mostly about his life. Harrington explains, Caxton mistakenly took the heading of the last chapter to be the title of the entire book, with the last chapter covering Arthur's death. Item 8. Priced at £37,500 (British pounds, or about $46,705 U.S. dollars).

Here is a truly amazing book, one that required great effort by its owner rather than its author. The title is Crusade in Europe, by Dwight D. Eisenhower, published in 1948. Eisenhower commanded allied forces during the Second World War, this being his account. Offered is a copy of the deluxe issue, number 555 of 1,426. The deluxe editions included a bound in leaf of Eisenhower's D-Day speech to his troops, signed by the General, later President. Now we get to the good part. This copy was owned by John Wesley Pape, who decided he would like to be able to give it to his son signed by as many of the major Allied participants in the war as he could get. The would-be signers, naturally enough, were scattered around the world, and Pape could hardly visit them. So, what he did was send his book off to all of the signers. In each case he requested their signatures, told them where he preferred that they sign, and included a shipping box to return it. Surprisingly, they all complied. In some cases, they provided Pape with advice on how to reach others on his list. The book traveled some 40 times, across the country and across the Atlantic. The signers are a list of who's who in World War II: Eisenhower, Truman, Churchill, Anthony Eden, Montgomery, MacArthur, Bradley, Byrnes, Marshall, Doolittle, Cordell Hull, Mark Clark, and many more, even Mamie Eisenhower. Item 54. £150,000 (US $187,146).

Next is the Fitzgerald manuscript, two manuscripts actually. The title in the first draft is I Never Got Over, but in the second draft it was changed to I Didn't Get Over. The second was the title used when this short story was published in Esquire magazine a few months later, the October 1936 issue. The story is about a reunion of "War Babies," who ask one their members what ever happened to another. He tells the sad tale of his ending up dying in a military prison. The story ends with a surprising revelation. We won't spoil the plot. These manuscripts came from the collection of James B. Hurley. A recent college graduate in 1936, Hurley was hired by Fitzgerald to type some of his manuscripts. Hurley worked for Fitzgerald for nine months, at the end of which the latter gave him some inscribed books and the manuscripts of two of his short stories. Item 50. £95,000 (US $118,724).

This must be America's most famous illustrated book. John James Audubon was an ornithologist who set out to capture the likenesses of America's birds in the 1820's. What he created was not just a scientifically informative treatise, but a work of art. The double elephant folio first edition took eleven years to complete, and the cost of production was such that its price had to be out of reach of most who wanted a copy. The result is that Audubon decided to shrink the size of his drawings down to fit in octavo volumes, which he published from 1840-1844. He also added several newly discovered species, and illustrated some not illustrated before. With the newly revised format, Audubon was able to sell his book at an affordable price, resulting in brisk sales, and the healthy profit he was unable to achieve the first time around. Today, the price of even the octavo edition of The Birds of America may be out of reach of the average collector, but it is still a lot more affordable than a folio, which has sold for as much as $11.5 million. Item 20. £52,500 (US $65,629).