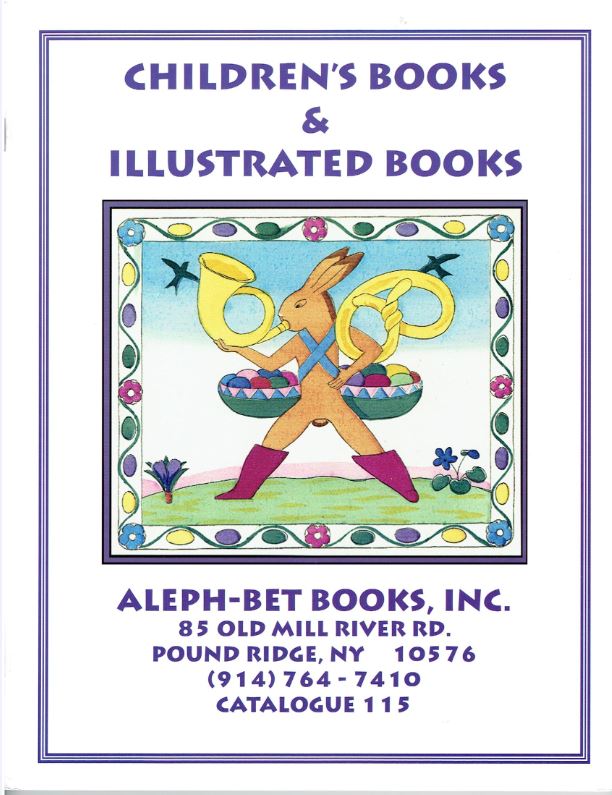 Aleph-Bet Books has released their Catalogue 115 of Children's Books & Illustrated Books. Aleph-Bet has a new selection of 500 books, or items related to books, each with a color image along with the description. If you are a collector of children's books, it is totally impossible not to find selections you like. Here are just a few examples of what can be found.

We begin with one of those "true firsts," the first appearance of a classic children's story that precedes what is generally thought of as the first edition. Long before Disney reinvented him, Pinocchio was a somewhat darker character when created by Carlo Collodi. Collodi had previously written for adults when he turned his pen toward children's books in the late 1870's. In 1881, the first children's magazine in Italy began to be published. The name was Giornale Per I Bambini, and Collodi was asked to contribute an ongoing story. He did, which at the time carried the title La Storia di un Burattino. It was enthusiastically received as, though containing a moral, it was more built around fantasy than moralisms. It continued intermittently for the next two years. The title changed the following year to the more familiar Le Avventure di Pinocchio. The first edition in book form was published in 1883, but this magazine serial is the true first. Item 112 is a set of the magazine from 1881-1883 containing all of the original Pinocchio adventures. Priced at $25,000.

Here is a book we wouldn't expect to see offered to children today. It is an alphabet book, circa 1900. In those days, it was common for companies to create ABC books for children, even when the target of the sales pitch was their parents. Item 1 is Animal Alphabet, created by Wright's Indian Vegetable Co. Also in those days, it was common for creators of phony medicines to pretend they were the creations of some wise old Indian medicine man. Each of the letters is accompanied by a rhyme related to some ailment that can be cured by one of Wright's medicines. There is Peery's Dead Shot Vermifuge that will kill worms, the type that live inside you. Here is a vocabulary lesson - a "vermifuge" is an anthelmintic medicine. What is an "anthelmintic" medicine, you might ask? An anthelmintic is something that kills parasitic worms. Moving on from today's vocabulary lesson is an item that you definitely wouldn't promote for children today – McMunn's Elixer of Opium. It cured sleeplessness and nervous irritation among other ailments. Undoubtedly. This stuff actually secured a U.S. Patent, #70,171, in 1908, and Wright's was at one time a member of the American Medical Association. $275.

Here is a piece of artwork you would love to hang on your wall. It is an original watercolor drawing of Peter Rabbit by Beatrix Potter. Peter needs no introduction, but this drawing does. Peter had long since grown up and had hundreds of children of his own when it was drawn, circa 1925. Potter was friendly with Anne Carroll Moore, head of the children's library at the New York Public Library. After the First World War, she went to Europe, helping to replenish children's libraries devastated by the war. At one point, she met Potter, which began a friendship that continued the rest of their lives. In 1925, Moore wrote and published a children's book. She sent a copy to Potter. Potter wrote back a letter of appreciation, but noted she had no new book of her own to send in return. So, instead, she sent this original watercolor of Peter, gift flowers in hand, looking as youthful as ever. Item 376. $50,000.

"Oh. Oh. Oh. Oh, see. Oh, see Jane. Funny, funny Jane." Want more? There's lots more where this came from in Our Big Book. This is a giant size folio edition of Dick and Jane, because you can never get enough of Dick and Jane. Or Sally, or Spot, or Puff. Actually, Sally is just referred to as "Baby" here. This undated book is circa 1940, which presumably was shortly after she was born. This large edition was meant for teachers to display in the classroom, so the children could never escape their ubiquitous presence. Generations of kids learned to read from these two cliché youngsters, and a few ended up loving to read anyway. Item 137. $1,850.

Next is sort of a book. It looks like a book, but it opens into a panorama. Its title is Coronation Procession Panorama. The panorama displays a royal procession. On each page, there is a slot where the reader can insert a figure into the parade. It was published in 1952, and the Queen being honored is Queen Elizabeth. Some things never change. Item 342. $775.

Sometimes an author can get so closely associated with one book that we can forget they ever wrote anything else. Robert McCloskey wrote several award-winning children's books, yet he will forever be intimately tied to a particular one – Make Way for Ducklings. Here is one of his others: Blueberries for Sal, published in 1948. This is a first printing of the first edition of what Aleph-Bet tells us is his hardest book to find. Unlike Ducklings, which takes place in Boston, Blueberries is set down east, in Maine. It is a tale where Sal and her mother go picking blueberries. Their story is juxtaposed with that of a bear and her cub who do the same. Item 275. $4,750.