Bibliography and Reference from Forest Books of the U.K. 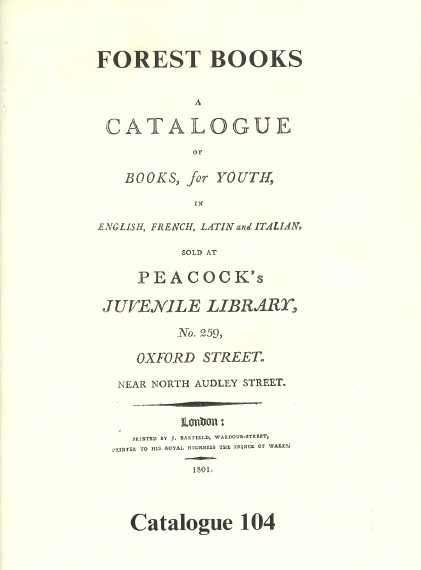 Bibliography and Reference from Forest Books of the U.K.

This month we review our first catalogue from the British bookseller Forest Books. This is their catalogue number 104, Bibliography, Bookbinding, and Reference. It is an excellent assortment of titles pertaining to the book arts, and includes an unusually large number of early book auction catalogues, many from the early 19th century. Most of the major collections that went on the block in those days are virtually impossible to duplicate today, so much of the material is now firmly ensconced in institutional collections. The material in this catalogue cannot help but interest the serious book collector. Here are a few samples.

There has probably never been a book collector more fascinating or eccentric than Sir Thomas Phillipps. Phillipps lived in mid-19th century England, and he set out, quite literally, to collect a copy of everything that had ever been printed. He undoubtedly came as close as anyone, at least among private collectors, to accomplishing this goal. Phillipps amassed some 100,000 books and 60,000 manuscripts. He filled every room in his house, having to maneuver through narrow passageways to get around. The obsession put Phillipps in debt, almost bankruptcy, and yet somehow he managed to raise a family in this mess. Amazingly enough, they stood by him. The most thorough work on this strange man and his astounding collection was produced by A.N.L. Munby from 1951-1960, the five-volume Phillipps Studies. It covers the collection, Phillipps personal life, and, finally, the dispersal of his collection. Item 322. Priced at L295 (British pounds, or U.S. equivalent of $513).

Phillipps also had some works privately printed under the name of his Middle Hill Press. Here is one: The Cambridgeshire Visitation, by Henry St. George. This was a 200-year-old genealogy when Phillipps reprinted it in 1840. A rare book, it includes a preface from Phillipps complaining of the high cost of printing and the inconsistent taste of the public. Item 310. L345 (US $600).

After Phillipps died, his massive collection would be put up for auction. It would take almost a century from the first auction in 1886 until the last in 1981, to finally track down and sell all that Phillipps owned. Here is the catalogue from the first auction, Catalogue of the First Portion of the Famous Library of Sir Thomas Phillipps...Including a Complete Set of the Publications Privately Printed by Him at Middle-Hill... There were 3,346 lots offered by the forerunner of Sotheby's, and prices have been written in. Item 366. L95 (US $165).

A most interesting catalogue is the Catalogue of Books in the Library of the House of Commons. In 1830, the legislative body ordered that a catalogue of its collection, begun in 1818, be printed. What makes this catalogue notable is that just four years later, a fire swept through this library and much of what it contained was lost. Item 269. L165 (US $287).