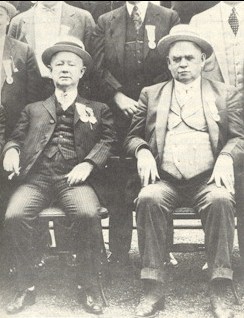 
Item 49 is John D. Weaver's Carnation: The First 75 Years 1899-1974. This is a thorough history of the company that brought us evaporated milk. It is a piece that proves that items that excite some collectors might appear totally uninteresting to others. $23.50. Or how about Autobiography of Perry Whiting: Pioneer Building Material Merchant of Los Angeles? Mr. Whiting was undoubtedly a fascinating person, but he certainly was not able to choose an exciting title for his book. Just plain "Pioneer" would have been more enticing than "Pioneer Building Material Merchant." Oh well. This copy is inscribed by the author and is still only $40. Item 151.

Now here is a title that can bring tears to your eyes: The History of Dentistry in Missouri. Please, don't show me. This gem was published in 1938, which I believe precedes the invention of novocaine. It includes the dentists' code of ethics, which I think at the time required no one leave the office without first experiencing excruciating pain. Perhaps this book can help you relive those "good old days." Item 325. $45.

Here's a book for those who like to track down ghost towns. The book is Ghost Towns of the West, by William Carter. The book was published in 1971, which should be very helpful for finding these towns, as deterioration over the past 34 years has likely been substantial for many. It includes both photographs of the towns from when they were inhabited, as well as current ones as of 1971. Maps and directions are also provided so you can explore. Item 20. $30.

Here is a strange title that may intrigue or repulse you: Lords of the Levee: The Story of Bathhouse John and Hinky Dink. Whoever or whatever you may think this book is about, it turns out that these two were Chicago aldermen from the late 19th century almost to the middle of the 20th. They were old-time political bosses whose behavior would be considered corrupt today. It wasn't even considered that savory in the era of big city political machines. The two were also noted for throwing an annual ball that was a spectacle of debauchery, until forced to close it down after 1908's rendition. Nonetheless, the two were re-elected in the First Ward (the Levee) repeatedly for many years, one or the other or both holding office from 1892, when Bathhouse John Coughlin was first elected, until the survivor, Hinky Dink Kenna, died in 1946. Item 94 was published in 1943, while Kenna (though not Coughlin) was still alive. $26.

Item 404 is a history of pioneer life around Roswell, New Mexico. This goes back to the days before aliens discovered Roswell. Today, everything in Roswell seems to have an alien theme, though the only aliens around there are the ones who recently crossed the border. The book is Reminiscences of Roswell Pioneers, by James Shinkle. $55.