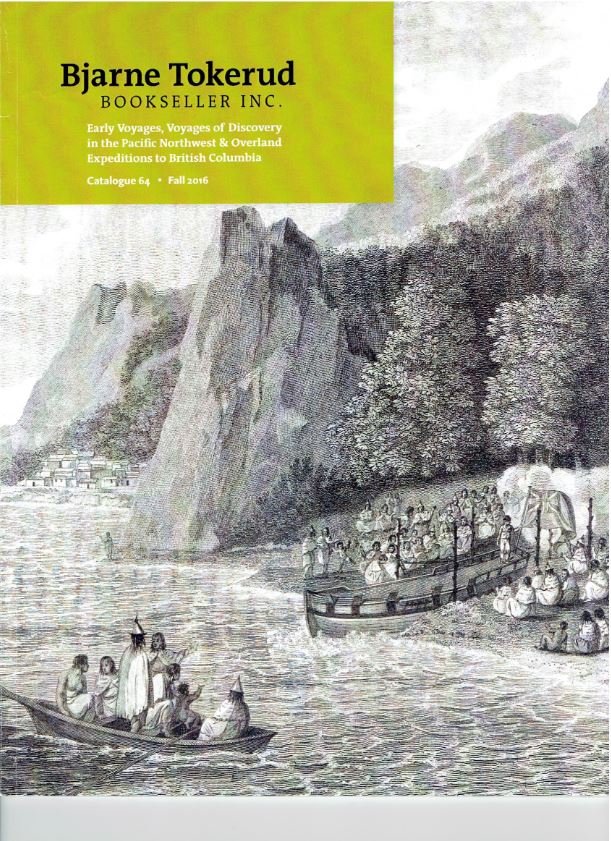 Voyages and the Pacific Northwest.

Bjarne Tokerud Bookseller has issued a catalogue of Early Voyages, Voyages of Discovery in the Pacific Northwest & Overland Expeditions to British Columbia. Most of this material pertains to adventures north of the U. S. border, or at least the border of the lower 48, as many items here involve Alaska. Tokerud is located in Victoria, BC, so the concentration on western Canada and the Pacific coast is not unexpected. Travels in these northern territories was rarely easy, so the books herein are regularly filled with exciting accounts. Here are a few of them.

We begin with the earliest book, and it is one of the most important of travel books, particularly of compilations. It is Richard Hakluyt's The Principle Navigations, Voyages, Traffiques and Discoveries of the English Nation... This is the preferred second edition of 1598-1600, more than double the length of the first. This book obviously is not limited to voyages to the Pacific Northwest, nor, despite its title, limited to English voyages, though that is its focus. Rather, it covers most of the voyages through the end of the 16th century of which Hakluyt was aware, with his greatest knowledge being of those emanating from his homeland. It was published in three volumes, the third being dedicated to America. It includes numerous voyages to the Pacific. This copy has the first state title page, dated 1598 and mentioning the "famous victorie" at Cadiz in 1596. This was later removed as the leader of that victory, the Earl of Essex, once Queen Elizabeth's favorite, fell out of favor after an unsuccessful campaign in Ireland. He later attempted a rebellion and was executed for treason. The original pages describing the victory were excised, but it contains the reprinted pages from around 1720 that were later returned. Item 17. Priced at CAD $75,000 (Canadian dollars, or approximately $57,175 in U.S. funds).

Next is a later collection of voyages, including another century-plus worth. Item 6 is A Collection of Voyages and Travels, by Awnsham Churchill, commonly known as Churchill's Voyages. Awnsham Churchill was a British publisher and bookseller, who became very wealthy from his trade (those were the days). His collection included many voyages herein described for the first time, or at least, the first time in English. This is the six-volume second edition of 1732, which added two more volumes to the the 1704 first edition. Additionally, it includes the two-volume Harleian or Oxford Voyages, often thought of as a supplement to Churchill's work. CAD $46,000 (US $35,067).

One doesn't usually think of Russians as American explorers, yet they were among the earliest in the northern Pacific. After all, they owned Alaska until 1867, when they decided some cash would be better than trying to manage a far-off land few Russians wished to inhabit. Item 2 is Voyages et Mémoires by Count Maurice Auguste Benyowsky (or Benyovsky or numerous other spellings). This is a first French edition, published in 1791. Benyowsky was an ethnically Polish Hungarian, not a Russian, and quite an adventurer. Those adventures included assisting America in its revolution, serving with Pulaski, and setting himself up as leader of Madagascar. Before all that, he participated in a rebellion against the Russian installed King of Poland. He was captured and sent off to far eastern Siberia. Undeterred, Benyowsky organized a revolt of Polish prisoners, captured a Russian ship, and set off on an escape voyage that took him through the Aleutian Islands and around Alaska. Consequently, his memoirs, said to be exaggerated, include information about the northern Pacific coast, along with Kamchatka, Japan, and Taiwan, where he landed. Benyowsky made his way to France, where with French support he became Governor of Madagascar, but later had a falling out with the French, went to America, later returned to Madagascar on behalf of the Austrians, and was killed fighting the French.

This next one is not one of the voyages mentioned in the title of this catalogue, but rather, it is one of those overland expeditions to British Columbia. It took a lot of traveling before Alexander Mackenzie actually made it to British Columbia. Mackenzie set out from Montreal in 1789, attempting to be the first to cross the North American continent all the way to the Pacific 15 years before Lewis and Clark. On his first try, he didn't make it. Mackenzie traveled to Fort Chipewyan on Lake Athabasca. That connects to Great Slave Lake via the Slave River, which in turn is drained by what Mackenzie came to call the "River of Disappointment" (today known as the Mackenzie River). For Mackenzie, it proved a great disappointment. He thought it would take him to the Pacific, but instead, it took him to what he called the "Frozen Ocean," the Arctic. Mackenzie overcame his disappointment and four years later, tried again. This time he used a series of rivers, and consulted local Indians to avoid making wrong turns again. He eventually emerged from the Bella Coola River in British Columbia to find the Pacific before him. Item 28 is the Scottish explorer's account of his two journeys, Voyages from Montreal on the River St. Lawrence Through the Continent of North America to the Frozen and Pacific Oceans in the Years 1789 and 1793... published in 1801. CAD 8,500 (US $6,480).

Next is the captivity narrative of John R. Jewitt. Jewitt was an educated Englishman who chose to be a blacksmith. He was also an adventurous young man who decided to travel the world. He signed on to a fur trading mission out of Boston, which took him to Nootka Sound, where the Captain traded with local natives. It was usually peaceful and friendly, and all seemed well when the Captain gave the local chief (Jewitt calls him "king") a rifle as a gift. The rifle broke, which evidently led to a major misunderstanding. They returned for a later dinner on board, and on cue, the Indians killed everyone except Jewitt and one John Thompson, the sail maker, who hid. The Indians spared Jewitt as their King, Maquinna, realized a metal worker would be useful. They also spared Thompson when Jewitt claimed he was his father and begged for mercy. Jewitt became a slave of Maquinna, but in the culture, he was treated much like a member of the family. He was compelled to marry and adopt tribal dress and customs, the better to discourage any attempt at escape. However, Jewitt was able to get a note to a trading ship, which held Maquinna captive until an exchange was made to free Jewitt and Thompson. In his two years of captivity, Jewitt became well acquainted with the Nootka culture and customs, as well as those of some neighboring tribes, and wrote about it in his book, A Narrative of the Adventures and Sufferings of John R. Jewitt... published in 1815 (second edition, same year as first), which was ten years after his escape. Item 20. CAD $1,400 (US $1,067).