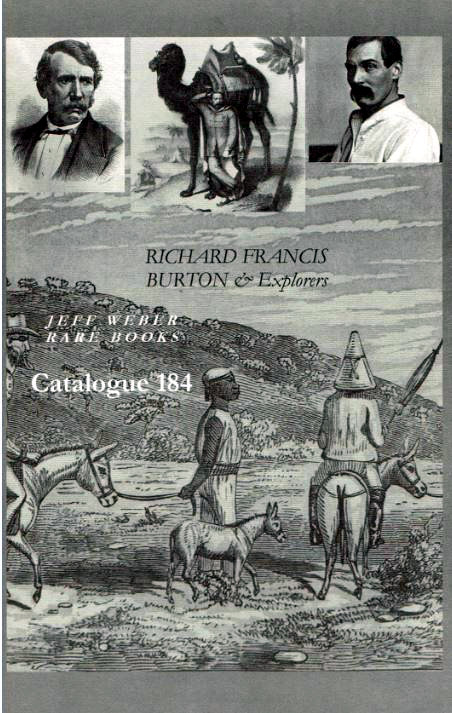 Jeff Weber Rare Books has issued their Catalogue 184 Richard Francis Burton & Explorers. This catalogue covers two mostly overlapping subjects. One is Richard Burton himself. The books by and about Burton come from a private collection relating to his career. Richard Burton was the most notable of the 19th century British explorers/adventurers. He undertook numerous difficult trips to exotic lands, exotic at least to the British. The Middle East and Africa were favorite destinations. Burton often suffered illnesses and other difficulties on his trips, none of which ever deterred him. He was also a student of languages and cultures, and wrote prolifically about the places he visited.

We begin with what is likely Burton's most notable travel, one that did not tax him physically the way some of his African adventures did, but one with a great level of danger nonetheless. Burton determined to conduct a pilgrimage to Mecca, something accomplished by millions before him, but by few non-Muslims. Anyone not a Muslim entering the holy city was likely to face death. Burton had to prepare well for his journey, disguising himself as an Afghan pilgrim. He had to speak the language perfectly, understand the culture, and know the religion well enough so that no one would suspect he was anything other than what he claimed. Despite the constant grave risk, Burton pulled it off. On return, he wrote this account: Personal Narrative of a Pilgrimage to el-Medinah and Meccah, published in three volumes, 1855-1856. The journey sealed Burton's reputation with the public as one of the era's greatest adventurers. Item 17. Priced at $8,500.

Next up is Burton's most famous traditional exploration. Item 24 is The Lake Regions of Central Africa. A picture of exploration, published in 1860. It is a typically detailed account of his journey, with much about the previously unexplored (by westerners) Lake Tanganyika. However, there was a very specific goal that Burton and his partner, John Speke, sought to accomplish, and it led to a bitter dispute between the two. They hoped to finally find the long sought source of the Nile. Both men became terribly ill. Burton was not able to get beyond Lake Tanganyika, but Speke, half-blind, pushed on. He reached Lake Victoria, which he concluded was the source of the Nile. Back home, Speke made his claims without consultation with Burton, a violation of their understanding. Speke also described Burton as something of a laggard for not pushing on. Meanwhile, Burton was unconvinced of Speke's claim. They planned a debate, but the day before it was scheduled, Speke was shot and killed by his own gun while hunting. It remains debated whether it was an unfortunate accident or suicide. Ultimately, Speke's claim of the source of the Nile proved correct, but only Burton got to write about many more travels in the following decades. $6,000.

Burton's travels did not often take him to America, but he did take one such journey in 1860. His account was published the following year: The City of Saints and Across the Rocky Mountains to California. It was not one of his most challenging travels. Burton arrived in New Orleans, and then took a three-week coach trip to Salt Lake City. From there it was on to California, after which he embarked on a steamer out of San Francisco for Mexico. He spent only 100 days in the U.S.A., but in typical Burton thoroughness, manage to generate 700 pages of copy from his journey. The most notable part of the book is his description of Salt Lake City and the Mormon community. He met with Brigham Young, and was fascinated with the faith and its then polygamous culture. He also studied America's western Indians. Burton was a keen observer and an objective one, having seen just about everything, so he did not share the negative impressions and descriptions common to American writers of the day, who rarely had much kind to say about the Mormons. Item 20. $800.

This book takes us just a little farther back in time. It is Burton's first work. Considering the number of illnesses he would experience in his travels, the cause of his opportunity to write this first book is fitting: Goa, and the Blue Mountains; or Six Months of Sick Leave, published in 1851. Burton had served with the British military in India during the 1840's, so this was a logical subject to explore while filling his leave time. The color of the binding indicates this is a first issue of the first edition. Item 14. $2,000.

David Livingstone carried out some of the most difficult explorations in the heart of Africa, though he is probably best remembered for being found. He traveled to Africa as a missionary, but quickly became more interested in learning than teaching. He explored the backwoods, acted as a "country doctor," helping the people he found, and became a vehement opponent of slavery. As he penetrated deeper inside the continent, and grew increasingly ill, he became "lost" to Europeans. That led to Henry Stanley's famous mission to locate him, and the classic line, "Dr. Livingstone, I presume," when he found the missing explorer in 1871. Despite his illnesses, Livingtone refused to go home and died in Africa two years later. His journals, along with his body, were returned to England by his faithful servants, Chuma and Susi, who had to bring him over 1,000 miles, much through difficult terrain. With the aid of Horace Waller, Livingstone's notes were published in 1874 in the book, The Last Journals of David Livingstone, in Central Africa, from, 1865 to his death. Continued by a narrative of his last sufferings, obtained from his faithful servants Chuma and Susi. Item 52. $1,000.