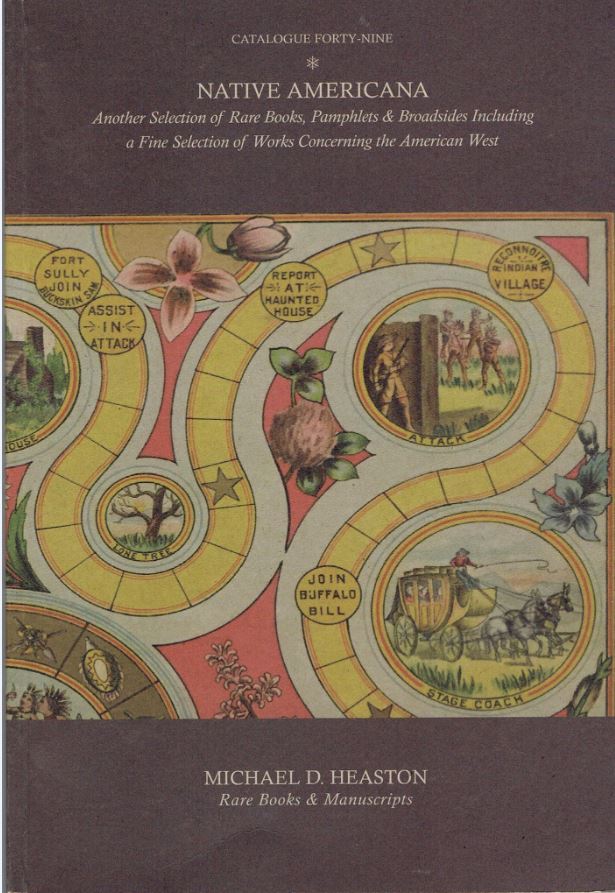 Recently arrived is Catalogue Forty-Nine Native Americana and the American West from Michael D. Heaston Rare Books & Manuscripts. This is a wonderful collection of 19th century to early 20th century western Americana, including much highly collectible, often quite rare or obscure material. As a point of clarification, this catalogue of Native Americana is not limited to Native Americans, those once erroneously thought to be natives of India. There are many items related to America's "Indians," but much is about other aspects of the American West. Here are just a few samples of what you will find in this catalogue.

Before the West could be won, you had to get there. In the early days of an independent America, the West was what is today the Midwest. At that time, the Mississippi River formed the nation's western boundary. That was the case when this guidebook was first published by Pittsburgh printer Zadok Cramer: The Navigator: Containing Directions for Navigating the Monongahela, Alleghany (sic), Ohio, and Mississippi Rivers... This book provides river guides to the Mississippi and along that river for travelers coming from the east. It was first published in 1802. This edition is from 1808 and is styled the sixth edition, but only three prior ones are known. It is particularly noteworthy as it contains an appendix which for the first time adds a description of Lewis and Clark's journey up the Missouri and Columbia Rivers. This was well before Lewis and Clark's official account was published. However, Cramer had published Patrick Gass' account of the journey, the first by any actual participant, so he had access to Gass' information. Item 37. Priced at $17,500.

It would take until the 1840's before more than a handful of "mountain men" trappers would venture far to the west, but plans were being laid earlier. Item 83 is described by Howes as the "Earliest Oregon colonization scheme." It was the work of New England schoolmaster Hall Jackson Kelley in 1831: A General Circular to All Persons of Good Character, Who Wish to Emigrate to the Oregon Territory. Kelley was a man of bold ideas, but limited follow through. In this book, he counts off the benefits of what he saw as fertile land in Oregon, the last such place left to be settled. What he proposed was not a trading company, such as Astoria, but a true settlement at Gray's Bay, just north of the mouth of the Columbia River, with a trading post at the confluence of the Columbia and Multnomah (Willamette) Rivers. A woodcut plan is displayed on the last page. Kelley also thought such a settlement would be a positive influence on the natives, a selling point with ministers to whom he sent this book. The plan came close to implementation, Kelley garnering support from a few congressional heavyweights such as Senator Thomas Hart Benton, but when Congress failed to provide assistance, the plan fell through. John Howell, citing Jones, sadly tells us, "We are indebted to him for pouring everything he had into his Oregon projects---and we have benefited from them---while he lived a frustrated life to die an outcast and despised eccentric." Item 83. $12,500 (that represents an appreciation of 10 million percent from its original price of 12 ½ cents).

It would take another decade, but by the mid-1840's, the wagon trains to Oregon began to roll. The lucky had uneventful crossings. Most experienced some sorts of hardships, and a few the very worst. Weather was often a problem, especially for stragglers who ended up in the mountains as winter approached. The most notable was the Donner party. Here is another group that suffered similar tragedies, although their problem was hostile Indians rather than weather. Item 54 is Left by the Indians. Story of My Life, by Emaline Fuller. It was published in 1892, but recounts a journey west in 1860. It is the only account of the Utter-Myers party, which left Wisconsin with 54 participants, but only 15 were still alive when they arrived. Eberstadt described the journey as, "an expedition which rivaled in death, suffering, and final resort to cannibalism, the tragic journey of the Donner Party." Some in the party were dragged off, some killed, and the remainder left to starve. Ms. Fuller recounts how they had to eat the children who died, and in one case, digging up the body of a man who had died for food. $3,750.

Item 157 is the Outline Description of the Posts in the Military Division of the Missouri... published by the Headquarters Military Division of the Missouri in 1872. This provides detailed descriptions of the various agencies and Indian reservations in their territory, which covered most of the West outside of the Pacific coast states and territories. Over 50 forts and camps are listed. It includes a map showing the location of military posts, reservations, and routes. There is also a summary of Indian treaties. Tipped in is a table of distances. Heaston notes that it is unlikely that many copies were published as it was meant for commanders in the field. This copy comes with a particularly notable provenance. It was the personal copy of General Philip Sheridan. Sheridan had been stationed in the West, but was called east by Ulysses Grant during the Civil War. He was closely associated with Grant and Sherman and participated in the battles that brought the war to an end. He then returned west, where he became head of the Military Division of the Missouri, commanded the often brutal Indian wars, and later headed the entire army. $3,500.

There is some irony in this next item. It is What the Salt River Valley Offers to the Immigrant, Capitalist, and Invalid. It was published by the Maricopa County (Arizona) Immigration Union in 1887. It encourages immigrants to come to "the Garden of the Southwest." In recent years, Maricopa County's Sheriff, Joe Arpaio, built a national reputation by being less than welcoming to immigrants. Item 9. $875.

Here is an unusual way to promote your store. It is a sheet which states, Presented By The Golden Eagle Clothing House, of Kansas City, Missouri. What they have presented is a photograph on the sheet, which is not one of a nice new suit or dress. Rather, it is photo of the body, head and shoulders, of Jesse James, taken from the files of the funeral home that buried him. Perhaps Golden Eagle provided him his last outfit. It is undated. Item 68. $2,500.