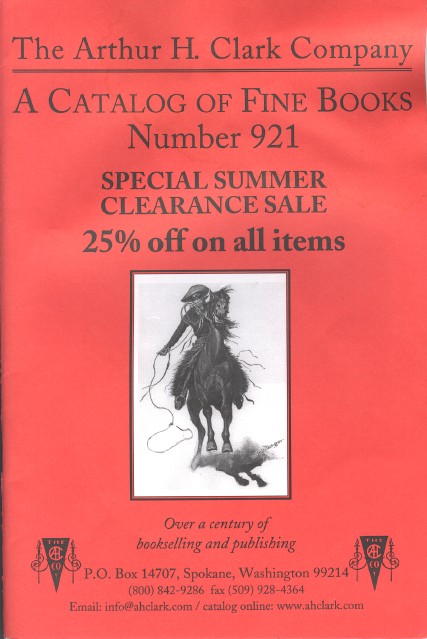 Catalogue 921 is similar yet different from the typical one issued by The Arthur H. Clark Company. It is similar in being filled with items of primarily western Americana. For those who are counting, there are 444 pieces in all. What is not typical is that this is a summer clearance catalogue. All items are discounted 25%, provided you order by September 15. Therefore, we recommend that you stop procrastinating and place that order today. Here are just a few of the items you will find on sale through September 15.

Items 4-11 are a series of interesting state and city guides, prepared by the Federal Writers' Project of the Works Progress Administration. This may seem an unusual source for such information, but during the Depression, scholars, like everyone else, often found themselves unemployed. Just as the government, through the WPA, put laborers to work building roads and the like, it put writers and scholars to work writing books. Most of these works were created in the late 1930s. By the time the War rolled around, the government had more pressing needs for its scholars, as soldiers. Guides offered in this catalogue are for Connecticut, Mississippi, Montana, Rhode Island, Vermont, New Orleans, and Washington, D.C. Priced from $40 to $75.

Going back almost a century earlier, you can read about the Deep South in Flush Times of Alabama and Mississippi, by Joseph Baldwin. This is a humorous look at life in these rural states from a lawyer (lawyers were evidently humorous at that time) recently arrived from the sophisticated state of Virginia. However, if you think the "flush" part is some sort of potty humor, the book was published in 1853, when even Virginians were relegated to using outhouses or emptying their chamber pots on the street below. Item 15. $75.

Buffalo Bill, William Cody for those being more formal, was a scout for the U.S. military in the west in the years after the Civil War. At least, this was his occupation for a few years, and by all accounts, he was very good at this profession. Some people think that if he had spent more time with Seventh Cavalry than with the Fifth, Custer would have died an obscure old man, rather than a legendary young one. However, scouting was the brief part of Bill's career. Most of it was spent as a showman, touring the world with his Wild West Show, an exaggerated if not downright fictional picture of the Old West. Item 246 is a 1919 biography by Mrs. Buffalo Bill, technically Louisa Frederici Cody, entitled Memories of Buffalo Bill, by his wife. $35.