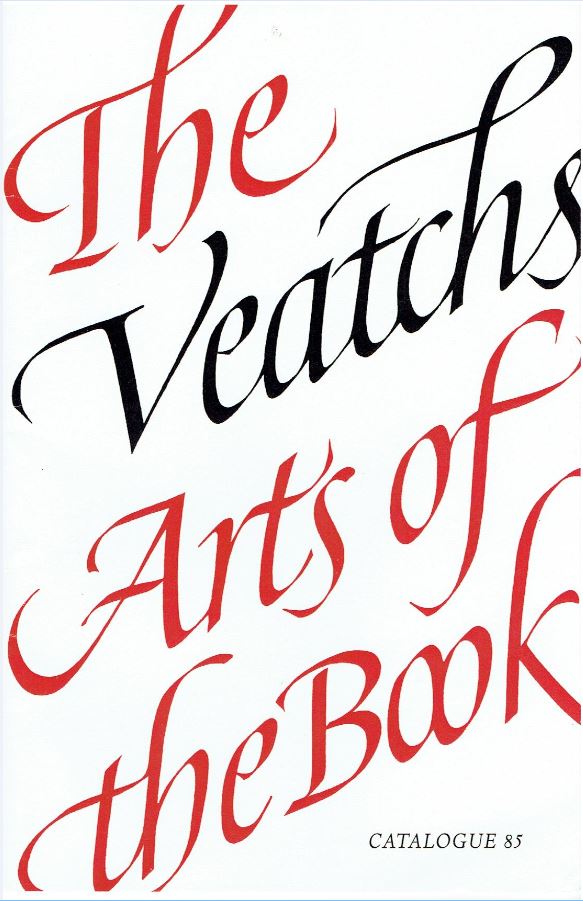 The Veatchs Arts of the Book recently published their Catalogue 85. It is shorter than their usual catalogue, but is filled with new acquisitions. They are in the process of drawing their regular inventory out of storage and getting back to normal following the move to their new home in Hamburg, New York. Here are a few selections from these new acquisitions.

We begin with one of the 40 books published by the Doves Press from 1900 until 1916. It is Shakespeare's The Tragedie of Anthony and Cleopatra, published in 1912. Doves was noted as one of the best of the fine presses, but it might also be considered a tragedy itself, the tragedie of Thomas and Emery. Thomas Cobden-Sanderson and Emery Walker founded the press as partners. Both had been cohorts of the late William Morris and his Kelmscott Press, the finest press of them all. However, the partnership did not work well. Cobden-Sanderson thought Walker insufficiently dedicated. It broke apart, but the two had an agreement that the typeface and related equipment of Doves would go to Walker if Cobden-Sanderson died first. When the latter determined to close the press in 1916, but was not yet dead, he decided that the Doves type would never be used for inferior productions. Since the only way he could assure the same from then until forever was to destroy the type, he proceeded to throw it all in the Thames River. It led to his poor widow being sued after he died. Ironically, the Doves typeface was recently reproduced electronically, technology eventually overcoming all obstacles. You can now use it for your dime store novel or scandal sheet. Fortunately, books such as this Doves Shakespeare are still around to appreciate the type in a form of which Thomas Cobden-Sanderson approved. Item 14 is one of the 200 copies printed. Priced at $1,750.

Speaking of the Kelmscott Press, item 22 is one of three of their works offered in this catalogue, Maud, A Monodrama, by Alfred, Lord Tennyson. It was originally published in 1855, but the Kelmscott edition was released in 1893. The Veatchs describe it as, "A fine, partially unopened, almost pristine copy." It is one of 500 copies on handmade paper. $2,500.

Next up is a leaf book, though it is quite a bit more than simply a vehicle for a few leaves. The title is A Century for the Century: Fine Printed Books 1900-1999, by Martin Hutner and Jerry Kelly. It was published by the Grolier Club in 1999. This is one of 50 Deluxe copies signed by the authors. The Veatchs describe it as "A fully illustrated exhibition catalogue of 100 books from American and European presses, notable for their beauty and excellence of production." It contains 46 color illustrations and 54 halftones (46+54=100). Then there are the leaves. There are five leaves, taken from twentieth century fine press books. They include one from the Limited Editions Club, Officina Bodoni, Hermann Zapf, Arion Press, and Stanbrook Abbey Press. Item 18. $825.

Here is a very different sort of leaf book: The Lambiad. A Collection of Leaves from the Offices of Famous Printers, Showing Variations in the Treatment of a Similar Themes. It was published by the Columbiad Club in 1936 in a run of 30 copies. It contains five leaves, from books published by Aldus Manutius, Caxton, Barbou, "Baalow" (Barlow), and Bodoni. No it doesn't. This was all a hoax. None of the leaves was real, though the quality of the fakes is exceptional. The Caxton not only featured woodcuts, but even has wormholes. This copy belonged to club member Harold Hugo, later President of Meridian Gravure. Item 35. $1,200.

After a year of divisive elections, it's nice to have a reminder of our common heritage as Americans. Item 3 is the Constitution of the United States. Published for the Bicentennial of its Adoption in 1787. This was published on behalf of the Library of Congress, naturally enough in 1987. Most appropriately, it makes use of the colors red, white and blue throughout. This printing of the Constitution was produced by San Francisco's Arion Press. This was the press founded by Andrew Hoyem in 1973, a successor to the legendary Grabhorn Press. $1,600.