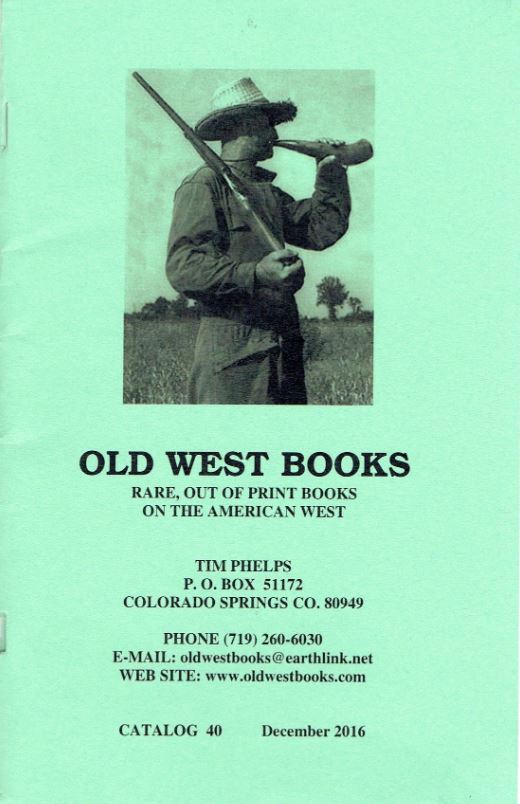 Old West Books has published their Catalog 40 December 2016. It's not hard to guess what type of material they handle, but just in case, it's "rare, out of print books on the American West." While some books describe the classic names of the West (what western catalogue doesn't have something on Custer and Buffalo Bill?), there are also many accounts written by people most obscure. These are the ranchers, the Oregon travelers, the people who knew the Billy the Kids even if they weren't a Billy the Kid themselves. They are the observers, the reporters, and many lived in those days when the West was won, or perhaps, the Old West was lost. Here are a few.

We start with an odd and unusually rare item. The title is A Pioneer of Fifty-Three, by Mrs. S. Watson Hamilton, published in 1905. The 53 refers not to her age but to 1853, when she traveled from Iowa to Oregon with her family. She was just 14 when she went, and she recounts the hardships and challenges they faced, the lack of organized authority, escaping a trap set up by Indians, lost for weeks in central Oregon, and having to cross the Cascades now covered in snow, exhausted, hungry and ill. Ironically, they had undertaken the trip to live in a climate where there was no winter as they had known it in Iowa. In an unusual twist, Mrs. Hamilton recounts her tale in verse. I guess this is something of an epic, or semi-epic poem. As for the rarity, Howes' Usiana states that only three copies survived the burning of the author's home. Eberstadt was a bit more generous, claiming four copies survived. Evidently, her house burned down while Mrs. Hamilton was delivering the few surviving copies to friends. However, the presentation on this copy is signed on behalf of the author by Dr. S. Hamilton, presumably a relative. Item 38. Priced at $4,750.

How tough was that journey to Oregon? Evidently tougher than many of us who played the Oregon Trail game realize. Here is another account: David S. Maynard and Catherine T. Maynard. Biographies of two of the Immigrants of 1850, edited by Thomas Prosch, published in 1906. According to the Preface, "The Overland Narrative is in day-by-day form, and the journey was a hard one indeed. The immigrants tired of themselves and of each other, stretching out these conditions for a period of five months, drove some of the participants into suicide, others into insanity, and left many a physical wreck for whom there was no possibility of recovery." Other than that, Mrs. Lincoln... The Maynards were involved in the beginnings of the Washington Territory, traveled to California in 1851, and had to battle Indians. Item 79. $350.

General George Armstrong Custer was a great American hero until things went terribly wrong at Little Big Horn. The massacre of Custer and his men, and questions of why he was there in the first place, severely tarnished his reputation. Custer's penchant for self-promotion undoubtedly made the fall from grace that much more dramatic when he proved not to be invincible. His widow, Elizabeth, spent the last 50+ years of her life trying to rehabilitate his reputation, but once she was gone, there was no one left to counter the image Custer had become. That was until Brice Custer wrote this book in 1999: The Sacrificial Lion. George Armstrong Custer From American Hero to Media Villain. Brice was George's closest living relative at the time (he died in 2007). George had no children, nor did two of his brothers. Only his youngest brother kept the name alive. Brice was George's great grand nephew. Brice also served in the military, flying airplanes and obtaining a degree in nuclear engineering, subsequently being assigned to the Physics Department at the Air Force Academy. George rode horses and fired rifles. Times change. Still, Brice's reaction to the characterizations of his great grand uncle are more from the gut, as he defends Custer's reputation against all the assaults and negative depictions that evolved about the man. Item 14. This copy is signed by the author. $45.

Speaking of General Custer, item 18 is a biography of a man who claimed to be the first white man to see the Custer Battlefield after the its namesake's disastrous last stand. It is Life and Adventures of Frank Grouard, by Joe Debarthe, published in 1894. Grouard was the son of a Mormon missionary and Polynesian woman he met while serving a mission in the Pacific. He was raised in Utah, but at age 15, ran away. After working as a stage driver and mail rider, he was captured by the Sioux at the age of 19. He was said to have been adopted as a brother by Sitting Bull, but after seven or eight years in captivity, he escaped. He became a scout for General Crook, and it was at the time of the Battle of Little Big Horn that he read smoke signals which revealed that Custer was being overwhelmed. Others were unconvinced, but according to Grouard, he rode all day to the battlefield site, the first white man to discover what had happened. He continued in his role with the army and was present at the Wounded Knee Massacre. $2,250.

Item 65 is the rare first edition of Life of the Marlows as Related by Themselves, published in 1892. The Marlows were five brothers, one of whom accidentally killed a sheriff. He managed to escape, but was killed by bounty hunters. The other four brothers were arrested and jailed. They, too, attempted escape. Two of them survived to write this book, Charles and George Marlow, the other two did not. Howes explains, "Five respected, but nomadic, brothers, caught in a conspiracy concocted by a Texas sheriff, had to shoot it out with the county's entire male population. Only the two writing the story survived." They were exonerated. This book became the basis for the John Wayne film, The Sons of Katie Elder." $52,500.