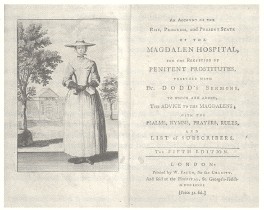 
In 1640, the congregation of St. Anthony's in Cornwall received a most dramatic, if unclear message from the Lord. The remarkable event is retold in, The voice of the Lord in the temple. Or, a most strange and wonderfull relation of Gods great power, providence, and mercy, in sending very strange sounds, fires, and a fiery ball into the church of Anthony in Cornwall... Fourteen people were "smitten" by the thing, with around 200 being present to witness the event. Several people found parts of their body turned numb, one felt as if the water in his bladder had turned boiling hot. Amazingly, there were no deaths except for a small dog. It certainly must have scared the bejeezus out of this congregation, which would have struggled to divine the message. Today, we would attribute the event to a powerful case of ball lightening or possibly a small meteorite. Item 6. L1,100 (US $1,976).

William Dodd was a minister who engaged in a number of charitable causes, including reforming prostitutes, resuscitating apparently drowned persons, and freeing people imprisoned for small debts. Item 25 is a 1776 fifth edition of his, An account of the rise, progress and present state of the Magdalen Hospital, for the reception of Penitent prostitutes. If the lifestyle was a bit austere there, it was still a remarkably charitable undertaking for the time. Unfortunately, Dr. Dodd did not live an austere lifestyle himself, and was dismissed as the hospital's preacher when he went into exile in Geneva to escape his creditors. A year later, he forged a bill of exchange in an attempt to alleviate his debts and was hung for the crime. L1,750 (US $3,144).