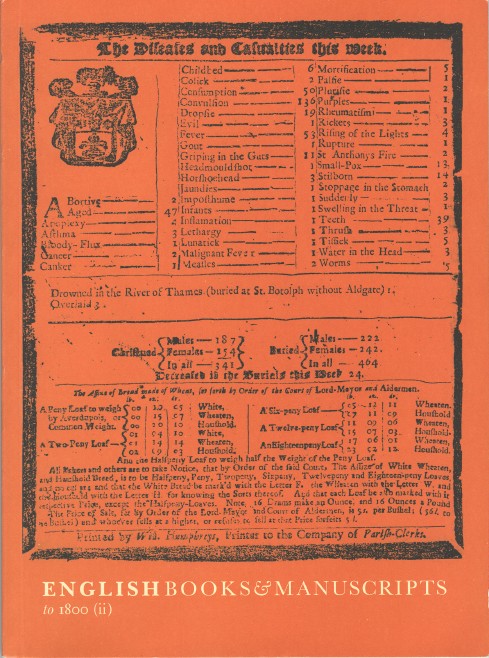 The latest catalogue from Bernard J. Shapero Rare Books has arrived, English Books and Manuscripts to 1800. This is a diverse collection of primarily 17th and 18th century books covering a wide range of topics: politics, science, medicine, piracy, travel, executions, witchcraft and whatever else interested people in long ago times. These are works which make for some fascinating reading as well as antiquarian collecting. Here are a few samples.

Many people associate witchcraft trials with America as a result of some terrible events in Salem, Massachusetts, in the late 17th century. However, it was activities in and writings from Europe that inspired this piece of insanity. Item 47 is a compilation published in 1693 attributed to the late British Judge Sir Matthew Hale and Edward Stephens entitled, A collection of modern relations of matter of fact, concerning witches & witchcraft upon the persons of people. Hale had presided over a witchcraft trial in 1662 and found it hard to believe that three children from different families could possibly have colluded to accuse two innocent old women of witchcraft. The result was they were convicted and Judge Hale sentenced them to their executions. Other sections include a translation of an account from France where 32 teenage girls in a home for poor children were discovered to be witches, and a 1644 case from Yarmouth where 16 others "confessed" to being witches and were, naturally, executed. Item 47. Priced at £850 (British pounds, US dollar equivalent of $1,525).

By the beginning of the 18th century, the tide had turned against those who used accusations of witchcraft to attack others. Item 48 is, The tryal of Richard Hathaway, upon an information for being a cheat and imposter, for endeavoring to take away the life of Sarah Morduck, for being a witch... Hathaway claimed all sorts of ailments caused by the spells cast by Mrs. Morduck. He had become blind and mute as a result of these spells, but was relieved of these symptoms when he scratched his alleged tormenter. When a new spell returned these symptoms, an inquiring clergyman tried an experiment, having a woman supposed to be Mrs. Morduck reach an arm through a curtain for Hathaway to scratch. He did, and was "cured," but the arm was not that of Mrs. Morduck. The trap did not matter for believers, who concluded the witch had played a trick. Besides which, there were other symptoms. When given water, Hathaway would vomit pins. It was noted that the vomited pins managed to stay dry, and Hathaway carried pins in his pockets, but believers saw no contradictions. He also was unable to eat, although peepholes drilled into his room revealed him feasting when no one was looking. Nonetheless, Mrs. Morduck was put on trial, and though acquitted, many believed the court had been bribed to find her not guilty. However, with the tide turning, Hathaway himself was put on trial a year later, convicted, and sentenced to six months in prison and a good flogging. He was lucky. If Mrs. Morduck had been convicted, she would have been executed. £650 (US $1,166).