52 Years for The Pages of Yesteryear 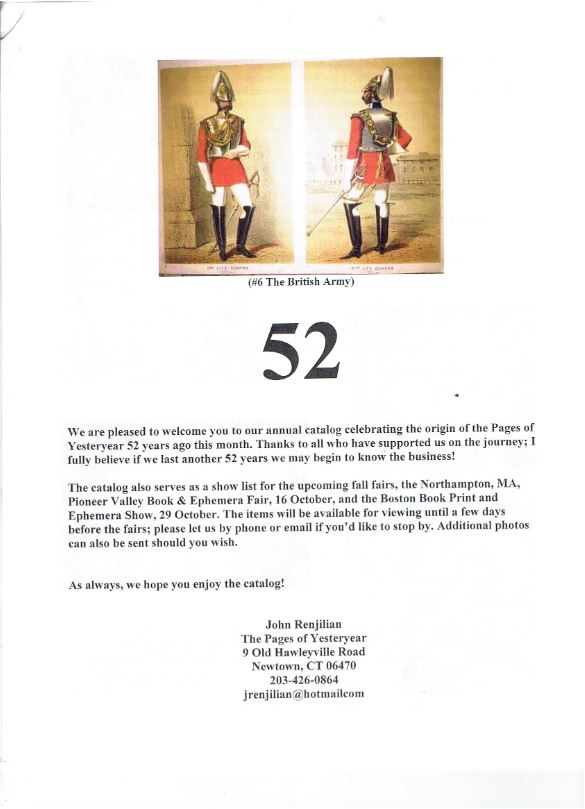 52 Years for The Pages of Yesteryear

The Pages of Yesteryear has issued a catalogue whose title is simply two digits – 52. This is not so much a catalogue number as a celebratory number. It recognizes owner John Renjilian's 52 years in the trade. That would take us back to 1964, the year of the British invasion – not the Revolution, but the Beatles coming to America. Seems like only Yesterday. This catalogue offers a mix of even older, rare and obscure books and personal manuscripts from people less famous than the Beatles, but who perhaps are more typical representatives of their times. Here are a few samples from those long ago times.

During the 19th century, New Hampshire's White Mountains became a favorite summer vacation spot for residents of the Northeast's large cities. Impractical to reach in the past, the opening of railroads made it possible, though certainly not convenient by today's standards. Item 22 is William Guild's New York and the White Mountains; with a Complete Map, and Numerous Wood-cut Views of the Principal Objects of Interest Upon the Line, published in 1852. This is a railroad guide, showing the towns and railroads along the way. The trip from New York to the White Mountains was possible, but it wasn't like you could catch an Amtrak train and go. The route was littered with small, local railroads that built up to serve regions. It meant numerous transfers and matching schedules with the various railroads between your starting point and destination. At least a guide like this was available for 25 cents to show you how to do it. Priced at $350.

Next up we have a Sketch of the Life, Personal Appearance, Character and Manners of Col. R. A. Steere and Wife Including the History of Their Travels, Courtship and Marriage. The author was Reuben Allen Steere himself, his autobiography published in 1883. You probably don't know Col. Steere. He was just a little too big to achieve lasting fame. Steere was a little person, one who lived in a time when small people often made their living in sideshows. For many years, he says, he resisted calls from Barnum and others to do shows. Instead, he worked on his farm in Rhode Island, using "implements suited for my size." That size was 3' 8" tall, his weight 43 lbs. However, in time he wanted to see the world, so he quit farming and joined up with the Lilliputian Opera Company. It was there that he met his future bride, Rebecca Ann Myers, from Indiana. She was suitably smaller than the Colonel – 3' 5" and weighing 39 lbs. They then got to tour with the company after their 1880 marriage, and at the time of this 1883 biography, planned to see the whole country and maybe even Europe. The Steeres have not remained in historic consciousness as much as Gen. Tom Thumb and his wife, perhaps because they were too tall – Thumb being 3' 4", his wife Lavinia 2' 8". Afterwards, the Steeres retired to Chepachet, Rhode Island, where Reuben became a truant officer and Rebecca operated a restaurant and candy shop. He died in 1915 at age 76, she in 1927 at age 74. Item 43. $250.

Here is a man who was in the wrong place at the wrong time. That time and place was 1641 England. Sir Edward Harbert had served around two decades in Parliament when King Charles I summoned him to be attorney general in 1640. This time may not be meaningful to most Americans, but for the English, these were the days leading up to the Civil War. The King summoned his Attorney General to issue articles of impeachment against five MPs on grounds of treason. Instead, Parliament impeached the Attorney General. Item 37 is The Impeachment of Sir Edward Harbert Knight His Majesties Attorney Generall by the Commons Assembled in Parliament, published in 1641. Harbert pleaded he was just acting on behalf of his King, but to no avail. He was stripped of his office and placed under something like house arrest. He would go off to serve Charles I in the days ahead, but when the King was executed, Harbert escaped with members of the King's family to Europe, where he worked for the family until his death in 1658, two years before the Restoration. $350.

Item 27 is a biography of a man you've never heard of. It never made it to print. It is a 36-page manuscript biography of Samuel Whiting by his daughter, Florence W. Brown. It may well be the only significant reminder that he ever lived. The fact that it is no longer in his family is a sign they have either disappeared or lost track of their 19th century roots. Samuel Whiting was born in 1830, married in 1851, had one surviving child, born in 1862, and died in 1867 at the age of 37. What he did leave was a lasting impression and devotion in a daughter who was only five when he died. Mrs. Brown explains that she is writing this memoir so that her son, whom she says resembled his grandfather in many ways, will know who he was. Saying that her father had been a great influence, she adds, "...even after these many years," she is still "so conscious of his presence that I should feel no astonishment if I heard his voice." Whiting had originally planned to be a carpenter, but a hand injury prevented that. Instead, he got a "medical degree" from a college in Connecticut and became a homeopathic practitioner. First working in upstate New York, he later moved to Augusta, Maine, to set up practice. Mrs. Brown says he developed an "enormous practice," but it required driving many miles in all kinds of weather ("and the Maine climate is rigorous") and "the strain was too great." Presumably, that is why he died so young. $200.