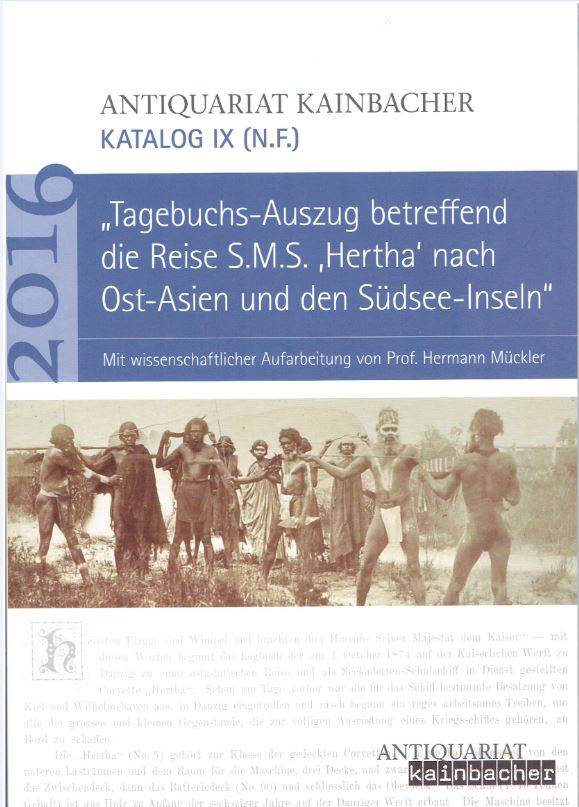 This month we review Katalog IX from Austrian bookseller Antiquariat Kainbacher. The title is Tagesbuchs-Auszug betreffend die Reise S.M.S. 'Hertha' nach Ost-Asien und den Südsee-Inseln 1874-1877. That translates to "Diary Excerpt Concerning the Journey S.M.S. 'Hertha' to East Asia and the South Seas 1874-1877." That is more than just the title of this catalogue. It is what is in the catalogue. This is a one-item detailed presentation of a rare and remarkable book, one for which you will struggle to find another copy. It is a book filled with mounted photographs from this long ago journey of the Hertha.

We will begin with some history. The Hertha was a Prussian, later German naval vessel. She was launched on November 1, 1865. The ship had already served many missions when called on for this journey to the South Seas. She had served in the Prussian-Austrian War, did duty in the Mediterranean, took part in the opening of the Suez Canal, and fought pirates off the Chinese and Japanese coasts. In 1874, she was called on for this mission to the South Seas. Under the command of Captain Eduard von Knorr, she was dispatched to reach some trade and other agreements with Samoa and the Tonga Islands. After returning home from her round the world voyage in 1877, the Hertha was sent to the world exhibition in Melbourne in 1881. That may have been her last serious mission. The Hertha was dropped from the list of warships in 1884 and demolished in 1902.

Gustav Adolph Riemer was born in 1842. He entered the Prussian Navy in 1859. He had served as a paymaster on previous journeys as well as this one. On this trip, he took a couple of cameras, bulky items, one with two lenses for stereoscopic views. He also brought equipment for developing glass plates in the cramped quarters. That he came back with so many is remarkable. The copy herein offered by Kainbacher contains the full complement of 357 photographs.

Little else is known about Riemer. He married Martha Maria Specht in Berlin in 1880. He served 29 years in the navy, almost 10 at sea. Riemer obviously had a knack for photography. Such a skill was virtually unheard of on German voyages at the time. He appears to have still been sailing and photographing in the early 1880's, but after that his history seems to have been lost. It is known that he died in 1899 at the age of 57, though the cause is unknown.

The catalogue begins with a five-page essay about Riemer, the Hertha, and their times, by Hermann Muckler. Muckler is a professor of social anthropology at the University of Vienna and President of the Anthropological Society of Vienna. He is an expert on studies such as this of Pacific natives at this time, and probably knows more (of what limited amount can be found) about Gustav Riemer than anyone else.

Antiquariat Kainbacher has divided the catalogue into seven sections: Introduction, China-Japan-Bonin Islands, Mariana Islands – Caroline Islands, Palau Islands – Siberia Vladivostok, Samoan Islands, Tonga Islands, and New Zealand – Australia. The introduction contains Riemer's description of what he saw. The remaining six sections are strictly examples of Riemer's photographs, other than the captions which accompany some. A large number of Riemer's photographs are displayed, from full-page to wallet size. This catalogue will provide a greater insight into Riemer's work, and look at these various Pacific natives, than anything other than Riemer's Diary itself. As for the original, it is offered for sale at a price of €55,000 (euros, or approximately $60,333 U.S. dollars). This is a copy of the 1878 first edition (a second was published in 1883).