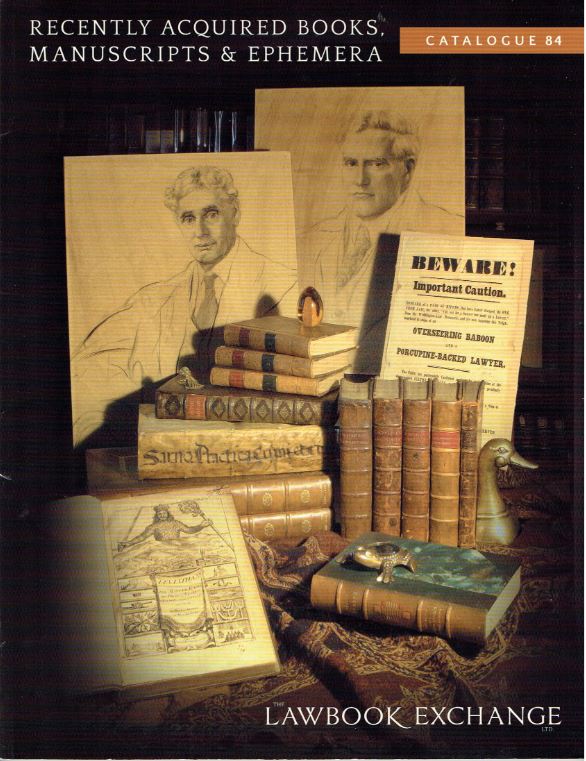 The Lawbook Exchange has issued Catalogue 84, Recently Acquired Books, Manuscripts & Ephemera. Naturally, the material in some way involves the law, but within the field it varies widely. There are serious discussions of legal issues, such as the framing of America's national and state constitutions. There are legal treatises, many centuries old. English law is particularly well represented, but since everything pre-1776 English is also American law, America is comparably well represented. Then there are numerous accounts of trials, some sensational involving crimes from murder to infidelity, both magnets for public curiosity. Everyone from legal scholars to amateur sleuths will find something of interest here. Now, here are a few examples.

We begin with a rare pamphlet from a two-century old debate concerning punishment for crime that continues to this day, the influence of each position endlessly ebbing and flowing. Item 53 is Observations on a Letter by John Eardley-Wilmot, Esq., published in 1820. Eardley-Wilmot was a Warwickshire Justice who argued that severe punishment of juvenile offenders often led them into a life of crime. He argued for better prison conditions and greater attempts to rehabilitate juvenile offenders. The unnamed author of this reply pamphlet takes the opposite position, favoring more severe punishment as a better deterrent. Priced at $500.

While at times it seems the legal process moves slowly, we have actually made great strides since the 17th century, as this old, gruesome case attests. Item 20 is a 1678 broadside headed, An Account of the Digging Up of The Quarters of William Stayley, Lately Executed for High Treason, For That His Relations Abused the Kings Mercy. Nov. 30, 1678. Stayley (or Staley) was a Catholic banker at the time of the anti-Catholic Popish Plot. The claim was that a group of Catholics were plotting to kill the King, a fabricated claim used by certain anti-Catholic individuals to forward their own interests. A low-life scoundrel named Carstairs saw this alleged plot as a way to enrich himself. He told Staley that he had overheard him say that he would kill the King. Unless Staley paid Carstairs a bribe, he would tell authorities. Staley refused, whereupon Carstairs made his claim and Staley was arrested for treason. Under the hysteria of the time, Staley was convicted, despite the absurdity of the charge and the unreliability of the witnesses. He was executed, his body quartered. However, the King "graciously" consented to his bodily parts being delivered to his family, rather than the usual display of them in cases of treason. However, Staley's friends responded by having a grand funeral in his honor. This upset the King who then ordered Staley's body parts be dug up and his head displayed on London bridge. Thankfully, this apparently brought that custom to an end, Staley's head being the last displayed on London Bridge. $950.

Jeremy Bentham was a noted English jurist and philosopher, the founder of utilitarianism. This philosophy says that the rightness of measures should be determined by whether they produce the greatest amount of happiness to the most number of people. This philosophy led him to humanitarian conclusions on many issues, such as abolition of slavery, economic reform to aid working people, equal rights for women and gays, free speech, and separation of church and state. For the legal code, he advocated for the repeal of the death penalty and physical punishment, as well as prison and sentencing reform. Item 8 is Traités de Législation Civile et Pénale... published in 1802. This is Bentham's treatise on penal reform. Though Bentham was English, the first edition of his work on penal reform was published in French. It was not published in English until 1840 when an American edition was issued. This book, which contained some articles originally written in French and others translated by Bentham's friend Pierre Dumont, was edited by Dumont. $2,000.

Item 111 is a draft of a letter in Bentham's hand he wrote dated December 9, 1824. It clearly reflects his values. In it, Bentham writes of sending a £5 contribution to the Catholic Rent. The Catholic Rent was a fund designed to eliminate political discrimination placed on Catholics by the government. While Bentham was not Catholic, he sympathized with his "oppressed brethren of the Catholic persuasion." However, he goes on to request they "neither retaliate persecution by persecution, nor attempt redress by insurrection, but unite with the liberal among Protestants for the attainment of security for all, against depredation and oppression in every shape, by the only practical means – Parliamentary reform." $3,500.

Item 175 is a complete run of The Herald of the New Moral World and Millennial Harbinger, a nondenominational liberal Christian newspaper published from 1841-1842. The most notable issue is Vol. 1, No. 17, with the headline, Shocking Murder of Mr. Adams – Our Printer – The Body Discovered on Board a Vessel – Arrest of the Supposed Murderer. How Mr. Adams body got on board the vessel is a story unto itself. He was not killed there. The murderer was John C. Colt. He owed Samuel Adams some money. Colt was a respectable man, a bookkeeper, teacher, and law clerk. However, he acted in a most unrespectable manner when Adams attempted to secure repayment. Colt claimed Adams attempted to choke him with his tie, whereupon Colt struck his creditor four times with a nearby implement he thought to be a hammer. To Colt's chagrin, it turned out the implement was an axe. Colt responded as most innocent people would under the circumstances. He salted Adams' body and put it in a crate on a ship sailing from New York to a fake address in New Orleans. He figured no one would know what to do with the body and just dispose of it. It didn't turn out as planned. Colt was caught, tried, convicted and sentenced to death. Numerous appeals and requests for a pardon were made. Colt had connections. His brother was Samuel Colt, designer of something much neater for killing people than an axe – the Colt gun. Indeed, Samuel even testified at trial, for some reason using the venue to promote his firearms. It was all in vain. John Colt only escaped the hangman's noose by stabbing himself in the heart the morning he was to be executed. $1,250.