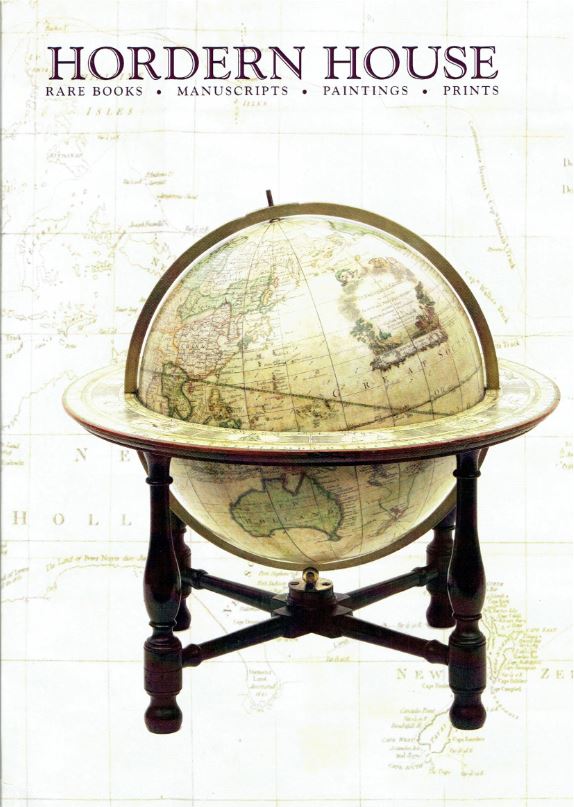 The latest catalogue from Hordern House.

Hordern House has issued a new catalogue that does not appear to have a title or number. It does note the year – 2016. What it does have is 45 items that are highly collectible and important. Hordern House is located in Australia, so there is much of interest to people from Australia or who collect Australiana. However, since much of early Australian history is tied around explorations, those who collect travels and voyages will likewise be excited by the material to be found. Here are a few samples of what is being offered.

Captain James Cook undertook three voyages from 1768-1779, each of major importance. For Australia, the first was the most significant. Cook was sent out to the Pacific to observe the Transit of Venus, but once that was effected, he opened up sealed orders which told him to proceed in an attempt to locate an imagined huge southern continent. He did not find what did not exist. Its nonexistence he would prove in his second voyage. What he did accomplish was a complete circumnavigation and mapping of the coast of New Zealand, and then became the first European to observe the eastern coast of Australia, where most of its population resides today. He put in for awhile at a place he called Botany Bay, today's Sydney. Cook provided the notes, but did not write the official account of his first voyage. He was too busy preparing for the second. That task fell to John Hawkesworth. Item 11 is his An Account of the Voyages undertaken by the Order of His present Majesty for making Discoveries in the Southern Hemisphere... published in 1773. The first volume covers earlier explorations, but volumes 2 and 3 are devoted to Cook's first voyage. Priced at AU $17,500 (Australian dollars, or roughly $13,361 U.S. dollars).

Next up we have two extremely rare Cook items, far rarer than his official accounts. Ultimately, Cook's third voyage did not end well. Near its conclusion, some of his men became involved in a dispute with natives in Hawaii and Cook was killed in the fight. A fully accurate description of what happened was hard to come by. Cook was already a tremendous hero back home, and in those days, many would have believed that only a heroic death would have been a proper send off. In reality, it was more of a petty dispute and Cook's death was neither notably heroic or unheroic. It just was. Item 15 is a copy of an extremely rare account of Cook's death, but a particularly valuable one as it came from an eyewitness. David Samwell had sailed with Cook on both his second and third voyages. He was an educated man, a surgeon, one who knew Cook well and provided an objective account of his untimely demise. The title of this rare 1786 account is A Narrative of the Death of Captain James Cook... AU $315,000 (US $240,387).

This next very rare Cook item covers a surprising topic: A Catalogue of the Different Specimens of Cloth collected in the three voyages of Captain Cook... The book was created by Alexander Shaw. One of the things brought back from Cook's voyages was an indigenous type of cloth known as tapa cloth. It is produced from the bark of paper mulberry and breadfruit trees, notably in Tahiti and the Hawaiian Islands. The bark is prepared and then pounded with mallets into continuous sheets. Next, dyes created from roots, berries, leaves and flowers are used to create patterns and designs on the cloth. It is amazing what skilled artisans can create from limited resources. The Catalogue contains 56 samples of tapa cloth gathered on Cook's voyages. The book was first issued in 1787. This is the second issue, from 1805-1806. This second issue is rarer and contains more specimens, 56 in all, than the first, particularly additional specimens from Hawaii. £415,000 (US $316,388).

In the 1830s, Charles Darwin sailed on the ship Beagle to South America, where his years of study of natural history led him to one of the greatest discoveries in the history of mankind, the theory of evolution. So, we know what happened to Darwin after the voyage. What ever happened to the Beagle? The answer is she undertook one more circumnavigation and exploratory voyage, this time to Australia. She was captained by John Lort Stokes, who had served in various capacities on the ship since 1824. He was friends with Phillip Parker King, Captain on the South American mission, and Darwin, along with many others. On this last journey, the Beagle's task was to survey the continent's northern coast, the Great Barrier Reef, chart various rivers, and go inland where appropriate. He named what is now the capital city of the Northern Territory "Port Darwin" for his friend from the earlier voyage. The mission lasted until 1843, and in 1846 Stokes published his account, Australian Views North-East Coast. It is one of the rarest of Australian exploration books. Item 6. AU $68,000 (US $51,748).

Here is a look at inland Australia. Not really. Item 31 is The Friend of Australia; or, a Plan for exploring the Interior... by T. J. Maslen, published in 1830. Maslen was a retired officer who had served in India. Here he proposes explorations into the interior, along with describing and illustrating what he expected to find and then develop. He expected the center of the continent would contain fertile land and proposed various Utopian settlements be built on the land. He also speculates about the tribes and flora that will be found, and recommends camels as the best means of transportation. He recommends assimilation of native children into society and even planned for their education. Of course, the land was not as he imagined, so none of this ever happened. AU $9,250 (US $7,034).