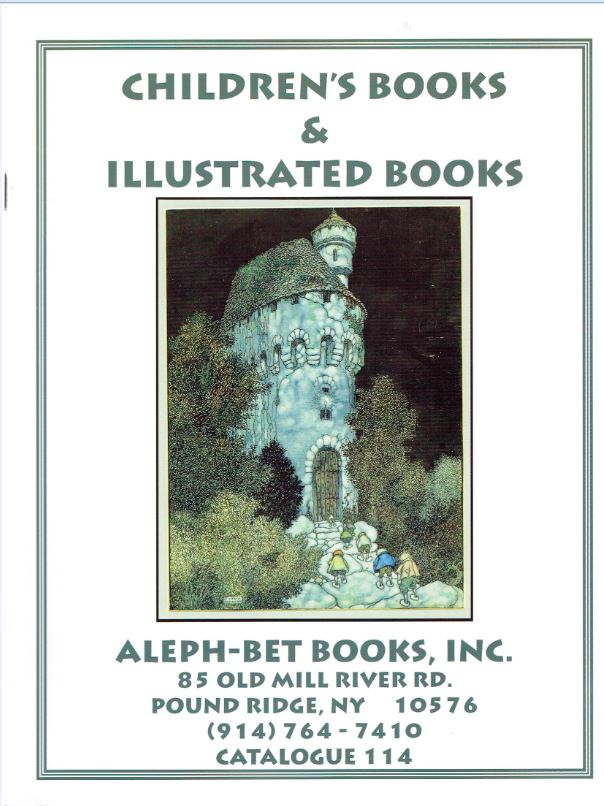 Aleph-Bet Books has issued a new catalogue of Children's Books & Illustrated Books. This is Catalogue 114 in their series. While there may be one or two items that qualify just as children's books or illustrated books, almost everything meets both criteria. These books are for the young, or at least the young at heart. Here are a few.

First up is the first appearance in book form of a legendary figure in children's "literature" – Mickey Mouse. Mickey was "born" in 1928, the featured character in Walt Disney's animated movie shorts. By early 1930, there was a Mickey Mouse comic strip syndicated to newspapers. However, it would not be until the fall of 1930 that Mickey would finally become a literary character, the star of books (albeit comic books). The cover title is the Mickey Mouse Book, inside title Hello Everybody. It contains Mickey's curriculum vitae, also known as the Story of Mickey Mouse, some Mickey songs, including an accompanying arrangement for a ukelele, and a game, which is present in this copy. The colors are green, black and white, and the story was written by Bobette Bibo. She was the publisher's 11-year-old daughter. Disney was in the process of raising funds for his film studio, and this was given away at movie theaters. Some copies featured local advertising, while others have blank spaces where no advertising was placed. This copy is one of the early issues of the first edition. Item 111. Priced at $7,500.

We go to France for this next item. Paul Faucher was an educator turned children's author, who wrote under the name "Père Castor." Among his works are a number of novelty books, and item 336 is an example: Tout Change (everything changes), published in 1934. The book comes with a set blue and red lenses, but these are not used in the familiar way of creating three dimensional images. Rather, each lens allows you to see a different picture on the same page of the book. The pages have separate images in red and blue, so one is filtered out depending on which lens you view the page through. What Faucher has selected is both old technology and new technology for the images, so children can view progress through the lenses. A carriage maker turns into a modern car factory, letter writing becomes the telephone, ballooning becomes airplanes, an old steam locomotive a modern train. $850.

This is a very unusual book considering its time, circa 1910. The title is The Babes in the Wooden Wood, a Tom Thumb Picture Book whose creators are unknown. It is the story of two dolls and their adventures when they run away together. That in itself wouldn't be controversial until you see the dolls, or, as expressed by the text:

"Once on a time, in Dollwell Villa,

They couldn't be taken for sister and brother -

They were not the least bit like one another."

Peter was quite dark and Priscilla quite fair, and two such children running off together would certainly have been a controversial subject in 1910. The author got around this problem by making the two dolls rather than real children. Item 54. $325.

Next up is a panorama book, a fold-out with no text. Based on its nature, Aleph-Bet believes it was published in Britain circa 1944. The title, such as there is, is simply the letter V. The "V" is the sign for victory, and the loser on the other side of the V is Hitler. The book unfolds to ten panels, and each depicts Hitler reacting in shock and fear to that letter. He sees it everywhere. The sausages on his plate, the flowers in his vase, birds in the sky, the crease on a man's trousers, all shape the letter "V." Driven mad, in the last panel Hitler hangs himself, the rope strung to ceiling beams that are shaped like the letter "V." Item 491. $600.

I have never been fond of Dick and Jane, the boring, insipid children who were foisted on generations of young people to teach them how to read. I doubt I would ever have learned to read were I not saved from this pair by Dr. Seuss, just in the nick of time. The doctor provided a cure for boring books. Nonetheless, I can understand the purpose of this pair, their ideal parents, little sister Sally, their cat Puff, and their dog Spot, who liked to run, Spot, run. So, what is this book about? Published in 1962, the title is We Read More Pictures. But, what do we read? It contains no text at all. How can you learn to read from a book with no words? Maybe in the same way you learn to read from a book that puts you to sleep? In looking into this, it appears that the theoretical justification was that for slower learners, they needed more time to prepare for actually reading by using books that contained just pictures. I don't know whether this is a valid theory or was just a way for Scott Foresman to sell more books. Editorial comments notwithstanding, this book will bring back memories of youth to generations of now older people, happy memories like going to the dentist in the days before novocaine. Item 110. $200.