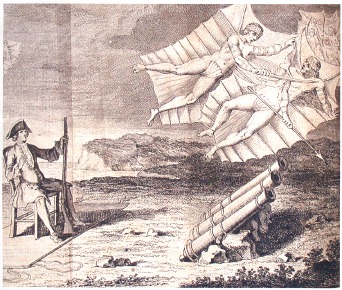 
Item 24 is an interesting Concord, New Hampshire, chapbook from 1843: The Sailor Boy, or the First and Last Voyage of Little Andrew. Andrew sailed from New Hampshire to Tobago, but on his return trip, the ship was wrecked. Not to worry. Little Andrew and his pet parrot and monkey make it back safely. $385 ($285).

Item 14 is Francois Depons' A Voyage to the Eastern Part of Terra Firma, or the Spanish Main, in South America...This is the first English edition of the history of this early 19th century expedition, published in New York in 1806. The focus is on Venezuela, where Depons was stationed on behalf of the French government. But, this work has an extra Americana connection. This English translation, attributed to "a gentleman," was actually the first published work of Washington Irving. $2,250 (US $1,669).

Here is a very unusual travel adventure: The Life and Adventures of Peter Wilkins, a Cornish Man: Relating particularly, his Shipwreck near the South Pole; his Wonderful Passage thro' a Subterraneous Cavern into a kind of New World, his Meeting there with a Gawry or Flying Woman... One suspects that author Robert Paltock did not do a lot of voyaging, but that he had a very good imagination. This is a 1751 first edition of a book that went on to be very popular in its time. Eventually, our hero, Peter Wilkins, saves one of these winged women and marries her. This book sounds perfect for a television series. Item 28. $8,400 (US $6,232).

Item 15 was the book that answered perhaps the greatest of all voyage mysteries. This is the first French edition of Peter Dillon's book, Voyage aux Iles de la Mer Sud, en 1827 et 1828, et Relation de la Decouverte de Sort de La Perouse. La Perouse was a French voyager, who set sail in 1785, and during the next three years made many stops, including South America, Alaska, Russia, and numerous islands in between. In 1787, he received instructions from the French to visit the British settlements in Australia. He had a friendly visit at Botany Bay in early 1788, and then set sail for islands to the west. He was never heard from again. Expeditions were sent to Australia to find him, but none turned up a trace. It was not until forty tears later when British trader Peter Dillon stumbled across a silver sword shown him by some Solomon Islanders that he began to put things together. Dillon would eventually locate more artifacts from Perouse's ships, solving the mystery of what had become of them. This book presented his findings to La Perouse's fellow Frenchmen $3,400 (US $2,522).

Hordern House may be easily reached by those living in the Northern Hemisphere (or elsewhere) online at www.hordern.com. Their phone number is (02) 9356 4411.