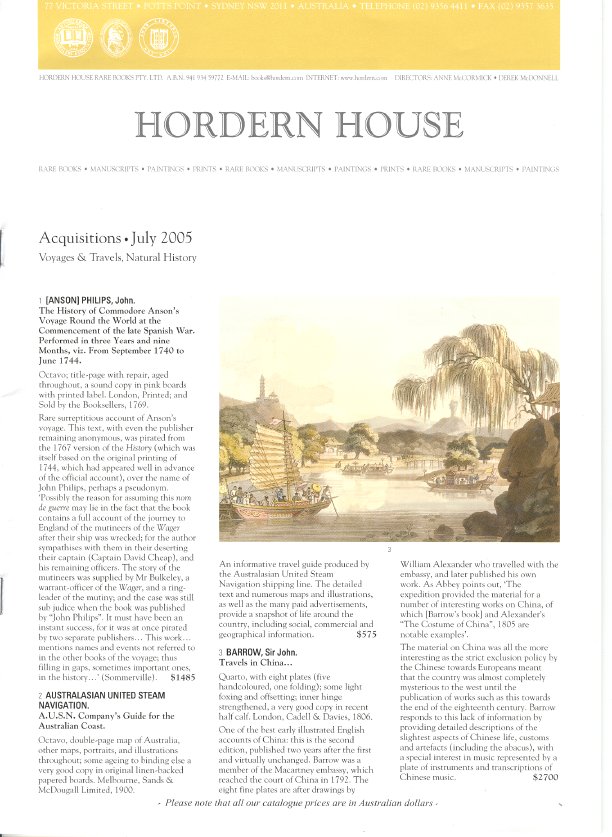 Hordern House has released its catalogue of Acquisitions July 2005 - Voyages and Travels, Natural History. Hordern House is an Australian bookseller, and naturally, they are an excellent resource for those with collections involving that southern continent. However, most of these voyages and travels started elsewhere, and many had stopping points in many other lands, so this is hardly just an Australian catalogue. In fact, there are numerous items of Americana as well as European works, and Australia may be just the right place to find some of these uncommon items. Here are a few of the books you will find at Hordern House.

Hordern describes item 41 as "the last great voyage of Australian coastal discovery." The book is John Lort Stokes' Discoveries in Australia; with an Account of the Coasts and Rivers Explored and Surveyed during the Voyage of H.M.S. Beagle... This is a two-volume set published in London in 1846. Stokes served for 18 years on the Beagle, which spent the years 1837-1843 surveying the northwest coast of Australia, as well as charting rivers and at times serving as base for inland explorations. However, if you seem to recall this ship as being notable for another reason, you are right. Prior to its Australian adventures, the Beagle had journeyed to South America, where its most famous passenger, Charles Darwin, made the observations which would lead to his theory of evolution. Stokes had served with Darwin during those years. Priced at $7,750 Australian (US dollar equivalent of $5,750).

The Wilkes Expedition, which visited Antarctica, Australia, the Hawaiian and Philippine Islands, and the west coast of the U.S., was a an important source of pride for America. Its exploration of the Antarctic, in particular, for the first time showed America capable of launching serious expeditions. The 19-volume official journal of this expedition was prohibitively expensive for most people, but Joseph Clark wrote a history within the reach of average readers, Lights and Shadows of Sailor Life, as exemplified in fifteen years' experience, including the more thrilling events of the U.S. Exploring Expedition... It includes a description of Clark's narrow escape from an attack by Fiji natives which cost two sailors' lives. Item 51 is an 1848 second edition of this scarce narrative. $325 (US $241).

As long as we're on Americana, here is an uncommon California Gold Rush item. It is Journal of a Voyage to California, and Life in the Gold Diggings, and also of a Voyage from California to the Sandwich Island, by Albert Lyman. This 1852 Hartford imprint tells of a trip around the "Horn" in the General Morgan, which was bringing representatives of the Connecticut Mining and Trading Company. However, on their arrival in California, the entire crew deserted, leaving Lyman and his companions to find a new crew. Lyman was not successful in finding gold, but he did get to visit Hawaii, and he tells about this adventure as well. Item 22. $3,750 (US $2,782).