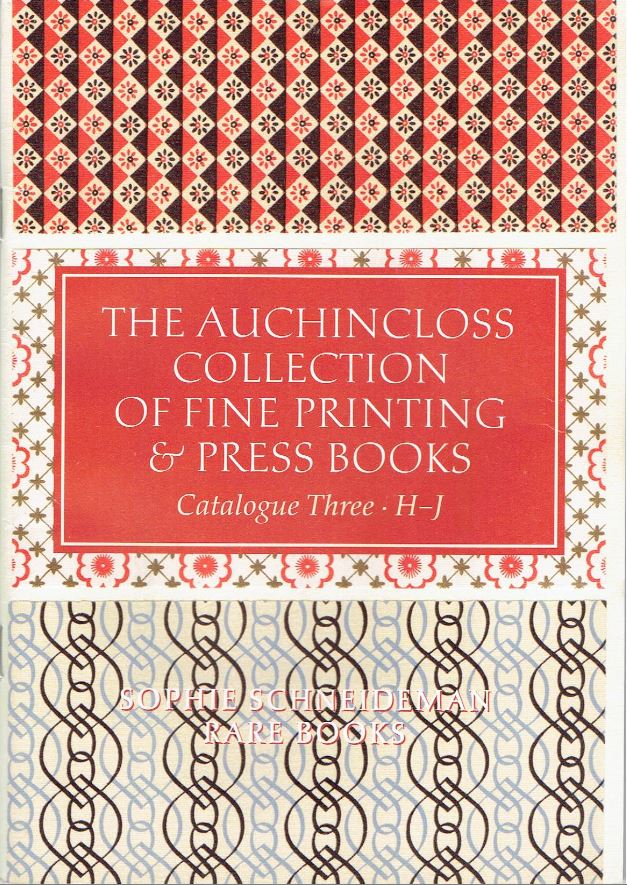 Sophie Schneideman Rare Books has published a catalogue of The Hugh Auchincloss Collection of Fine Printing & Press Books, Catalogue Three – H-J. It contains over 150 items, and is the third selection in the series. It still only takes us through the letter J, giving an indication of the size of his collection.

Hugh Auchincloss was a scion of a distinguished New York family, a distant relative of Jacqueline Kennedy's step-father. He made his career in journalism. For over two decades, he was managing editor of Newsweek. In his spare time, Auchincloss was a collector. He developed an appreciation for fine press books as a young man, and in his adulthood collected them voraciously. The books and ephemera in this catalogue reflect his wide swath, including both well known private presses, and others dating back to the early twentieth century that today are obscure. Mr. Auchincloss died in 2003, with much of his fine collection now available to a new generation of collectors. Here are a few samples.

Victor Hammer had a long and unusually mobile career as a printer. However, he did not start that way. Born in Austria in 1882, he studied architecture, then art. He was an artist, but at the age of 40, he moved to Florence, where he set up a print shop. He also designed typefaces. In 1930, he officially named his press Stamperia del Santuccio, a press he would take with him through the remainder of his career. Hammer moved back to Austria in the 1930's, but after the Nazis took over, he emigrated to America. He was hired by Wells College in upstate New York, where he operated their press. In 1947, he moved to Lexington, Kentucky, and continued his printing career for the remaining twenty years of his life. Artist Fritz Kredel was a German who studied under Hammer while the latter was in Florence. During the late 1930's, like Hammer, he emigrated to America, taking a position at Cooper Union in New York City. He was noted for his woodcuts, used in numerous books, including Eleanor Roosevelt's children's book. Hammer and Kredel remained friends, and Hammer printed several works featuring his woodcuts. Item 17 is one of those, from Hammer's days operating the Wells College Press. The title is The Three-Cornered Hat, by the 19th century Spanish writer Pedro Antonio de Alarcon. It is focused on Alarcon's home region of Andalusia in southern Spain. This book, published in 1944, contains 21 woodcuts created by Fritz Kredel. Priced at £150 (British pounds, or approximately $198 U.S. dollars).

Next up, we have a work from the Hammer Creek Press, which was not one of those run by Victor Hammer. Instead, it was operated by John Fass. Fass designed limited edition books for major publishers, but then did fine press work on his own. The Hammer Creek Press was named for a creek near his boyhood home in Pennsylvania, but that is not where his printing press was located. Rather, it was in his one-room apartment at the Bronx YMCA. It must have been cozy. It did encourage the printing of more short form material. Item 46 is an example. It is the 1950 Harbor Press edition of Lincoln's Gettysburg Address. We all know how short that was. Fass wisely did not print Edward Everett's Gettysburg speech of the same day that went on for almost two hours. This printing features type ornaments printed in gold and blue. £100 ($132).

Here is another work from John Fass' Hammer Creek Press, and a great rarity. This one is an example of nature printing, a form of printing that had a brief run in the middle of the 19th century, but is otherwise uncommon. It is when printing is done directly from an object, usually one from nature, rather than from something like a woodcut or engraving of the object. This example could be described as a leaf book for two reasons. For one, its leaves are loose, rather than bound together. Secondly, the images are of leaves, not the page type of leaf, but those from a tree. The title is Various shaped leaves of the Mulberry Tree. Fass printed directly from leaves of a mulberry tree. There are 16 leaves of leaves, along with a title page and a preface. Printed in 1960. Item 77. £1,000 (US $1,320).

This is a book that was produced on behalf of a book collectors' club. The title is Don't Nobody Care About Zeds. Can you guess which book club it was printed for? Of course, it was printed for the Zamorano Club of California. They care about Zeds. The printer was Richard Hoffman, who operated his own press while also a professor at the University of California. He said he enjoyed the opportunity to highlight this often overlooked letter of the alphabet. Item 107. £80 (US $105).

Auchincloss had a large selection of books from the Incline Press, one of the most notable of currently active fines presses. Item 134 is book about a specific book art: Harvesting Colour. The Year in a Marbler's Workshop, published in 1999. It is the work of marbling artist Ann Muir, and contains 12 samples of her work. Ms. Muir added some sketches of cats, and has signed this copy, number 46 of 250. £450 (US $593).