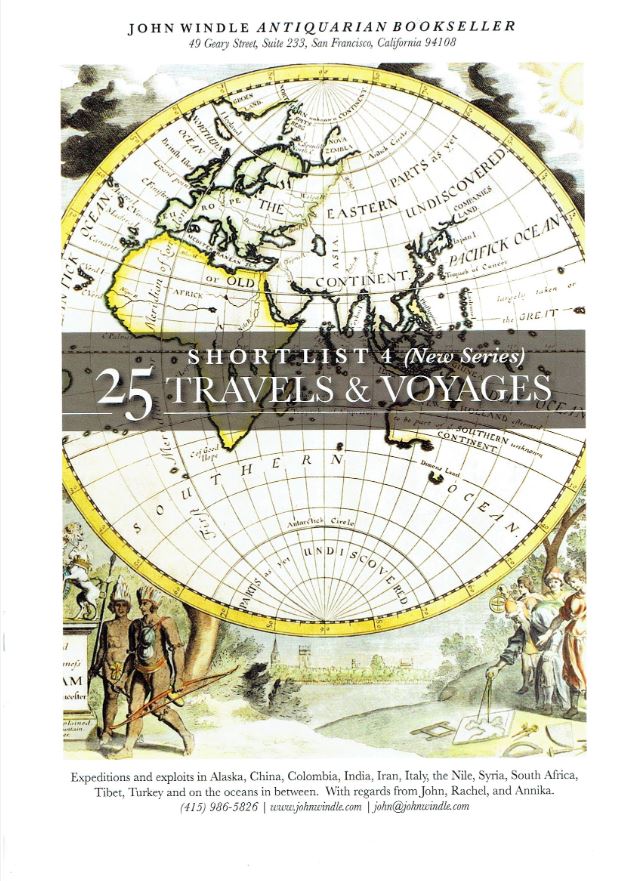 John Windle Antiquarian Bookseller has released his Short List 4. 25 Travels & Voyages. It is described as containing, "Expeditions and exploits in Alaska, China, Colombia, India, Iran, Syria, South Africa, Tibet, Turkey and on the oceans in between." Around the world in 25 items. Here are a few of the travel books that are available.

Captain William Bligh has something of a tarnished reputation, though it likely is mostly unfair. He was captain of the Bounty when the most famous mutiny at sea occurred. The mutineers claimed harsh treatment, but Bligh was fairly typical of ship captains of his day, and the mutineers were likely more interested in enjoying the pleasures of Tahiti then continuing on their assigned journey. Bligh and his loyal crew were put to sea on a 23-foot boat while the others sailed off into the sunset. It was then that Bligh captained one of the most amazing journeys in the annals of history. With no compass or chart and few provisions, he led his 18 loyal sailors on a 3,600-mile journey across the ocean, to rescue in the Dutch East Indies. When Bligh made it back to England, he wrote this book – A Narrative of the Mutiny, on board his Majesty's Ship Bounty... published in 1790. He recounts both the mutiny and the amazing subsequent voyage. Bligh's reputation was on the line when he made it home, necessitating his quickly telling the story from his point of view. He followed up with a more detailed account two years later, but this is his first report of the events at sea. Item 3. Priced at $9,750.

As bad as was the mutiny on the Bounty, the one on the Globe was even worse. The Globe was a Nantucket whaler, with a young captain, sent to cruise waters off of Japan. The ship arrived in Hawaii in late 1823. Six of the crew abandoned ship, requiring the hiring of new sailors. Samuel Comstock, a harpooner on the ship, convinced several new arrivals to join him. However, he did not put the captain and loyal officers off on a longboat to fend for themselves. Instead, he and his accomplices snuck into the captain's quarters at night with an axe, killing the captain and three others. Sailors not participating in the mutiny were forced to comply with their orders. However, these mutineers did not trust each other. They thought one of their cohorts was planning to take control of the ship so they hung him. After landing on Mili Atoll, the mutineers became suspicious of Comstock. They shot him. They were next forced out of Mili Atoll and moved on to the Mulgrave Islands. Once there, six of those who did not participate in the mutiny were able to sneak on the Globe, cut her loose, and make the long voyage to Valparaiso, Chile, where they informed the American consul. A rescue ship was sent, but by the time it arrived, hostile natives had killed the mutineers and all but two of the crew. Those two, William Lay and Cyrus Hussey, wrote this account, published in 1828: A Narrative of the Mutiny on Board the Ship Globe... And the journal of residence of two years on the Mulgrave Islands... Item 14. $1,000.

Mary Wollstonecraft is best remembered today for a pioneering book on women's rights she published in 1792, Vindication of the Rights of Woman. Arguing for women's rights was not the best way to win a popularity contest in the male-dominated world of 1792, but Mary was no shrinking violet. She lived as she pleased. She is also indirectly associated with an even more famous book today – Frankenstein. It was written by her daughter. During her lifetime, Wollstonecraft's most popular book was Letters Written During a Short Residence in Sweden, Norway, and Denmark, published in 1796. She visited the northern reaches of Europe, a place she found to be strikingly beautiful, and wrote about it. Her descriptions, poetic and personal, were said to be very influential on the Romantic Poets, such as Wordsworth and Coleridge, just beginning their writing in this time. Item 25. $2,500.

Item 7 is a first edition of the official account of Cook's second voyage, by Captain James Cook. A Voyage to the South Pole and Around the World was published in 1777. This was Cook's southernmost route of his three journeys. At the time, most people believed there was a massive continent surrounding the South Pole. Cook did not find it, though not for want of trying. He traveled farther south than anyone before him, including being the first to penetrate the Antarctic circle. He even circumnavigated the globe from far south. Still no continent. In his failure to find land he disproved the ancient belief – that such a continent existed. Had he gone a bit farther, he would have found Antarctica, but that is hardly the massive continent long imagined. $3,500.

Cook sure proved this novel to be a fake: The History of the Severambians: A People of the South Continent... by Captain Siden. Not really. Captain Siden was a fictional visitor to this non-existent land, the author actually being French writer Denis Vairasse D'Allais. This is a 1738 edition of a book first published in 1675. It is a Utopian novel set in the imaginary southern continent. He tells about their history, customs, laws, and religion, effectively expressing his opinions about the lands of the real world. A somewhat similar book, Gulliver's Travels, is well known today, but Vairasse's book was not a copy, preceding Swift's better known work by almost half a century. Item 17. $2,500.

John Windle Antiquarian Bookseller may be reached at 415-986-5826 or john@johnwindle.com. Their website is www.johnwindle.com