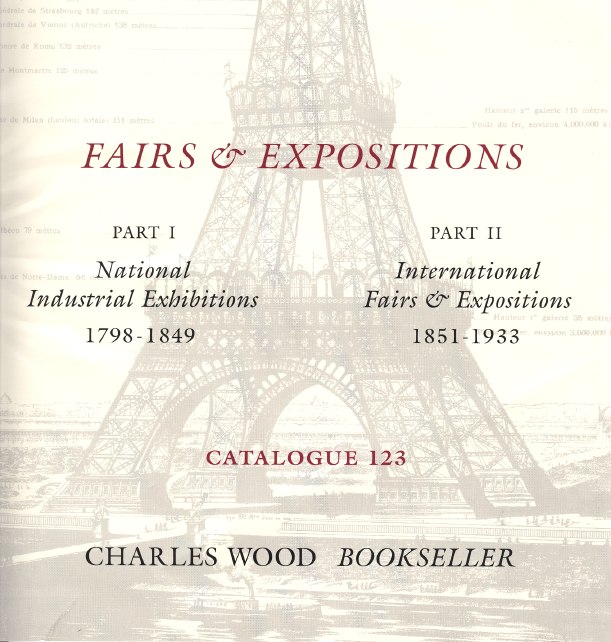 Charles Wood Antiquarian Booksellers has issued a catalogue of Fairs and Expositions. Wood catalogues generally focus on a particular subject, often a very targeted niche, but then provide an amazing collection of items within the area. This well describes Catalogue 123. It is a collection of publications from various national and world fairs, from the 1798 Paris Industrial Exposition to the 1933 Chicago Century of Progress Exposition.

The first serious French industrial exhibition took place in 1798. The exhibition was located in a Paris hotel, and displays included furniture, tapestry, bookbinding, clocks, art, carpets, silk, porcelain and more. Altogether there were 110 exhibitors, and this became the first of a series of exhibitions that would continue for half a century. Item 1 is a catalogue from it, Exposition Publique Des Products de L'Industrie, and participants soon learned that it could be an effective advertising vehicle. One quaint oddity is that the cover dates it from the year 6. It isn't really that old. It was from the sixth year after the French Revolution, also known as 1798. Priced at $4,500.

In 1825, the Franklin Institute of Pennsylvania for the Promotion of Mechanic Arts published its First annual report... This report included a catalogue of the exhibition they held in 1824. Among the categories displayed were iron and copper works, chemicals, machines, glass, cotton and woolen goods, paints, musical instruments, and straw bonnets. Names of manufacturers and prices are provided. Item 16. $350.

In 1851, the British held a major international exhibition to celebrate the technological advances of the era. A behemoth structure of iron and glass, known as the Crystal Palace, was built to house the exposition. It was a huge success, with over 6 million people viewing over 13,000 exhibits. When the exposition was over, the Crystal Palace was taken down and then reassembled on new grounds, where it stood until destroyed by fire in 1936. One of the most important fair books is the official report on the competitions which took place at the fair: Exhibitions of the Works of Industry of All Nations. Item 35. $750.

Item 36 is a Washington printing pertaining to the London fair. It is the Proceedings of the Central Committee of the United States in the Industrial Exhibition of 1851. This is a rare 1850 pamphlet encouraging U.S. participation in the event and offers useful guidance. $200.