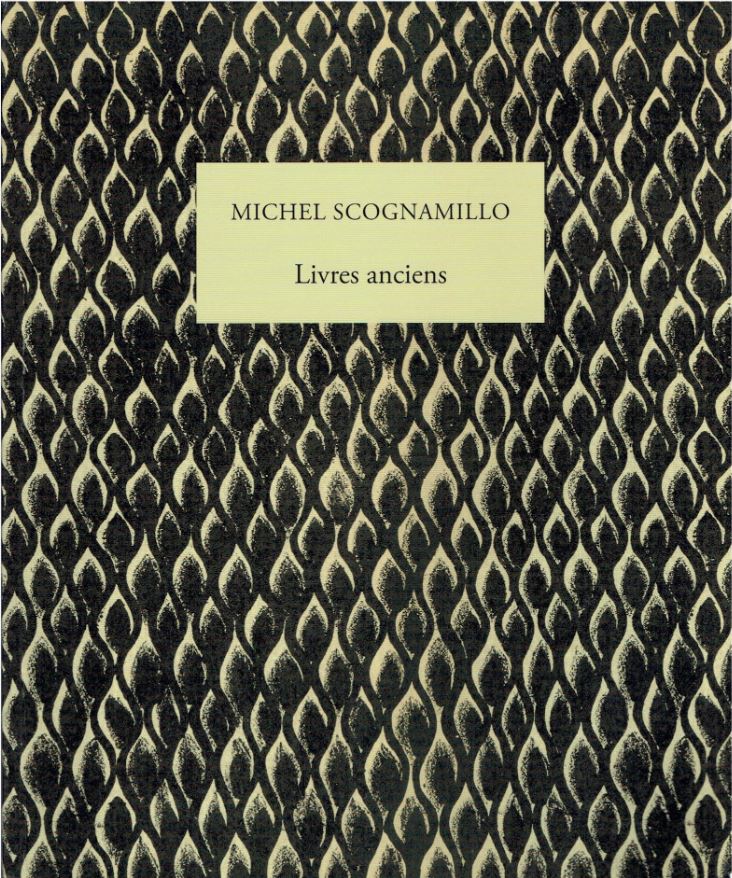 The first catalogue from Michel Scognamillo.

Michel Scognamillo Livres Ancien et Modernes has issued their first catalogue, Un Choix de Livres – Précieux ou Curieux. That translates to "a choice of books – valuable or uncommon." Obviously, this catalogue is written in French. Not surprisingly, many of the books are written in French as well. However, others are not. The "anciens" part of the books are often in Latin. Many are seriously anciens, dating as far back as the 15th century. There are also some books in English, and if that is insufficient for English collectors, there are several more that will appeal to those who collect English writers or French books – French editions of books written by English or American authors.

It is hard to place these books into a specific category, as variety is inevitable when such a wide date range is represented. The items appear in chronological order and date from 1492 until 1966. The topics of typical books evolved over five centuries. Fortunately, M. Scagnamillo is a noted expert in the book trade, so the selections are universally significant and desirable even as subjects change.

Before describing a few samples, I need to acknowledge a personal shortcoming in this review. The catalogue is entirely in French, and my familiarity with the language is limited to high school instruction half a century ago. Even then, I was a mediocre student. My intentions here are good, but my skills are sorely wanting. I cannot guarantee perfection in descriptions.

We will begin with one of those works which bridge English and French collectors. The book, actually a one-act play, is written in French: Salomé. Drame en un acte. Nevertheless, the author is the English-speaking (though Irish) writer Oscar Wilde. Wilde would have several occasions to prefer things French to those English, spending his last few years in France in self-imposed exile after having been imprisoned in England. However, this play was written much earlier, and this first edition was written in French for a different reason. The drama is loosely based on a New Testament story, and as such was proscribed from performances in England, where it was illegal to put on a play based on biblical characters. So, Wilde responded by writing the play in French. As such, this is the true first edition, not a first translated one. Item 48 is one of only 50 copies of the 1893 first edition on handmade paper and contains a most interesting inscription and provenance. It was inscribed from Paris in the year of publication to Madame Arman de Caillavet. Born Léontine Lippmann, she married Albert Arman, though she is less remembered for her marriage than her long-running affair with author Anatole France. Mme Arman de Caillavet was noted for her salon in Paris, and many if not all of the great French authors and visiting writers of the day made their appearances at her home. That included Wilde. Priced at €55,000 (euros, or approximately $60,973 U.S. dollars).

Next up is one of the great masterpieces of French literature, Les Trois Mousquetaires (Three Musketeers), by Alexandre Dumas. This is a lengthy novel, eight volumes in this 1844 first edition. It is a work of historical fiction, set in the 17th century, the time of the powerful Cardinal Richelieu, one of the historical figures who makes his appearances. It is based on the memoirs of Charles d'Artagnan and the three musketeers he befriended, but while d'Artagnan was real, these memoirs are fictional. The condition of this set is described as exceptional. Item 30. €100,000 (US $110,860).

In the days before much understanding of psychological issues and the existence of psychiatric help, Robert Burton recognized an issue still common today, even if his comprehension of it was limited. Item 9 is The Anatomy of Melancholy What it is, With all kindes, causes, symptomes, prognostickes and severall cures of it..., a first edition published in 1621. What Burton called "melancholy" is what today we would refer to as depression. Burton suffered from it, and so did many of his contemporaries and later generations, as attested by his book running through over 70 editions. Burton did not know the cause, nor much of a cure, but he sympathized with fellow sufferers, and compiled what advice was known in his day to at least provide some comfort. Burton found distraction to be helpful, advising his readers to keep busy with other activities. He also recommended traveling to places where melancholy was not so prevalent. If not the most modern advice, this book is still recognized for its great importance as a precursor to psychiatry. €25,000 (US $27,715).

Here is a man whose name has become sort of a term of endearment more than a proper name. Item 28 is a biography of Casanova, the real person. Giacomo Casanova was an 18th century native of Venice, a diplomat, though he did spend much of his life in France. He was a hopeless romantic. He seduced countless women along the way, charm being his method of conquest. These were not bar pick-ups, but elaborate productions. He would generally find a woman somewhat vulnerable, romance her, treat her with great respect, perhaps help financially, and eventually so charm and indebt her she could not resist. When he tired of the relationship, Casanova would assure the lady he was unworthy of her and help find a more suitable man for her station. Those interested in learning how one accomplishes such a reputation can read his memoirs, Memoires de J. Casanova... 12 volumes published from 1826-1838. Item 28. €25,000 (US $27,715).