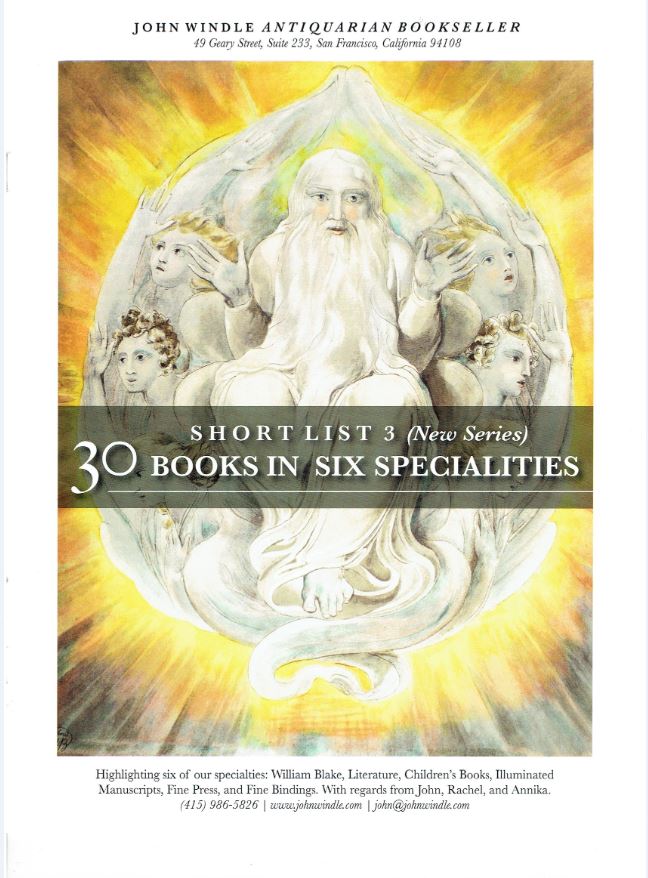 John Windle Antiquarian Bookseller has issued Short List 3. 30 Books in Six Specialties. Those six specialties are William Blake, Literature, Children's Books, Illuminated Manuscripts, Fine Press, and Fine Bindings. We must acknowledge that Windle is fair and balanced. There are five representatives from each of the six categories. Here are a few samples of them.

We begin with one from the category of literature. Item 7 is James Boswell's The Life of Samuel Johnson, a first edition, first issue published in 1791. Boswell is remembered as one of the greatest biographers ever. Johnson is remembered because he was a friend of and admired by Boswell, one of the greatest biographers ever. Johnson was an important lexicographer. His 18th century dictionary was the finest up to its time. Obviously, he had a way with words. Still, it wasn't his lexicography wordsmithing that so impressed Boswell. Johnson was also a great conversationalist and wit, and this is what led Boswell to be such an admirer, and one who listened to his every word, and recorded most of them. Boswell met Johnson in 1763, and wrote down much of what he said until he died in 1784. Priced at $3,750.

Next up is a children's book, though it obviously has some adult fans. Item 11 is the Boston classic, Make Way for Ducklings by Robert McCloskey, published in 1941. It is the story of Mrs. Mallard and her eight young children who have to make their way from the Charles River to Boston Public Garden. Unfortunately, they are too young to fly. They need to make their trip through traffic and various obstacles. Fortunately, the police and citizens of Boston are there to protect them on their journey. Along with statues of various patriots to be found in Boston, hotbed of America's revolution, there is one in the Garden of Mrs. Mallard and her ducklings. As to that comment about this book appealing to some adults as well, this copy contains the signed bookplate of Subrahmanyan Chandrasekhar, along with a loosely inserted card from him. Subrahmanyan Chandrasekhar was an astrophysicist who won the Nobel prize for physics in 1983. It had something to do with black holes, not baby ducks. $12,500.

Item 19 is an illuminated leaf on vellum from a Book of Hours, circa 1430, from Brittany. It contains six illuminated initials, in gold and other colors, and two large miniatures (no, that is not an oxymoron). The image on the recto shows St. Nicholas blessing three boys in a pickling tub. This is not the St. Nicholas of "A Visit from..." but the 4th century saint. Nicholas was a church father with his serious, theological side, but was also said to be a giver of presents and a favorite of children. Legends grew about him, including one where he was said to have restored life to three children who had been killed by a butcher and tossed into a pickling tub. The miniature on the verso depicts St. Sebastian, about to be shot by two archers. St. Sebastian is usually depicted this way, but the story is he survived this attempted execution and went back to the Roman Emperor to protest the persecution of Christians, whereupon he was clubbed to death. The miracle attributed to Sebastian later was one of saving many people from the plague. $9,500.

Next is another leaf, but this time within a fine press book. Item 21 is Great Polyglot Bibles, Including a Leaf from the Complutensian of Acala, 1514-1517... For the occasional person not familiar with the term "complutensian," it means pertaining to Complutum, the Latin name for the city of Alcala de Henares, a city in Spain. A polyglot bible, or polyglot anything else, is one using several languages. The Complutensian Bible could justly have been called a poly-polyglot bible as it used four – Hebrew, Greek, Latin, and Armaic. That certainly would have covered all necessary languages for biblical scholarship in the 16th century. The text in the four languages is shown on each page in four columns, which Windle describes as "one of the greatest feats of typography." The Allen Press book containing this leaf, published in 1966, includes a scholarly biblical essay by Basil Hall. It was published on behalf of the Book Club of California. The Allen Press of Lewis and Dorothy Allen was in operation in the San Francisco area from 1939 until the 1990's. $550.