Indonesia and the Dutch East Indies From Gert Jan Bestebreurtje 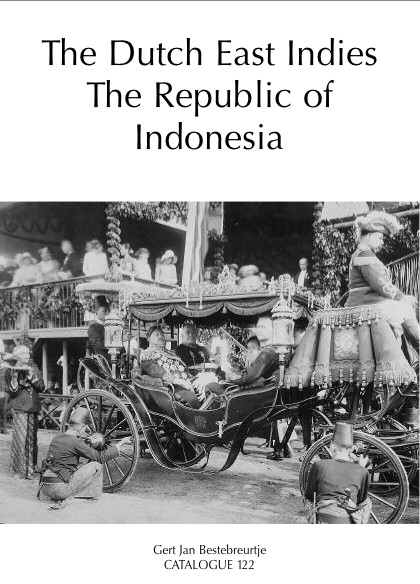 Indonesia and the Dutch East Indies From Gert Jan Bestebreurtje

This is our first review of a catalogue from Gert Jan Bestebreurtje, Antiquarian Bookseller. Bestebreurtje is a Dutch bookseller, and they are offering a massive collection in their catalogue 122, entitled The Dutch East Indies, The Republic of Indonesia. A total of 1,373 items are offered for sale.

First, a bit of geography and history for those not particularly familiar with Indonesia and its past. Indonesia is a federation of many islands located between the continents of Asia and Australia, straddling the border between the Indian and Pacific Oceans. While an independent nation for over half a century, there are still rivalries and even occasional violent confrontations between some of the peoples who inhabit these islands. Like many of today's nations, particularly in Africa, it was created not so much from natural borders as from its colonial past. For several centuries, these islands were colonies ruled by the Netherlands. This is why so much material about their history can be found thousands of miles away in the possession of a Dutch bookseller.

Portugal had been the first nation to gain influence in the area, but by the 17th century, the Dutch had made major inroads. Early in that century, the Dutch East India Company was formed, and this quasi-governmental corporation one by one came to control the various islands through the course of the 1600s. In effect, it became their government, though the Company was more interested in trade than rule.

The Dutch East India Company ruled the islands with an iron hand, not unwilling to use violence to enforce its will. However, by the end of the 18th century, the company was bankrupt, and the Dutch lost control to the British during the Napoleonic Wars. Once that period ended, the Dutch regained control, and ruled the area until their nation fell to Germany during the Second World War. The islands were briefly controlled by the Japanese during the war, but once Japan fell, the Dutch attempted to regain control. It was not to be. Independence movements were sweeping the old colonial empires. The Dutch were able to seize the capital at Batavia (now Jakarta) and assert their authority, but the costs were high and long-term prospects dim. In 1949, they ceded control to an indigenous government, and the independent nation of Indonesia was born.

Roughly half the works in this catalogue pertain to what is now Indonesia in general, while the other half pertain to specific islands. Not surprisingly, most of the books offered are in the Dutch language. However, there are many in English and French, and descriptions are provided in English, a great help for those of us who do not read Dutch. Here are a few items that are being offered.

Item 90 is A new and accurate map of the East India Islands. Laid down according to the latest discoveries. Those "latest" discoveries were as of 1752. This London map includes not only the Dutch East Indies, but the Southeast Asian nations of Cambodia, Thailand, parts of China and the Philippines as well. The map has been colored by hand and includes a cartouche of natives holding parasols. Priced at EU675 (Euros, or US dollar equivalent of US $824).