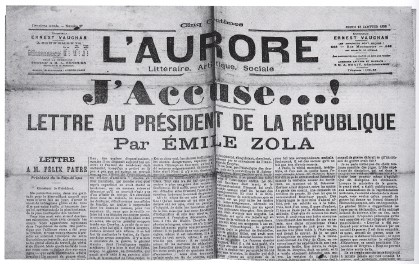 
What did Catlin learn from all of his years among the Indians? Here's the answer: Shut Your Mouth and Save Your Life, by George Catlin. This book has nothing to do with keeping secrets. It relates the author's conclusion that people who breathe through their nose are healthier than those who breathe through their mouth. His explanation was that nasal breathing strained and warmed the air breathed, thereby reducing damage to the lungs. He believed that certain Indians fared better against childhood diseases as they prevented their children from breathing through the mouth. Item 33 is an 1870 fourth edition of this book originally published under the title "The Breath of Life..." $500.

Item 157 may well be the most important polemical newspaper article ever written. From the January 13, 1898 French newspaper L'Aurore, it is an open letter to the French President from writer Emile Zola, headlined "J'Accuse..." (I Accuse). Zola was uncovering a terrible injustice and cover-up by the French Army. Captain Alfred Dreyfus had been arrested and convicted for treasonous acts despite his innocence. As a Jewish officer, he was an easy target at a time when anti-Semitism was rampant. Dreyfus was convicted on the basis of "incriminating" documents which were neither introduced at trial nor shown to the defendant. Whatever belief in his guilt may have been held at the time of trial, it quickly became evident that Dreyfus was not guilty, and the guilty party was instead one Major Esterhazy. However, instead of correcting the injustice, the Army engaged in a massive cover-up. Zola's article came shortly after Esterhazy was acquitted of the crimes he committed. Eventually, Dreyfus would be granted a new trial, where, amazingly, he would be convicted again. However, he was quickly pardoned, and finally, seven years later, his conviction was overturned and Dreyfus was awarded the Legion of Honor. Zola, too, would be convicted as a result of this affair, for libel, and sentenced to a year in prison. He would go into exile in England, returning a year later when his conviction was dismissed. The Dreyfus Affair remains a seminal event in French history, a great injustice that thankfully the French had the good sense to reverse. The four-page edition of L'Aurore is priced at $10,000.

The mutiny on the Bounty remains the most famous of naval mutinies, and Captain William Bligh's 1790 account is the most important account. However, it wasn't the first. Earlier in that year, this rare book was published: An account of the mutinous seizure of the Bounty; with the succeeding hardships of the crew. To which are added secret anecdotes of the Otaheitean females. This book, taken from various newspaper accounts and hearsay, was actually the first book about the mutiny. As for the Otaheitean females, Otaheite is a Pacific island, and some of the mutineers, living in exile, eventually took some of these women for wives. Item 19. $17,500.

J.N. Bartfield Fine Books may be found online at www.bartfield.com or reached by telephone at 212-245-8890.