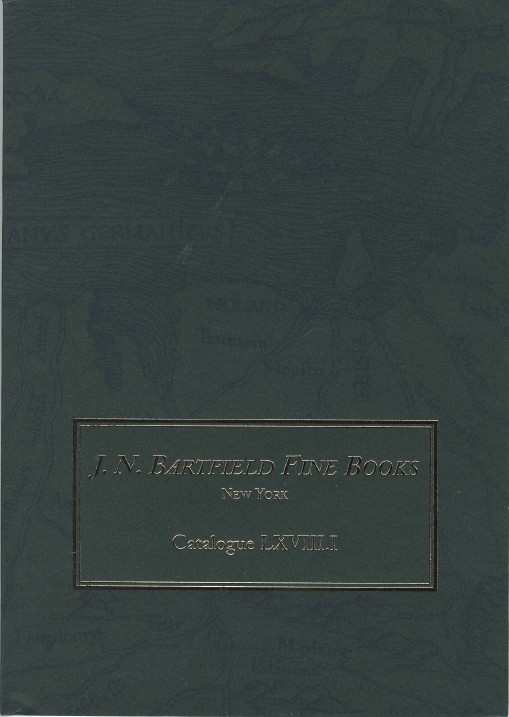 This month we review our first catalogue from J.N. Bartfield Fine Books, though it is hardly the first for this bookseller established in 1937. J.N. Bartfield is located on 57th Street in New York, as they have been for 68 years. They offer books in many fields: travels and voyages, literature, Americana, sporting books, children's books, as well as fine printings and color-plate books. What Bartfield's collections do have in common is importance. There are no ordinary books in their catalogue, as you shall see.

Item 8 is A Voyage Round the World in the Years...[1740-1744]...by George Anson... Anson had already commanded numerous ships for the British at the time, protecting their shipping interests along the Carolina coast and other places. A less polite term for Anson was privateer, as the British officer gladly attacked and pillaged Spanish and French ships. His successes brought him rapid advancement in the British Navy. The four-year trip recounted in this book was filled with tragedy. Setting out with six ships in 1740, they returned four years later with but one. Almost two-thirds of his force perished along the way, most to disease, primarily scurvy. Others would be lost to shipwrecks as they rounded Cape Horn. Still, Anson would have one major looting success of a Spanish ship, the goods from which he would sell in China, before returning home a wealthy man. His success would result in his being promoted to Rear Admiral, and further promotions came after a successful sea battle against the French in 1747. By 1760, two years before his death, Anson was appointed Admiral of the Fleet. This 1748 account of Anson's most notable voyage is priced at $6,850.

An interesting title comes from one of Anson's crewmen, Alexander Campbell: The Sequel to Bulkeley and Cummin's Voyage to the South-Seas... Campbell served on one of Anson's ships, the Wager, which was grounded while they were attempting to round Cape Horn. Campbell had been left on an island, captured by Indians, and brought to Spanish territory in South America. This book was written by Campbell to justify his actions after being accused of aiding the Spanish Navy. This book was suppressed after its 1747 publication, making it scarce today. Item 30. $9,500.

George Catlin's illustrated "Portfolio of North American Indians," originally published in 1844, is one of the greatest resources we have on the Plains Indians prior to their lives being totally transformed by the white man. Here are a couple of uncommon works associated with this great portfolio. Item 31 is Catlin's notes of eight years' travel and residence in Europe, with his North American Indian collection. Published in 1848, it recounts Catlin's traveling exhibition, which toured many major European cities during the 1840s. Catlin's exhibitions not only included his paintings, but several actual Indians, who must have found Europeans as strange as they found them. Item 31. $475. Item 32 is an 1865 promotional piece for Catlin's "North American Indians." This prospectus includes 48 pages of text from Catlin's work along with 16 engravings.