As American as Apple Pie:Censorship in the U.S. 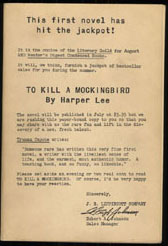 As American as Apple Pie:Censorship in the U.S.

What can be more truly American than the right to free speech and a free press? At least, this is the credo that most of us grew up with. Yet in America there is also a long history of censorship of print, of art, and of ideas that is thoroughly and excellently explored in an online exhibition hosted by the Special Collections Library at the University of Virginia entitled: “Censored: Wielding the Red Pen” (www.lib.virginia.edu/speccol/exhibits/censored).

The exhibition begins with an introduction entitled “What is Your Definition of ‘Censorship’?” which reads as follows:

Books, films, music, and works of art have been suppressed, altered, expurgated, bleeped, blackened, cut, burned, or bowdlerized. Writers and artists have been imprisoned, fined, fired, or silenced. Wearing many masks, censorship has appeared in our living rooms under the names "national security," "classification," and "selective inclusion." Books have been removed from shelves or never been published at all. Artistic visions have been circumscribed or lost. Scientific and official state documents, positing objectivity, have not remained immune from the red pen. Cloaked in the voice of authority, they have advanced particular viewpoints and biases to the extent that other voices have been silenced. In a context where the Bible has been censored, dictionaries edited, and histories rewritten, we have all been affected on a daily level. Even in the new millennium, we confront the censorship debate. On computer screens throughout the world, questions regarding access to information on the Internet are defining the next battleground for the debate about freedom of speech. This exhibition hopes not so much to judge censors and censorship but instead to provoke questions. Every day some form of censorship occurs in the United States. This prevalence of the red pen in a country founded on the Bill of Rights suggests that most people consider some things or ideas too dangerous or offensive to be made widely available. Is there a line in the sand? And if so, where do you stand? Where are your limits of tolerance? As you move through the exhibition, we invite you to consider whether or not there are restrictions which you might impose on the First Amendment. Are there situations in which you might support the suppression of materials or ideas? Note, also, the silence which accompanies your journey through the exhibition, a poignant reminder of the voices suppressed through the ages.