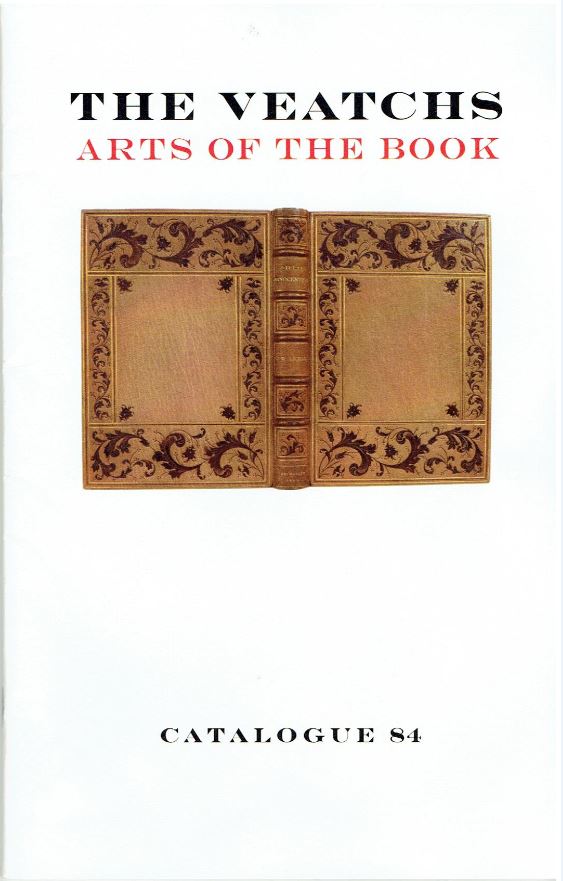 The Veatchs Arts of the Book has issued Catalogue 84 Spring 2016. It features books that are works of art. Fine bindings, handmade paper, artistic drawings, high quality printing, specially designed typefaces, are among the attributes of these books. Representatives of the book arts are always the hardest to describe. A picture may be worth a thousand words, but a thousand words can't do justice to an item of beauty. Nevertheless, we will attempt to describe a few samples of what is available as best we can.

Leonard Baskin was a sculptor, artist, engraver, printer, writer, and undoubtedly several more talents that could be full time careers by themselves. Probably Baskin's most viewed work is the relief funeral cortege at the Franklin Roosevelt Memorial in Washington. Still, while being a noted sculptor, Baskin operated a private press for many year, the Gehenna Press. From that press comes item 5, Nature's Mould. Etchings & Text by Leonard Baskin, published in 1997. The text describes the process of nature casting in the 16th century. It describes practitioners who used molds to cast various natural items in ceramic, silver, and bronze. It is followed by 26 plates of etchings, mostly in color. Baskin's images include crabs, frogs, sea urchins, spiders, and lizards. Even if those creatures don't immediately strike you as having great potential for works of art, you may be surprised by what Baskin accomplishes. Offered is number 11 of 26 copies of Baskin's work signed by the author/artist (each engraving is numbered and signed). The book is accompanied by the four-page prospectus which contains two etchings. Priced at $12,500.

This next item was described by John Bidwell as "….the first American-made deluxe book to be manufactured on a cost-is-no-object basis." Its $20 price tag would not be particularly cheap today, but in 1807, when it was published, it would have been at least several weeks wages for most people. The book is The Columbiad, by Joel Barlow. It is an epic poem, a concept more popular in its time than it is today. It is a philosophical and historical poetic treatment of America, soaring rhetoric with comparisons to archaic events and personages only the most educated could understand. If considered a bit grandiose 200 years ago, the poem receives little respect today, considered more ponderous and pretentious than great writing. Fortunately, this is a catalogue of beautiful books, rather than beautiful text. The poem is dedicated to Robert Fulton, of steamboat fame. Fulton was a close friend of Barlow who helped oversee the book's production as well as funding its printing. Item 4. $600.

By the end of the century, the book arts had taken another great leap forward. No catalogue about the field is really complete without something from the most notable of fine, private press printers, William Morris' Kelmscott Press. This was the press' first octavo book, published in 1892: Biblia Innocentium:

being the Story of God's Chosen People before the Coming of Our Lord Jesus Christ upon Earth... One of 200 copies printed on handmade paper, it was bound by Zaehnsdorf in 1900. The book is unillustrated, though that was not Morris' original intention. It was to carry 200 drawings by Morris' friend Edward Burne-Jones, but the artist only completed 25. Morris and Burne-Jones would team up again four years later to produce the illustrated Kelmscott Chaucer, the Press' most famous work. Item 48. $9,700.

For those who appreciate wood engravings, it doesn't get much better than this. Item 3 is Endgrain. Contemporary Wood Engraving in North America. Published by the Barbarian Press in 1994 (actually 1995), it contains engravings printed from wooden blocks from over 120 wood engravers in the U.S. and Canada. Each engraving is printed in black with the artist's name, the title, and date printed below in blue. This is #16 of 50 copies in full leather. It contains the signed frontis engraving by Rosemary Kilbourn. $2,500.

For those with a technical orientation, item 25 is Modern Power Generators. Steam, Electric, and Internal-Combustion. These are no longer quite so modern, the book being dated 1908, but this was a time of huge technological breakthrough. It contains die-cut models of engines with varied layers and movable parts. This came out at the time of the birth of the automobile, and among the movable models is one for an electric car. They didn't quite catch on...then. Now they are quickly becoming the rage. How many back orders are there for Teslas? Maybe this book is still modern after all. $400.