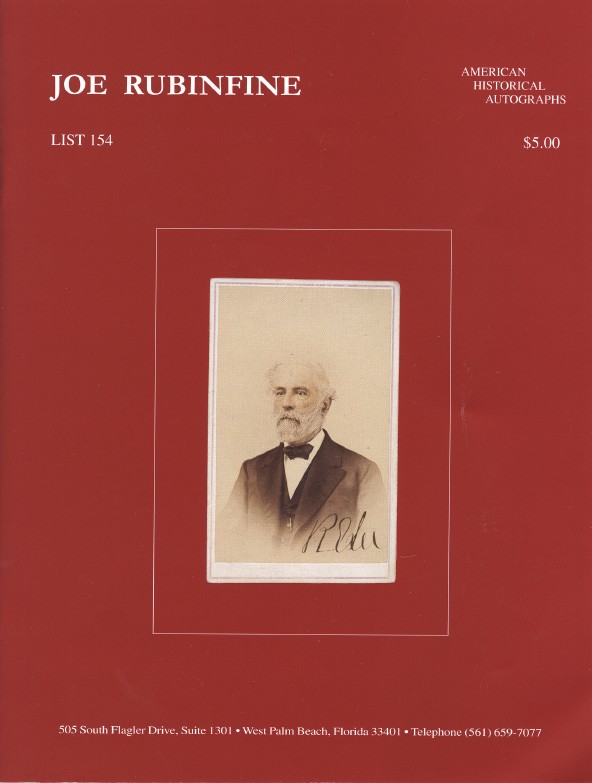 Joe Rubinfine has issued his List 154 of American Historical Autographs. They range from a colonial appointment in 1671 to a signed copy of Douglas MacArthur's 1964 Reminiscences, the latter being number 1 of a limited edition run. While political and military figures predominate, there are also signatures from writer Harriet Beecher Stowe and poets Henry Longfellow and John Greenleaf Whittier. For those who collect the signatures and manuscripts of America, this is a most noteworthy collection.

Anything signed by Abraham Lincoln is highly collectible, but here is a most interesting letter, written on the eve of his celebrity as a national figure, which would arise from the famed Lincoln-Douglas debates of 1858. It also illustrates his evolving role from lawyer to politician. It is an appeal to friend and fellow Illinois Republican political leader Gustave Koerner, an abolitionist German immigrant, for assistance. Koerner played an important role in rallying fellow Germans to the Union cause a few years later. The Democratic legislature had passed a reapportionment measure that had gerrymandered legislative districts in their favor. Republican Governor William Bissell, in a moment of absentmindedness, signed the bill, quickly crossing out his name when he discovered the mistake. The Democrats then sued in court to force the Attorney General to enforce the law, on the grounds that the Governor could not later change his mind once he signed a bill into law. Ultimately, lawyer Lincoln and the Republicans proved successful, the court ruling that the Governor could change his mind while the bill was still in his possession. Lincoln's letter to Koerner asking the latter to consult on the case is offered as item 24. Priced at $32,000.

Item 7 ties together two of America's least-loved figures of its early days. Aaron Burr, who came within a hair of being elected president in 1800, would seal his infamy when he killed Alexander Hamilton in a duel a few years later. However, his reputation would further descend when he engaged in an action, whose aim is still in doubt today, but apparently was intended to set up an independent state in the southwest. He was tried for treason and acquitted, but any hope for restoration of his reputation was long gone. The other discredited figure mentioned in this document is Benedict Arnold, and he needs no introduction, his name long ago becoming synonymous with "traitor." Way back in early 1776, 20-year-old Aaron Burr served as an aid to General Arnold. On May 17 of that year, Burr wrote out an order for the return of some armaments, noting that it was, "By Order of Genl. Arnold..." Item 7. $3,250.