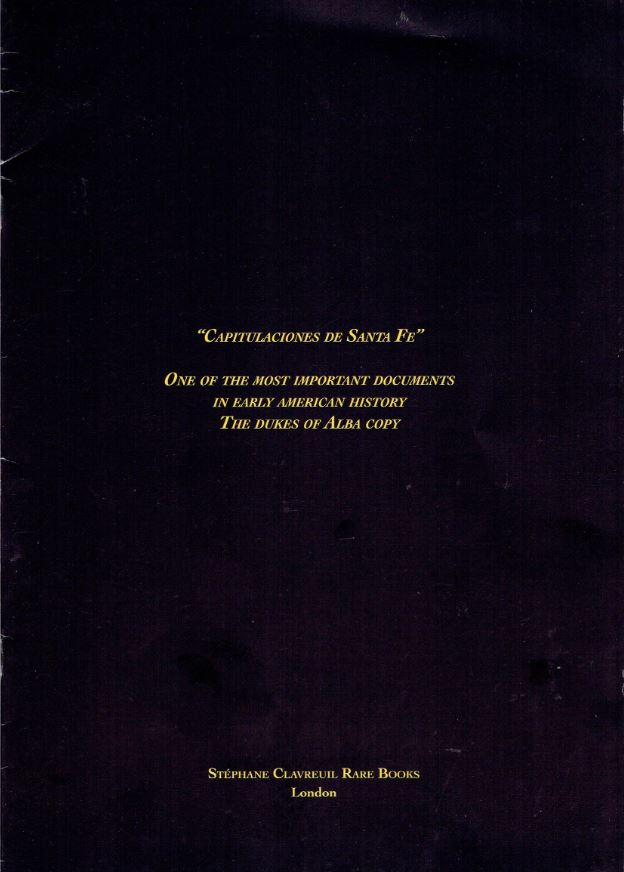 Stéphane Clavreuil Rare Books has issued a most unusual catalogue. It contains but one item, Capitulaciones de Santa Fe (Capitulations of Santa Fe). This is the sole surviving copy of the first printed version of one of the most important documents in American history. The Capitulations is the document whereby Christopher Columbus was enabled to sail on his voyage to discover America by King Ferdinand and Queen Isabella of Spain.

Columbus had tried for many years to find a European power to finance his plan to sail to Asia by a westerly route, which he believed would be shorter than going around Africa. Most thought he underestimated the distance. Columbus was repeatedly rejected. Finally, at the beginning of 1492, he received an audience with Queen Isabella, who also rejected his plea, but was later persuaded by King Ferdinand. They had a deal. It just had to be written up. It took three months, but what was finally produced was the Capitulations of Santa Fe (Santa Fe being a town in Granada Province where it was created).

Columbus was promised some benefits which, if honored today, would be of incalculable value. He was promised several titles, including Admiral of the Ocean Sea and Viceroy. They were to be passed down to his descendants, and to this day, there is a living Christopher Columbus who retains these titles, though they are more honorifics now. He also was granted 10% of all the riches obtained from his discoveries. That part, sadly for the Columbus family, no longer is observed.

The original Capitulations of Santa Fe was written in manuscript, dated 17 April 1492. It has been lost. The oldest surviving manuscript copy was produced in 1493. This first printed edition was long thought to have been printed in 1497. However, research in 2014 has led to the conclusion that it was printed circa 1528. As such, it was evidently printed as part of the Pleitos colombinos. These are the Columbus lawsuits, that continued from the beginning of the 16th century until 1536, and in minor disputes for centuries later. The deal was too good to be true for the Columbus family, but it began to fall apart early, and Columbus himself was partly to blame.

Columbus returned to rule his newly discovered lands, which was mostly Hispaniola, though his deal would technically today entitle him to 10% of everything produced in North and South America as well. However, Columbus was not exactly a kindly ruler. He could be downright brutal in his treatment of the natives, leading others to seek his removal as their Governor. Meanwhile, Columbus' health declined, and in 1506, he died. From this came the Pleitos colombinos, carried on by Columbus' son, Diego. He won some, lost some, and everything was regularly appealed. Diego died in 1526, whereupon the suits were continued by Diego's wife on behalf of their son, Luis. It was sometime around this point in the suit that this printed version of the Capitulations of Santa Fe was produced, evidently for use in the proceedings.

Ultimately, the family had certain titles and authority restored, and they were granted what amounted to a pension. The title of Admiral of the Indies was granted Columbus' descendants in perpetuity, which is why there is someone named Christopher Columbus who is Admiral of the Indies and other titles today. However, the great wealth produced in the land would not be theirs. Fame, but not fortune.

This copy belonged to the Dukes of Alba. Diego Columbus married the daughter of the First Duke of Alba, at the urging of King Ferdinand. She was not Diego's first choice, but she provided excellent connections.