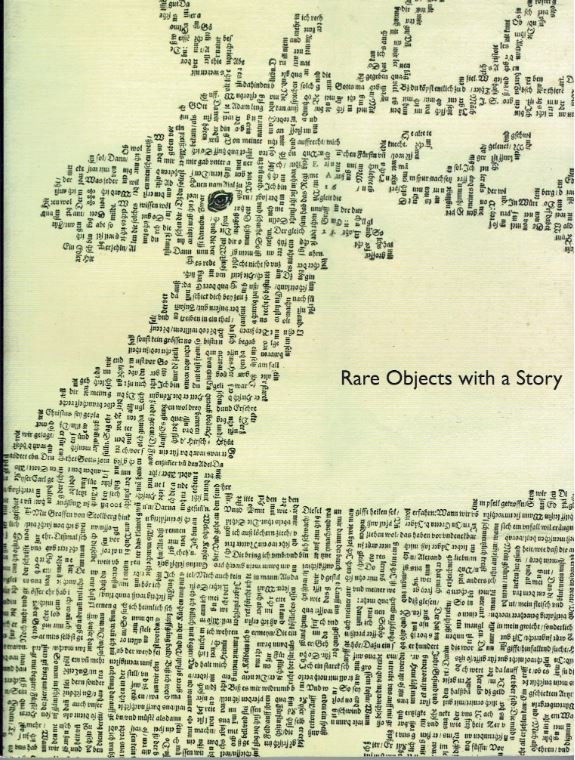 Antiquariat Dasa Pahor of Munich, Germany, has issued a catalogue of Rare Objects with a Story. This is a catalogue unlike any other I have seen. Not only do these items have a story, Dasa Pahor has told these stories in unparalleled thoroughness. With 215 pages to cover 30 objects, they have explained each item and its place in history with the level of completeness collectors will very much appreciate. You may wish to own something in this catalogue, or it may not fit your needs, but whatever decision you make, it will be an informed one.

It is hard to put a label on the material offered herein. Pahor has selected items which "due to their rarity, artistic merit and intellectual interest will maintain a certain timelessness." Within this, subjects and types of paper (beyond books alone) vary. This catalogue contains many maps, which the booksellers describe as "close to history," that is, they relate directly to new (contemporary) expeditions and surveys. One of their specialties, the Slavic World, is represented. Heraldry and genealogy are presented. Then there are items that combine art and text. That last statement leads us to this first item, which combines art and text in a unique manner.

Item 2 is an unusual representation of the Duke of Sussex, Prince Augustus Frederick, sixth son of George III. The Duke was a bit of an eccentric, but he represented some of the most liberal and humane ideas of his time. He supported abolition of the slave trade, Catholic Emancipation, the Reform Bill, the rights of Jews in what was still a time rife with anti-Semitism, opposed the use of physical punishment in the military. He was a strong supporter of scientific study and saw it, rather than contrary to religion, as providing the best window on God. The Duke was also an active Freemason and book collector, with a library exceeding 50,000 volumes.

The portrait of the Duke of Sussex herein offered was the work of Louis Gluck Rosenthal. Gluck was an immigrant from today's Poland, a Jew who appreciated the Duke's support for his community. He also was an artist of an unusual type. He was a micrographic artist, that is, he had the ability to write exceedingly small text. As an Orthodox Jew who took the Second Commandment, that against making images, broadly, he did not draw typical portraits. However, a rabbinic interpretation of the law allowed for the fashioning of text into unusual shapes so long as it was still text. That enabled Gluck to practice his art, which was to weave very small text into a shape that looked like a drawing unless you looked at it from very close up, where in the lines forming the image reveal themselves to be text. What he accomplished, on a grander scale, is similar to the item displayed on the cover of this catalogue (no longer available), an image of a deer formed from tiny text. The text consists of a lengthy biography of the Duke, which Gluck also had published separately for those who would struggle to read it in his image of the Duke. The micrographic drawing was created in 1843, a tribute to the Duke of Sussex in the year he died. Priced at $17,500.

Next is the earliest printed map of Lorraine, or any part of France. It is the 1520 issue (virtually identical to that of 1513) of Martin Waldseemuller's map of Lorraine, from the second edition of his atlas. It was the first map to be printed in three colors (black, red, and green). This is an unusual copy as it contains additional contemporary hand coloring, where most maps have only the three printed colors. René II, Duke of Lorraine, brought Waldseemuller out of obscurity to become one of the era's greatest cartographers. A map of Lorraine in his atlas was certainly appropriate. Waldseemuller is best known for a small comment on his map of the New World of 1507. He put the name "America" on it. Interestingly, he removed that name from his 1513 map. The most likely explanation is that in 1507, he thought the land was discovered by Amerigo Vespucci, but by 1513, he realized it was Columbus who found it first. It didn't matter. Waldseemuller's name stuck to the continents. Item 16. $5,500.

Item 11 is the separately printed Provincia Quitensis, the 1751 map of the Province of Quito. Quito covered parts of several countries in northern South America, with the most notable feature the fact that it shows the entire length of the Amazon River. This map, prepared by the Jesuit father Carolo Brentano, was the first map to show the area, and in particular the Amazon Basin, in mostly accurate detail. Father Brentano was assigned to Quito in 1724. He served in South America in increasingly important offices until 1748, when he was called back by the Vatican to be chief administrator of the Jesuits in Latin America from their offices in Rome. Rather than taking the direct route, he chose to first ride down the Amazon to its terminus in Brazil. Unfortunately, though Brentano was a Jesuit, he came from Spain, and Brazil was Portuguese, so authorities did not trust him. He was locked up, escaped, recaptured, and finally let go when they realized he truly was an important Jesuit. Brentano arrived in Rome in 1751, with plans to publish an extensive manuscript about Quito and his many years there along with his map. However, he died the following year under mysterious circumstances and his manuscript was lost. Only his map remains from his years in South America. $20,000.

We would not say this next item celebrates an event, but it does recount one: Angestellite betrachtung uber die den I. November 1755. This 1756 pamphlet from Germany describes the Great Lisbon Earthquake of 1755. We have experienced some terrible earthquakes in America, but this one was beyond even our imagination. Estimates are that it struck at 8.5 – 9 on the Richter scale, many times the power of the 1906 San Francisco quake. It is estimated that 60,000-100,000 people died. No one really knows. Eighty-five percent of the city's buildings were destroyed by the quake and the ensuing fire. On top of this, those who survived the shocks witnessed another terrible event. The water in the city's harbor disappeared. It would soon be followed by the inevitable – an enormous tsunami that washed many others away. This pamphlet, published by Augsburg newspaper publisher Johann Andreas Maschenbauer, includes numerous "special reports" from eyewitnesses, along with theories as to its cause, accounts of historic earthquakes, and the history and geography of affected regions. There are also nine maps and views. Beyond the death and destruction, the most lasting effect of this earthquake was that the enormous cost of rebuilding depleted funds that would have been used to expand Portugal's empire, essentially ending the country's ambitions of being a major colonial power. Item 20. $2,800.

Antiquariat Dasa Pahor may be reached at +49 89 27372352 or antiquariat@pahor.de. Their website is located at www.pahor.de.