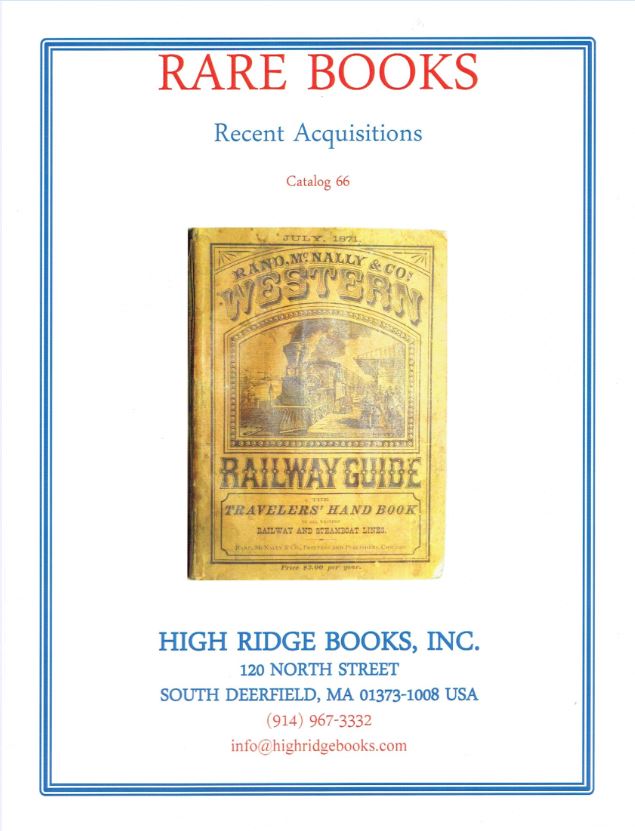 High Ridge Books has published their Catalog 66 Rare Books Recent Acquisitions. There is a wide variety of material available here, including some very old European books. Nevertheless, the concentration is in America, with much that would be of interest to 19th century travelers and settlers. Many of the items herein are American atlases and maps, from railroad guides, to local directories, tourist and immigrant guides, and insurance maps. You don't know what you may find, but a lot of it will help you get around. Here are a few samples.

We begin with an important report concerning early transportation in America. In 1825, the Ohio General Assembly published this Report of the Canal Commissioners, to the General Assembly of Ohio. This was before the railroads had spread very wide and canals were still the preferred method of hauling substantial quantities of freight. A couple of routes were proposed for a canal which would link Lake Erie with the Ohio River. Once completed, it would link New York and the Atlantic, via the Erie Canal, with New Orleans and the Mississippi via the Ohio River. Shipments could readily be made from one end of the country to what was effectively the other in the days before the West was settled. A notable development is recorded herein, the decision to have the Lake Erie terminus be in Cleveland. At the time, Cleveland was a small town with a few hundred residents. The canal would soon change that community's place in history, leading to its rise from small town to major city. Item 80. Priced at $425.

Flooding in New Orleans has been a major concern since long before the devastation of Hurricane Katrina. The city built levees to protect itself from flooding of the Mississippi River, but steamboat Captain John Cowdon was not convinced this was sufficient. He had an alternate plan, as explained in The Outlet System; Its Effect on the Commercial and Agricultural Industries and Sanitary Conditions of New Orleans and the Mississippi Valley, published in 1881. Cowdon noted that the river flows faster upstream than down because of a steeper decline in altitude. The result is the fast flowing waters become slowed downstream during a flood, inundating New Orleans and other areas. His answer was to cut an opening from the Mississippi to Lake Borgne, long ago eroded into an outlet of the Gulf, not a true lake. Since the drop in altitude to Lake Borgne would be much shorter than following the river's path through the delta, this would enable the Mississippi to drain faster before flooding the city. He doubted whether the levees would even be necessary if this were done. It was a nice theory, but did not take into account Hurricane Katrina, where not only did the river flood, but the storm surge raised the level of the water in Lake Borgne. Item 54. $475.

Jeremiah Greenleaf was a Vermont atlas publisher. In 1842, he created an atlas, though the maps were mostly based on David Burr's atlas of a few years earlier. In 1848, he republished the atlas with changes. Item 9 is a copy of the 1848 update of his Universal Atlas. A few new maps were not from Burr, such as one of Texas, a bit dated as it shows Texas during its Republic time. However, Florida has achieved statehood. The Wisconsin/Iowa map is also new. Iowa is mostly undeveloped, only a few counties in the east shown, while its northern border extends all the way to Canada. $9,500.

Here is a guide for those looking to do some touring. Item 20 is Bachelder's Illustrated Tourist's Guide to the United States. Bound with: Popular Resorts and How to Reach Them... John Bachelder's tourist guide was published in 1873. The second part features various resorts from Pennsylvania to Maine, including Martha's Vineyard and Shelter Island. The first section is focused primarily on Gettysburg, and includes his large folding Panorama of the Gettysburg Battlefield. It's interesting how soon after the Civil War Gettysburg became an attraction for the curious. $575.

This is a book that will tell you a few things about Napoleon. Warning – it might not be entirely objective. The title is Some Account of the History and Character of Buonaparte: Shewing that He is Degraded by Every Vice which Brands with the Epithet of the Infamous; and that He is Possessed of No Virtue... published in 1814. It was released prior to Waterloo, but the anonymous author correctly predicted that if the Allies hang in there and pursue the battle a little longer, they will put an end to "this impudent usurper and atrocious and execrable Tyrant." Whoever the author was, he didn't much like Napoleon. Perhaps we can explain his feelings based on the publishing location – London. Item 66. $350.