Charlie Russell and the American West from Doug Johns 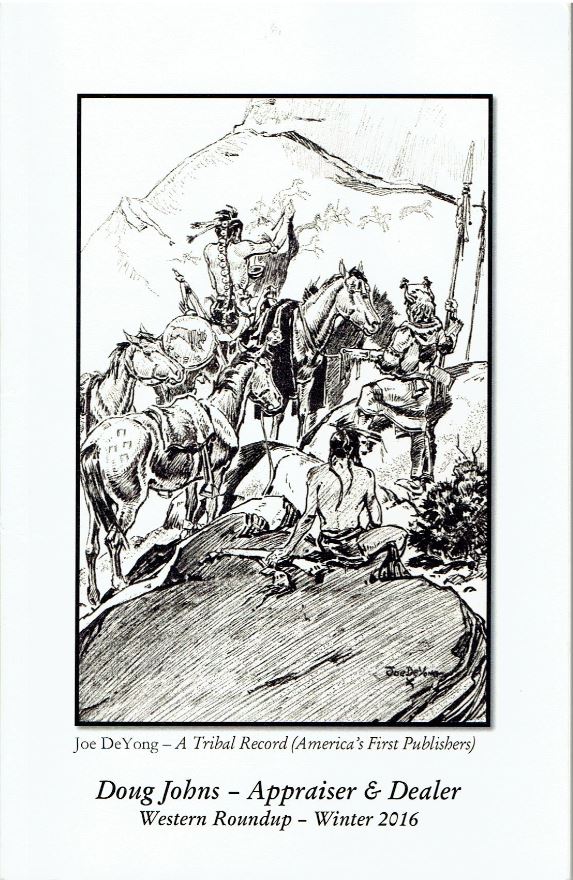 Charlie Russell and the American West from Doug Johns

Doug Johns – Appraiser & Dealer has issued a catalogue entitled Western Roundup. A few items may take us east of the Mississippi, but most pertain to the West, and the Old West in particular. Half of the material relates to the legendary western artist C. M. "Charlie" Russell. Russell was also an author, and certainly an adventurer, but his paintings and sculptures of western America, created in the late 19th and first quarter of the 20th century, are his calling card. In addition to Russell, there are sections on firearms, Native Americans, western fiction, western Americana, Americana, bibliography, and art. Here are a few of the items to be found.

We will start with the first item in the catalogue as it is certainly a special one for Russell collectors. Item 1 is a first edition of Russell's Studies of Western Life with a copyright date of 1890. This is a portfolio of 22 plates on 12 leaves reproducing Russell's artwork. The drawings included topics such as (naturally) cowboys and Indians, roping, bronc busting, cow punching, camps, teepees, and such. This copy was once part of the Estelle Doheny collection. Estelle Doheny was the wife, and for many years widow, of enormously wealthy oilman Edward Doheny. She was one of the most important book collectors of the 20th century. Priced at $6,000.

Next up we have a lady who could compete with any cowboy for eccentricity, though she only spent a brief part of her life in the American West. British woman Therese Yelverton met Charles Yelverton, Viscount Avonmore, on a steamer. They fell in love. However, Charles was an Irish Protestant and Therese an English Catholic. Such marriages were illegal in Ireland at the time. They married secretively. All likely would have been ignored, but Charles soon dumped Therese and married another, whereupon she sued. She maintained it was a legal marriage; he that it was not. The trial was a sensation in 1861 and she became a celebrity. She won the trial but it was overturned on appeal. She was left broke, but still styling herself the Viscountess Avonmore, Therese turned to writing to survive. In the summer of 1870, she traveled to Yosemite. There she stayed at the primitive hotel operated by early Yosemite visitor and writer James Hutchings and his family. It coincided with the two years that Scotsman John Muir showed up looking for work, and the "Viscountess" became attracted to him. He got out of there. Her time in Yosemite became the basis of her novel Zanita: A Tale of Yo-semite, published in 1872. Muir became the inspiration for the hero of the story, Kenmuir, while the Hutchings' daughter Florence, the first non-Indian born in Yosemite, was Zanita. Item 207. $300.

This man was hardly a cowboy, and yet he came to epitomize the West for many Americans in the early 20th century. His name didn't even sound much like that of a cowboy, no "Buffalo" or "Kid." William S. Hart was born in Newburgh, New York, lived the first half of his life in the East, and became a Shakespearean actor on Broadway. The turn of the century found him living in Brooklyn. Nonetheless, he became fascinated with the Old West, and with the advent of films, headed for that western location, Hollywood. He became friends with western legends Bat Masterson and Wyatt Earp, the latter of whom retired to Los Angeles. Pushing the age of 50, Hart began appearing in silent films, and quickly became the foremost western actor of the day, the first real western movie star. Item 34 is his autobiography, My Life East and West, published in 1929. It contains some material on Masterson, Earp, and Wild Bill Hickok. The dust jacket features an illustration of Hart on horseback by Charlie Russell. It is signed to Hart by Russell. The book itself is inscribed by Hart. By this time, younger cowboys had replaced Hart as box office attractions and his career did not carry over to "talkies." $300.

The next item is one of those non-western exceptions. Rather, it is an account of imprisonment in Maryland during the Civil War. The author was not pleased with his imprisonment, which can be gathered from the book's title, Fourteen Months in American Bastiles. The author was Frank Key Howard and his book was published in 1863. Howard was a Baltimore newspaperman whose sympathies tilted to the South. After the war broke out, there were riots in Baltimore. Lincoln dealt with them by suspending habeas corpus. Howard wrote scathing editorials against the move, whereupon he was arrested and incarcerated at Fort McHenry, his "American Bastile." There is much irony to this. It was the bombing Fort McHenry during the War of 1812 that Frank Key Howard's grandfather, Francis Scott Key, wrote about in his poem, which when set to music, became the Star Spangled Banner. Item 270. $85.