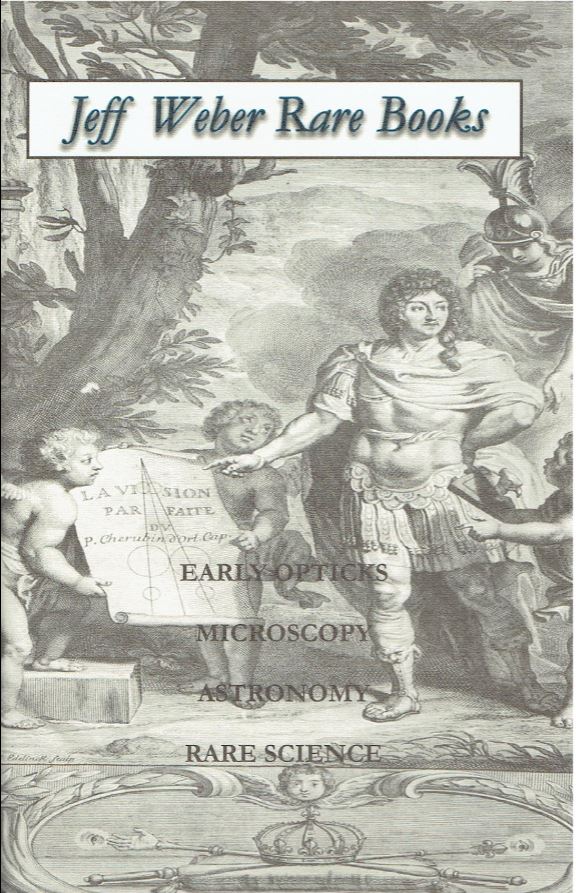 Here's looking at you. Jeff Weber Rare Books has issued a catalogue of Early Optics, Microscopy, Astronomy & Rare Science. With works from the 17th to the 20th century, it presents pieces of the journey to better understanding the science behind what makes the world visible, along with various other scientific topics, from geology to biology, and several works on mathematics, probability in particular. Weber notes that they recently acquired the optics and microscopy library of a private collector, the depth of which made it a significant collection. Here are a few samples from the 35 items offered in Weber's Catalogue 183.

We begin with what was likely the most important textbook of the 18th century in optics. Robert Smith was a follower of Newton, explaining his views in A Compleat System of Opticks: in four books, viz. A Popular, a Mathematical, a Mechanical, and a Philosophical Treatise... published in 1738. It covers not only optical theories, but extensive information on designing and manufacturing telescopes, celestial discoveries, and geometrical theories. Smith helped to make Newtonian theories such as the particulate theory of light more accessible to students. Item 35. Priced at $2,850.

Gaspard de Courtivron was another Newtonian, though more of an amateur scientist than was Smith. He was a military man who studied science to advance his career. However, a war injury forced him to abandon that career and turn to science full time. Item 14 is Courtivron's Traite d'Optique, published in 1752. He adopted Newton's theory of light particles, but had an interesting (and incorrect) theory as to why white light refracted into separate colors. He believed the particles of different colors traveled at slightly different speeds. He attributed their spreading out into a rainbow as refraction being affected by the particles' speed. The slower the speed, the greater the refraction, so in the case of red, which is least refracted, its particles traveled at the highest speed. $3,750.

Charles Babbage is known by many as the "father of the computer." Working in the early 19th century, he realized human computations were plagued with errors and set about designing a device that could accurately and consistently make computations. Rather than an electronic computer as was designed over a century later, he devised mechanical devices, complex, large creations that never quite were finished. However, while Babbage is remembered for computing, he was learned in many fields. This next item is a geological treatise he privately published in 1847: Observations on the Temple of Serapis at Pozzuoli near Naples. With an attempt to explain the causes of the frequent elevation and depression of large portions of the earth's surface in remote periods... Babbage concluded that portions of the earth rose and subsided over time. He used the Temple of Serapis to demonstrate this. The temple had been built by a hot springs near the sea in ancient times. In the years since it was abandoned, the temple often has been covered by water. The encrustations on the columns at the bottom showed both sea water and water from the hot springs had entered, since the chemicals in each would not by themselves generate such deposits. Later on, solid material built up, sealing off the sea and allowing only spring water to enter. Babbage continued to use layers in the temple to conclude what changes had occurred, which he attributed to motion of the earth's surface. Item 4. $3,750.

Item 8 contains the Atlantic Monthly from the second half of 1945. Within it is a groundbreaking article, As We May Think, by Vannevar Bush. Bush, who was one of the developers of the first atomic bomb, was envisioning a more useful contribution to humanity in this article. It is something of a precursor to the concept of the internet. People weren't hooking up computers in those days since essentially they did not yet exist. What Bush was envisioning was a device storing huge amounts of data on microfilm. His device would enable various connections to be created that would reach the underlying material in different ways. He called his system "memex," for memory index. It would operate something like the human mind. Today, we might think of it as working like a search engine, or a series of links. It would not have functioned quite like today's internet, but it did serve as an inspiration for those who created its connections later on. $800.

Jeff Weber Rare Books may be reached at 323-344-9332 or weberbks@pacbell.net. Their website is found at www.WeberRareBooks.com