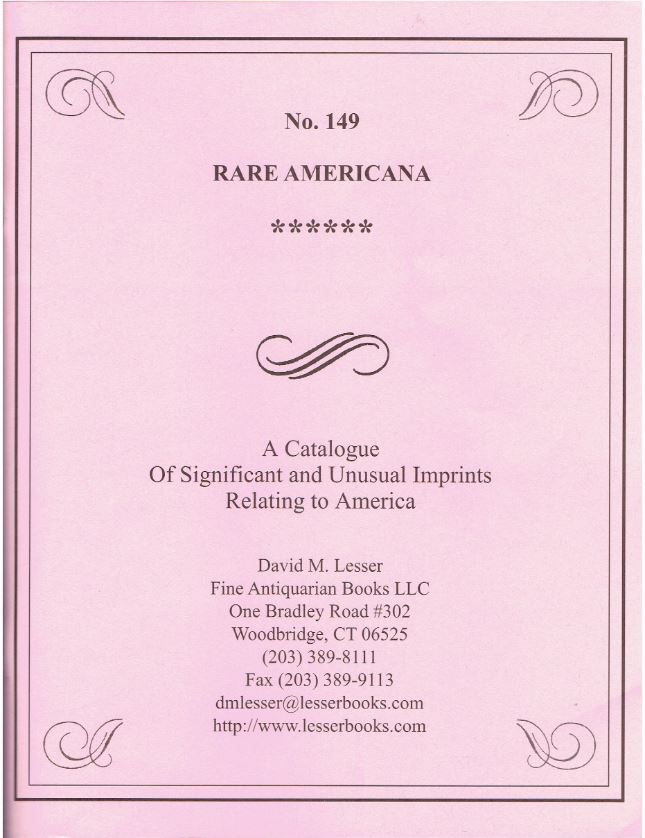 David M. Lesser Fine Antiquarian Books has released their 149th catalogue of Rare Americana. The type of material you will find in Lesser's catalogues is consistent, but the individual items are constantly new and exciting to find. Most items offered are pamphlets, broadsides, other documents and manuscript letters. They cover America in the period from the Revolution to Reconstruction, a few outside of those time boundaries in either direction. In looking at the concerns of the day, so many involving slavery, abolition, the Civil War and the days following, it is striking how much of a role race has played in our history, and not in a good way. Today, we are still fighting racial battles. You would think we could finally decide to resolve this issue once and for all and get on with the challenges we all confront together. Evidently, we can't. It's very hard to understand. Here are some of the intriguing items you will find in this latest catalogue.

Most of these racial issues might well have been avoided if Americans had listened to Arthur Lee back in colonial days. Arthur Lee was a physician and member of the notable Lee family of Virginia, that produced many Revolutionary leaders and later on, ironically considering Arthur's views, Robert E. Lee. Arthur Lee was a strong proponent of American liberty and the revolutionary cause, as well as a comparably strong opponent of slavery. He served the Americans as a representative in England and France during the Revolution. Item 76 is Lee's Extract from an Address in the Virginia Gazette, on March 19, 1767. By a Respected Member of the Community. This is one of five known reprintings of the then 26-year-old Lee's comments, possibly from 1780. In it, Lee says that "freedom is unquestionably the birth-right of all mankind, Africans as well as Europeans." He further states, slavery "...is a violation of both justice and religion; that it is dangerous to the safety of the community in which it prevails; that it is destructive to the growth of arts and sciences; and lastly, that it produces a numerous and very fatal train of vices, both in the slave, and in his master." Priced at $1,500.

Here is another man's pleas that should have been heeded. Late in life, former British Prime Minister William Pitt (the Elder) shared Lee's concerns about British oppression of liberty in its American colonies. He saw no good in it, recognizing the colonists would not stand for such actions as taxation without representation. He expressed his thoughts in The Speech of the Right Honourable The Earl of Chatham, in the House of Lords, January 20th, 1775. Expounds Pitt, "Let the sacredness of their property remain inviolate; let it be taxable only by their own consent, given in their provincial assemblies." Pitt called for the removal of British troops from Boston, whose presence was leading to ferment in not only Boston but across the quickly uniting colonies. His pleas were ignored, and the rest, as they say, is history. Item 108. $2,000.

Item 31 is a Civil War recruitment broadside, not an unusual item but for the audience it targeted – black Americans. For most of the war, the Union avoided them. Despite abhorrence for slavery among many northerners, that did not necessarily translate to affection or respect for African Americans. It wasn't until the latter stages of the war, the Union needing more troops, that appeals finally went out. This one would have come from 1863 or later. On one side, it simply proclaims, "All Slaves were made Freemen by Abraham Lincoln, President of the United States, January 1st, 1863. Come, then, able-bodied Colored Men, to the nearest United States Camp, and fight for the Stars and Stripes." The other side features a dramatic color illustration, a proud black soldier with a sword in one hand, an American flag in the other. In the background are black soldiers, while another black man is freed by them from his chains. Yet another black man sits in a chair reading a newspaper, a school in the background. $9,500.

Next we have a very interesting letter pertaining to the aforementioned Abraham Lincoln, and the burdens he carried in life. We know that his presidency was a difficult time, but this letter from a contemporary indicates he may have been afflicted with melancholy even before. The letter was written by Whitelaw Reid on December 27, 1910, to Judge Willard Bartlett of the New York Court of Appeals. This came near the end of Reid's life, but he had been a man in his 20's when Lincoln was President. He was also a loyal Republican. He had been Horace Greeley's editor at the New York Tribune, and purchased the paper after Greeley died. His loyalty to the Republicans earned him several important positions, including a couple of ambassadorships and a representative of America to the peace negotiations following the Spanish-American War. Reid also belonged to a very select group of individuals that includes Sarah Palin and John Edwards. He was the vice-presidential nominee on a losing major party ticket. He was the Republican nominee in 1892 when Benjamin Harrison lost his bid for reelection. Therefore, you don't remember him like you do the man who served under Harrison when he did win the election – Levi Morton. We will quote at length Reid's comment about Lincoln as it may tell us more about the man than we realized: "I am greatly interested in your having carried away from your interview with Mr. Lincoln the feeling of his profound sadness. This was my impression of him when I first met him, on one of his trips East after the Lincoln-Douglas debate. Always afterwards, whenever I met him, what impressed me most was not his tendency to tell stories, but the obvious melancholy which he seemed always to feel, though he rarely expressed it. So too Hay, Nicolay, Hitt and every other young man of that day who was admitted to much intimacy with him always felt his sadness more than any other trait in his character." Item 113. $750.

This one on the surface sounds sympathetic to the Jews, though the Jews themselves were probably less impressed. Item 5 is Israel's Advocate; or, the Restoration of the Jews Contemplated and Urged. It was published by the American Society for Meliorating the Condition of the Jews in 1825-1826. What probably generated much reticence from their target audience is that the purpose of the organization was to convert the Jews to Christianity. In rather dramatic language, the group expresses, "And though, by crucifying the Lord of glory, they have contracted a tremendous load of guilt; and though they have ever since been outcasts from God, and hated, despised, and oppressed by the nations of the earth, yet 'they are still beloved for their fathers' sakes'" With friends like these... $500.