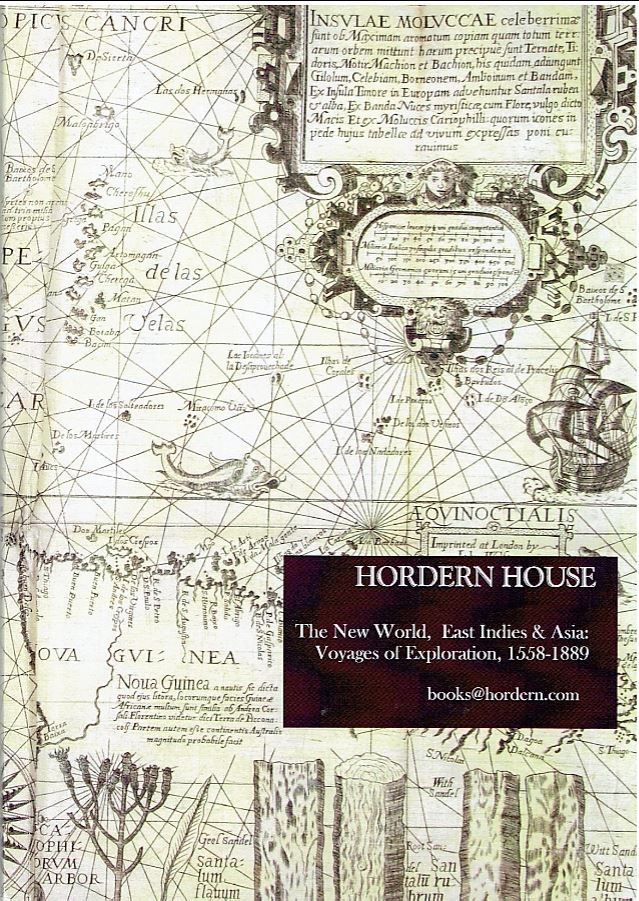 Hordern House has issued a catalogue of The New World, East Indies & Asia: Voyages of Exploration, 1558-1889. It is filled with travel accounts, generally on the Pacific side of the globe. Hordern House is located in Australia, explaining the Pacific orientation. There are many works which pertain to America, though again, they are journeys which came to the continent from the west. This collection includes many of the most important and rarest of travel accounts from the Age of Discovery. Here are a few.

This book will bring us up to date on most voyages from the first century of exploration and a little more. Richard Hakluyt created a compendium of voyages as of the end of the 16th century. His primary concern was capturing all of the English explorations, but his book includes many of those from other nations as well. He originally published a one-volume collection in 1589, but a decade later, he came back with this greatly expanded edition in three volumes: The Principal Navigations, Voiages, Traffiques and Discoveries of the English Nation, published 1598-1600. There is much of interest to collectors from America as the third volume covers travels to the New World a couple of decades before the Pilgrims set sail. Hakluyt's voyages is regarded as one of the most important travel books ever published. Item 14. Priced at $52,500 (while Hordern House usually lists prices in Australian dollars, this catalogue was brought to the recent California Book Fair, so all prices are in American dollars).

As thorough as Hakluyt's work was, Samuel Purchas came back a few decades later with an even more extensive collection of voyages. In 1625-1626, he published a five-volume set, Hakluytus Postumus or Purchas His Pilgrimes. It covers over 1,200 worldwide voyages. Item 32. $115,000.

This is one of the most remarkable travel books you will ever find. Giovanni Botero used the information coming back to Europe from travelers to write an important political geography. First published in 1591, it provided extensive information about lands around the world, such as was then known, and maps of these distant places. While 17 editions were eventually published, there are two that are particularly notable. Item 3 is one of those, the 1622-23 edition of Le Relationi Universali... It is the woodcut illustrations in these editions that grab your attention. Botero used older woodcuts, including some that had been lying around over a century, to illustrate his book. Some were based on actual people and places, but others were of fantastic creatures that one might imagine existed along the edge of the world, places not yet reached. Oddly, Botero didn't distinguish between the two. Among the images are those of headless men with faces on their chests, and one of these has a serpent's head rising from a long neck. Another is a man with a huge foot (bigfoot?) used to shade himself from the sun. There is a man with the head of a dog, a man and a woman, normal looking, but they are chopping up arms and legs like butchers. It's nice to have a good imagination, but these are a bit extreme. $38,500.

Next is one of the rarest and most important Cook items. As the lengthy title indicates, the subject matter goes beyond Cook himself: A Narrative of the Death of Captain James Cook. To which are added some Particulars, concerning his Life and Character, and Observations respecting the Introduction of the Venereal Disease into the Sandwich Islands. The author was David Samwell, who served as a physician on Cook's third and final voyage. The official account suppressed the details of and responsibility for Cook's death in Hawaii. Samwell was more open. As for introducing venereal disease to the Sandwich Islands (Britain's early name for Hawaii), this was a sad case of European explorers passing on what they discovered in America in Columbian times to the Hawaiian Islanders. Item 34. $220,000.

Item 4 is a manuscript account of the first half of a circumnavigation performed by Hyacinthe de Bougainville in 1824-1826 on board the Thétis. Hyacinthe was the second of the Bougainvilles, father and son, who both completed circumnavigations on behalf of France. Bougainville was sent out to reestablish ties with Vietnam, but that mission proved unsuccessful. The Emperor would not meet with him, concerned that Christian missionaries were turning his people away from their traditional ways. Bougainville would also make stops in China, the Phillippines, South America, and three months in Australia, where he dedicated a monument to French explorer La Pérouse, who disappeared after leaving that continent. His account appeared under the title Voyage autour de Monde de la frégate la Thétis. His manuscript was given by the author to another French explorer, Bougainville's mentor Louis de Freycinet. Freycinet had performed a circumnavigation a few years earlier and was hungry for any information he could obtain relating to voyages, so it is not surprising that his protege would provide him with such an account. $40,000.