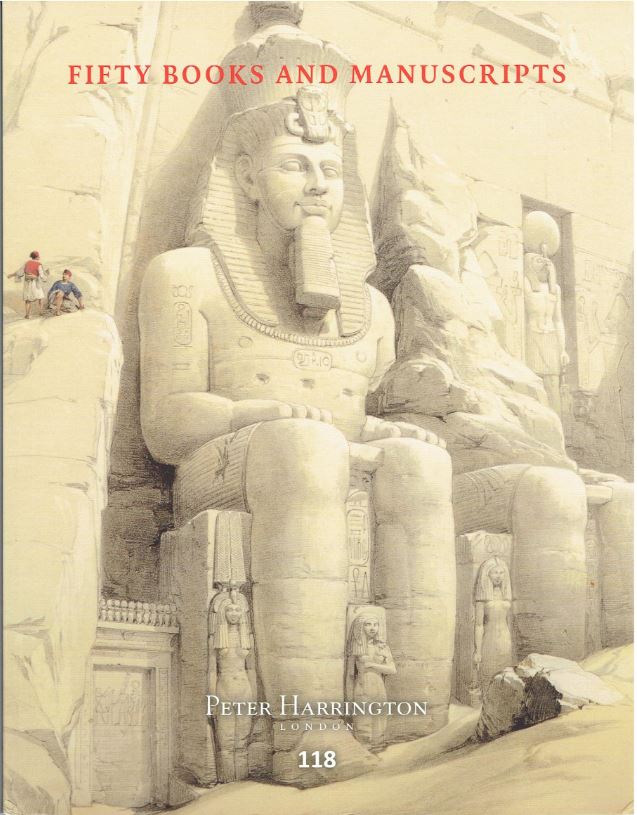 Peter Harrington has released a new catalogue in their "50" series, this one being Fifty Books and Manuscripts. These are not just any 50 books and manuscripts (mostly books). These are some of the most important books written. They cover diverse categories from fiction, poetry, history, religion, even children's books. It is their significance and desirability that is the common thread. Here are a few examples of what we mean.

We begin with an account of the real pirates of the Caribbean by one of the few of them who actually wrote a book (most pirates weren't particularly literate). Alexandre Exquemelin made his way to the Caribbean as an indentured servant. His second master was generous, teaching him the trade of what today sounds like an odd combination – barber/surgeon. They both use scissors. Exquemelin used his skills to serve on a privateering ship, state sanctioned piracy. Eventually, he served one of the most notorious of all pirates, Henry Morgan, when he sacked Panama. He finally returned to Europe, studied medicine in Amsterdam, and wrote this book about pirates. It has to be taken with a bit of salt as he adjusted his account for various audiences, the book being published in several languages. Nonetheless, it gives us the best firsthand look at piracy in the 17th century, including the brutal behavior that often came with it. Exquemelin later became a surgeon on legitimate ships, made his way back to America, and disappeared from history. Item 8 is the first English edition of his account, Bucaniers of America: or, a true Account of the Most remarkable Assaults Committed of late Years upon the Coast of the West-Indies... published in 1684. It comes with Basil Ringrose's 1685 Bucaniers of America, The Second Volume... about the piracy of Bartholomew Sharp. Priced at £12,500 (British pounds, or approximately $18,005 U.S. dollars).

Next up is an amazing copy of what is already one of the most collectible books – a first edition of The Great Gatsby, published in 1925. This copy is inscribed by author F. Scott Fitzgerald to his friend Harold Goldman, with the most interesting comment: "For Harold Goldman. The original "Gatsby" of this story, with thanks for letting me reveal these secrets of his past." Goldman worked with Fitzgerald as a screenwriter in Hollywood in the late 1930's, long after the book was published, so we will assume the comment is tongue-in-cheek. Whether they had a friendship predating this is unclear, though some family history indicates there may have been. Fitzgerald signs the location as "Alcatraz Cell Block 17," a reference to his office at MGM. He didn't like working there. This reference means the book was inscribed many years after it was published. Item 36. £275,000 (US $396,123).

From a signed book we go to a signed photograph. The image is of the then (and to some extent still) controversial scientist Charles Darwin. It was taken by Julia Margaret Cameron while Darwin was vacationing on the Isle of Wight. It was one of Darwin's favorite photographs of himself. It was taken in 1868, a decade after revealing his theory of evolution. Darwin was 59 years old at the time, but with his full white beard you might guess he was older. Item 18. £22,500 (US $32,410).

Item 39 is a signed typescript by Winston Churchill, who would be leading England through its most difficult time by the end of the decade. It was written for the Hearst newspapers, published on January 11, 1931. The title of the article was The United States of Europe. It was an argument for something that came about many decades later – the European Union. Churchill noted that Europe once had been united if you go back to Roman times. He thought Europeans would look at America, united with no borders coast to coast, and be envious. Of course, terrible splits and horrible regimes were beginning to appear in parts of the continent, but Churchill thought "the horrors of Armageddon are our present guarantee of peace." Not exactly. However, while being sympathetic to a European union, Britain would not be a participant. He saw England being connected to the English-speaking world. £30,000 (US $43,213).

We conclude with the final item in the catalogue, and a fitting way to close this book. This past month, well after the catalogue was printed, Harper Lee passed on at age 89. After half a century of literary silence, her long buried second novel recently was "discovered" and published. Its reviews were less than exciting, but her first novel remains an American masterpiece and classic. Item 50 is To Kill A Mockingbird, published in 1960. This is a first edition with the first issue dust jacket in unusually good condition. It is a legacy that will remain for generations to come. £25,000 (US $36,011).