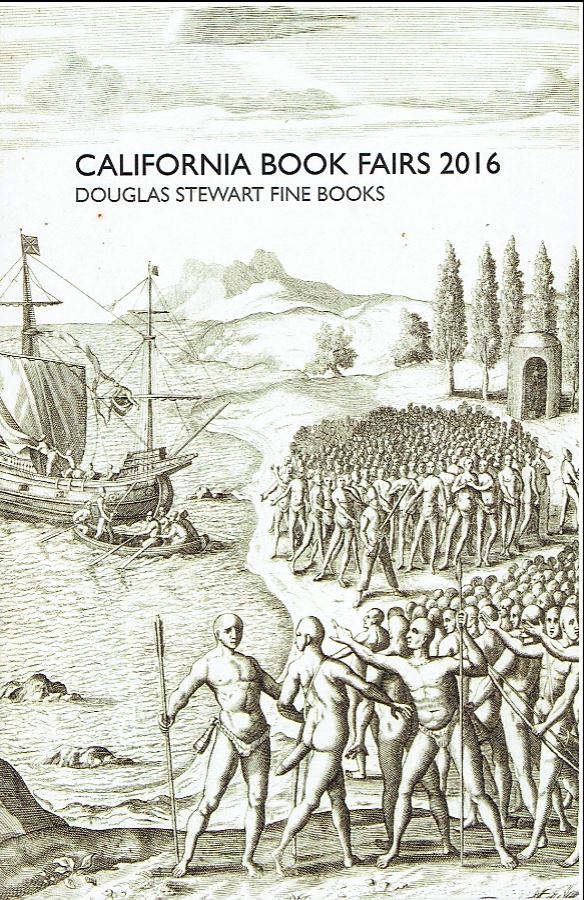 Douglas Stewart Fine Books recently prepared a catalogue for the California Book Fairs 2016. Stewart made the journey across the Pacific from Australia with some special items for American collectors. Much of it deals with travels and early explorations, covering locations in the Americas, Asia, Australia, and the Antarctic. Those trips were challenging, with the last ones very cold to boot. In a totally unrelated field, there are a few artists' books from the 20th century at the end, from artists including Andy Warhol and others. Here are a few selections from this catalogue.

We will start with that spectacular Peruvian collection, as this is a large assortment of material rather than a single item. All told, it includes 128 items. It was gathered over several decades by a private collector. Dates range from 1585-1817. Stewart notes the collection covers diverse subjects, including "ecclesiastical, theological, judicial, political, military, historical, linguistic, literary and scientific." The earliest book, Terecero Cathecismo, was the third or fourth book printed in South America. The majority of the items are Limenian imprints (published in Lima). Over 40 of those were printed prior to 1700. Two books are among the four printed by Father Bertonio from the Jesuit press in Juli from 1610-1613. All items were published prior to Peruvian independence in 1821. Item 1. The entire collection is priced at $750,000.

Here is another very rare item printed from a Jesuit press, but this one was on the other side of the world. Item 4 is Innocentia Victrix... attributed to Antonio de Gouvea. It is one of just 11 books printed from xylographic blocks (woodblocks) rather than type by Jesuit missionaries in China between 1662 and 1778. This one was the third, printed in 1671. It contains three Chinese scripts, a phonetic writing, and a Latin translation of an imperial edict providing official tolerance for Christianity. This was significant at the time as there were fears Christianity was being used as part of an attempted takeover by the Portuguese. This book could have been used by missionaries for protection, or to assure prospective converts that they would be protected. $39,000.

Here is a book that was interesting and well-read in its time, but its enormous importance would not be revealed until a couple of decades later. Item 14 is a Narrative of the Surveying Voyages of the Adventure and the Beagle between the years 1826 and 1836. The first of the four volumes, by its commander, Phillip Parker King, covers the first of the two voyages in the Adventure, not of great importance. The second, by its commander, Robert Fitzroy, describes the second voyage, in the Beagle, and this is of great significance. After a few years along South America, the Beagle proceeded to complete a circumnavigation, but this is not what was significant either. What was important was Fitzroy's selection of a naturalist for the trip, a young Charles Darwin. Darwin carefully studied flora and fauna on the mainland of the continent and on islands offshore, noting similarities and differences. He also excavated fossils he found. The third volume of this set was written by Darwin, and it became the most popular part of it, later being separately published. The complete set was published in 1839. $85,000.

Two decades later, after years of study and evaluation of what he saw, Darwin released the book that shook up our understanding of ourselves and the world in which we live. Item 19 vies with a handful of titles for the most important scientific book ever written: On the Origin of Species, by Means of Natural Selection... It's been 150 years and some still find it controversial and upsetting. What Darwin observed in South America led him to conclude that plants, animals, and we ourselves, are the product of evolution, the means being natural selection, survival of the fittest. Item 19 is a first edition of this monumentally important book in its original binding. $135,000.

We need to have an Australian item for an Australian bookseller, so here is one of the most important voyages concerning that land down under. The book is A Voyage to Terra Australis by Matthew Flinders, published in 1814. Flinders commanded the first circumnavigation, not of the world but of the Australian continent. This was accomplished in 1801-1803, but the book was delayed as Flinders was imprisoned for 6 ½ years in Mauritius as he attempted to sail home. Flinders died the day after his book was published. The book includes remarkably accurate charts, maps, engraved watercolors, and an appendix of information compiled by the mission's botanist. Item 11. $44,000.